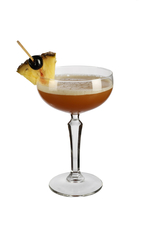 "I wish I could drink like a lady, I can take one or two at the most, After three I'm under the table, After four I'm under the host..."

The author, wit and journalist Dorothy Parker, one of the world's great drinkers, passed away on this day in 1967. Mrs Parker described her favourite words as "cheque" and "enclosed" and wryly observed of her abortion "It serves me right for putting all my eggs in one bastard". She is also often credited with the immortal line, "I must get out of these wet clothes and into a Dry Martini."

Martini Day is coming up. So, instead of a Martini, we will be toasting Mrs Parker with an Algonquin, our take on the classic cocktail. An unusual blend of rye whiskey and fresh pineapple, it takes its name from the hotel at which Mrs Parker's Algonquin Circle met to drink and wisecrack.

Alan Turing, the man who, fundamentally, established computer science, bringing us everything from Google Glass to smartphones and fitness watches, helped win the Second World War, and set a benchmark for artificial intelligence that's still in use today, died this day in 1954. He was only 41.

How did he die? Cyanide. But here is where the story takes a darker turn. Turing had undergone chemical castration through hormone treatment after authorities discovered he was gay - yes, really - so he might have killed himself. Yet he'd left a to-do note on his desk for the day after the weekend.

He might have accidentally ingested cyanide, a substance he'd been experimenting with. He might have deliberately dipped an apple into cyanide, to feed his Snow White obsession. Peter Tatchell has argued that the British security services murdered him.

We're toasting Alan Turing, and the foundations he laid, with a Sour Apple Martini, based around his favourite - and perhaps, on this day, fatal fruit - the apple.

... comment(s) for We remember Dorothy Parker