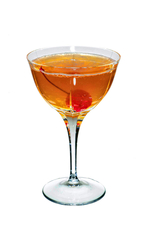 This day was established by the United Nations General Assembly (UNESCO) to maintain awareness of the importance of freedom of the press and to remind governments of their duty to respect and uphold the right to freedom of expression. It also marks the anniversary of the Declaration of Windhoek, a statement of free-press principles put together by African newspaper journalists in 1991.

Today UNESCO will confer its Guillermo Cano World Press Freedom Prize to an individual, organisation or institution that has made an outstanding contribution to the defence and/or promotion of press freedom. The prize commemorates a brave Colombian journalist, Guillermo Cano Isaza, who was assassinated by drug barons outside his newspaper office in Bogotá, Colombia on 17th December 1986.

As fans of freedom of speech, we are marking the occasion with - what else? -- The Journalist. This old school take on the Martini made its print debut in Harry Craddock's Savoy Cocktail Book back in 1930 and is, we feel, long overdue both exposure and press freedom.

On this day in 1913, the Coronation Cinematograph and Variety Hall, in what was then known as Bombay, opened its doors to movie-goers, showing India's first ever feature-length film, Raja Harishchandra.

And its producer, "the father of Indian cinema", Dadasaheb Phalke, would probably not have imagined that today Mumbai would be home to the world's largest film industry - by ticket sales and number of films produced, at least. Let alone that Bollywood would produce its very own scandals, from sex tapes to brawls, on a scale to rival Hollywood.

We're toasting Bollywood with a glass of an East India cocktail, to Doctor Cocktail's formulation.

Today is - or was - Beer Pong Day, a chance for folk to recreate their frathouse days and/or favourite Tara Reid movies with a rousing game of beer pong, and hone their skills for July's Masters of Beer Pong.

Yes, really. Beer pong, the team drinking game played by throwing ping pong balls into beer cups, has its very own Masters and World Series nowadays, and there's money to be won. Or, for those of you who prefer something a little more custom, there's a new up-and-coming booze sport to take its place. Alcohockey, from - where else?! - Canada, is, well, air hockey, played with a special table with holes for beercups drilled into it. And it's already reached at least as far as Hong Kong.

So, whether your poison is ale, stout, wheat or pilsen, there's never been a better day to enjoy a glass of the good stuff. We're taking ours as a Pale Charlie, an ale-tail from Michele Mariotti featuring extra goodness courtesy of absinthe and sloe gin. And... Dear Discerning Drinkers, please beer pong responsibly. Who doesn't, after all?