20 of the world's best-hidden bars 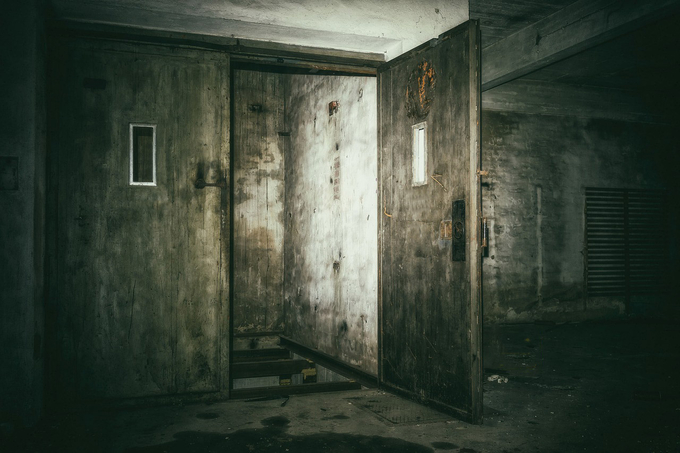 Say what you like about speakeasies, they give designers room to play. And from Lisbon to Seoul, from Phnom Penh to LA, operators have camouflaged their hidden bars in frankly spectacular ways. Here are 15 bars from around the world which take the hidden bar theme to new extremes – and five absolute classics of the genre.

Short back and sides, sir?

Sydney's The Barber Shop spawned a winning formula when it opened in 2013: an actual, real-life barber shop with a gin palace styled speakeasy out back. During the day, haircuts and shaves are on the menu in the fully-functioning store: by night, it becomes an atrium for Mike Enright's multi-award-winning hidden gin bar.
The Barber Shop, 89 York Street, CBD, Sydney

From Los Angeles nightlife kings - and hidden bar gurus - the Houston brothers comes this kitschy, 70s retro affair, entered by way of a garage sale so 70s it's virtually wearing flares. The secret entrance blends seamlessly into the vintage world of junk: it's an old refrigerator which seems, quite convincingly, to be on sale as well.
Good Times at Davey Wayne's, 1611 North El Centro Avenue, Hollywood, Los Angeles

An entire thesis could be written on why Shanghai is so obsessed with speakeasies: they proliferate on a scale up there with LA or New York. But Shingo Gokan's Speak Low doesn't just rate as China's best bar: it's got a deceptively brilliant secret entrance, too. Enter through a bar supplies store and slide a bookcase to reveal the entrance. There's an extra-secret bar upstairs as well.
Speak Low, 579 Fuxing Middle Road, Former French Concession, Shanghai

Some might debate how secret Lisbon's Park roof terrace actually is - but this alpine wonderland, complete with plants, DJs, ski chalet style bar and some of the city's best views, is entered through the parking garage beneath it. Look for the parking lot sign, catch the lift up as high as it goes, then take the steps to the roof itself.
Park, 58 Calçada do Combro, Bairro Alto, Lisbon

Could it get more Brooklyn than a secret craft beer and pinball bar hidden behind a fully-functional laundromat (launderette)? We're not entirely sure, but Sunshine Laundromat, while far from America's only laundromat bar, certainly fits into its neighbourhood. You enter, naturally, by way of a secret door crafted from a pair of driers: the pinball machine collection is, we're told, world class.
Sunshine Laundromat, 860 Manhattan Ave, Brooklyn

As entrances to hidden bars go, a flower shop is one of the most attractive, and it's a technique used from Buenos Aires to Shanghai. Lurking behind this particular flower shop in Seoul is Alice, a wonderland version of an English manor house, where experimental drinks are served with surrealist verve that lives up to the flowers.
Alice, 47 Dosandaero 55-gil, Gangnam-gu, Seoul

Ah, a video store. Remember those? Well, even in La La Land, the home of the movie, they haven't quite survived - although this retro strip mall store takes you right back to the era of tape and cathode ray tubes. The bar, which also does film screenings, is concealed at the back, past the suggestive sign reading "Adults Only".
Adults Only, 7065 Sunset Boulevard, Hollywood, Los Angeles

We loved the old vending machine entrance at Shanghai's now-defunct Flask, but to see this particular hidden bar concept come all the way to Cambodia's Phnom Penh is pretty impressive. Head down the alley, look for the Coca-Cola dispenser (far from a common sight in Cambodia), and open to discover a classically styled secret bar.
BattBong, Langka Laneway, Street 51, Phnom Penh

No writeup of hidden bars would be complete without San Francisco's iconic Bourbon & Branch, which first served drinks in 1867 and spent the period 1923-1935 as a cigar shop with a speakeasy in the basement. Today, it's home to no fewer than five hidden bars, including the basement speakeasy, entered via a trapdoor from the main bar, the Library, accessed either by password or by a secret bookcase, and the noir-themed Wilson & Wilson detective agency.
Bourbon & Branch, 501 Jones Street, San Francisco

One classic way to front a speakeasy is with a late-night eatery - be it a noodle joint, a sandwich store, a taqueria, a pizzeria or even a pastrami store. But the cool-room door, complete with curtains, that leads down into the startling monochrome décor of Jules Basement in Mexico City stands out for its convincing camouflage.
Jules Basement, 93 Calle Julio Verne, Polanco, Mexico City

What hidden bars do best is create imaginary worlds. And at No Vacancy the magic starts even before you enter a hotel room with no apparent exit and the bed slides away to reveal the entrance. It continues inside, where authentic speakeasy style entertainment runs from big bands to tightrope walkers amid the glitz of a vanished era.
No Vacancy, 1727 North Hudson Avenue, Hollywood, Los Angeles

Injecting a dash of actual roleplay into the speakeasy theme is this vintage-style detective agency, straight out of a Raymond Chandler novel or a 1940s noir. Guests, in the most un-British of fashions, are expected to consult with a detective in his office to gain access into what's a reasonably traditional secret bar.
Evans & Peel Detective Agency, 310c Earls Court Road, London

If a wood-on-wood door were not sufficient to conceal this Chicago cocktail hotspot, then the mural painted on top of the timber certainly does. For all the raw finish on the outside, though, the vast basement space within is surprisingly opulent, with chandeliers, drapes, and a marble-topped bar.
The Violet Hour, 1520 North Damen Avenue, Chicago

One of a raft of secret bars to have opened in Leeds of late, a barber shop in a mall marks the concealed entrance to a classically styled speakeasy, complete with red leather booths and herringbone dancefloor. And, just like the speakeasies of yore, live bands play every single night.
The Domino Club, 7 Grand Arcade, Leeds

And five all-time classics of the genre

Where angels fear to tread...

The original bar-within-a-restaurant, and the granddaddy of the hidden bar craze, Angel's Share has been running for nigh-on a quarter of a century. Entered through an unmarked door within a Japanese restaurant, manned by mainly Japanese bartenders, it was this NYC icon that inspired Sasha Petraske to open Milk & Honey.
Angel's Share, 8 Stuyvesant Street, East Village, New York City, USA

The late, great Sasha Petraske founded the original Milk & Honey in New York, but this London offshoot, which dates all the way back to 2002, has a style that's all its own. An anonymous Soho doorway with zero signage provides a suitably secretive entrance for a classic next-gen speakeasy.
Milk & Honey, 61 Poland Street, London

As a veteran of Amsterdam's bar scene, Door 74 hasn't been secret for many years. Yet the entrance maintains an impressive degree of camouflage, feeling more like an abandoned shop than the entrance to the Netherlands' best-regarded bar. You'll need a reservation before you push the doorbell that gains you access.
Door 74, 74 Reguliersdwarsstraat, Rembrandtplein, Amsterdam

Rome's best bar is another classic speakeasy - and one that takes its bar rules seriously. A password is required even if you've reserved - and to get it you'll need to answer a question hidden on their home page. The door itself is pretty nondescript, although a small gold plaque does reveal the Jerry Thomas name.
The Jerry Thomas Project, 30 Vicolo Cellini, Rome

Accessed through a discreet door at the back of a tiny taqueria, Candelaria transformed Paris' bar scene when it opened in 2012. Deliberately rough around the edges, with a focus on agave spirits, it has a good-time vibe that other, more sombre, speakeasies often lack.
Candelaria, 52 Rue de Saintonge, Paris