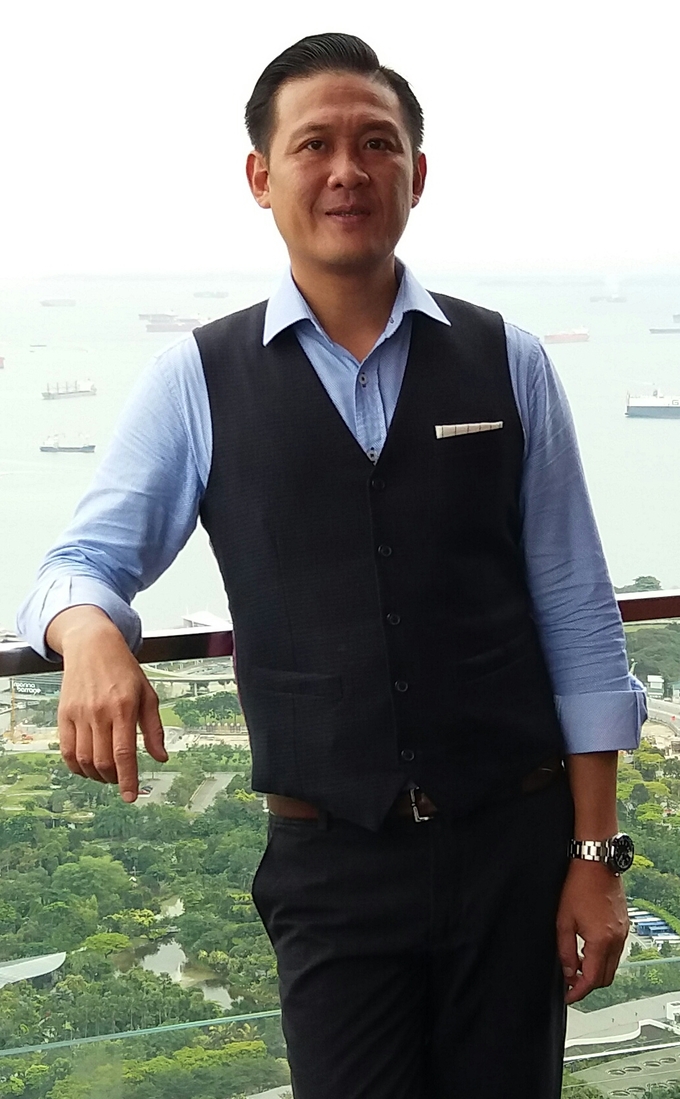 For Din Hassan, decades of bartending couldn’t prepare him for 2005 – the year when he’d welcome his first child into the world and at the same time, watch his city’s industry begin to truly blossom. For Cherry Heering, he was an obvious man to seek out. A gifted bartender. An acclaimed force in the industry. A featured talent in Singapore, a city breaking barriers for cocktails on a global scale.

His 2005 was in multiple ways about birth. It was both literal and figurative for him... the start of new life in his own home with the birth of his son and a time of great excitement in his city, where cocktails were concerned.

"It was the year my first child was born," he offers. "During that time, Singapore was also still new to cocktails. When you have a first kid," he says, warmly, "you need to work harder and sleep less, and you need to learn as much as you can."

The same could cheekily be said for bartending in a city where cocktails are seeing an explosion and guests are eager for education.

Today, Singapore is one of the world's leading stages for cocktail and bar creation, with incredible venues like New York's famed Employees Only opening there in 2017, the gin-focused Atlas landing at No. 15 on the 50 Best Bar awards held in London that same year and 28 Hong Kong receiving the spot at No. 25 in the world, as well.

Of the key players in Singapore over 12 years since 2005, Din Hassan has earned a coveted spot at the proverbial table of the city's star 'tenders. He cut his teeth through the '90s, working in the city's then-illustrious landscape for nightclubs, before modern craft mixology had even come into focus in America. In 2005, he left a post as operations manager at Cocco Latte to open Oyster Bar, followed quickly by joining Klee as the house mixologist. This would be one of the first menus utilizing Southeast Asia's incredible, fresh fruit, directly in drinks.

His career would take him on to work at White Rabbit, Bar Stories, Fullerton Bay Hotel, Lucha Loco, Bitters & Love, as well as Manor Bar & Cocktail Room, to name a few.

Experimental, playful, moored in local flavors - be it citrus or herbs esoteric to the western palate but common to a Chinese pharmacy - Hassan brings a pop of color and fresh approaches to drink design. For example, you'll find a classic Singapore Sling on his menu at Cé La Vie, to honor the city's history. However, he also offers a fun, frozen take on it for the hot days of summer, complementing the setting of the outdoor rooftop.

"Like a lady, when you have a nice dress, that's the color of your drink," he muses on how he creates new cocktails. "Then you garnish the drink¬¬ - put some makeup on - and the last zest with citrus is like the perfume. That's my philosophy of making drinks. At Cé La Vie we plan to focus more on local flavor in cocktails and to work closely with our chef and pastry chef, giving guests a more interactive cocktail," he says.

His drink is named "Two Out of Three Ain't Bad," and it begins with 20ml of Cherry Heering and 30ml of Tanqueray No. 10 gin. He adds five sprigs of fresh Asian Coriander leaf, a helping of fresh lemon juice, a little simple syrup and 20ml of egg white. He then shakes it, followed by a reverse dry shake. It's served in a coupe, garnished playfully with a Cé La Vie chocolate chip cookie. It's a first example of the pastry team's new crossover into the bar's cocktails.

"I am very lucky to still work in this industry after over 25 years," Din Hassan says. "meeting new friends and getting to travel around the world." Yet, home is home. He can easily wax poetic about all the great places that have risen in his city of Singapore over his own tenure.

"At Native, they only use Asian herbs and spirits that you can get in Singapore. They serve ants in one cocktail. Manhattan Bar, voted 7th best in the world, has a few barrel-aged in the venue, as well as great hospitality. Operation Dagger is in a secret location and all their drinks are distilled in-house, and Atlas has 1,000 gins from all over the world and still counting.

As for Cherry Heering, he says, it's not just about the brand or the grand competitions he's helped to host. "We've built a family with all the bartenders involved from around the world." 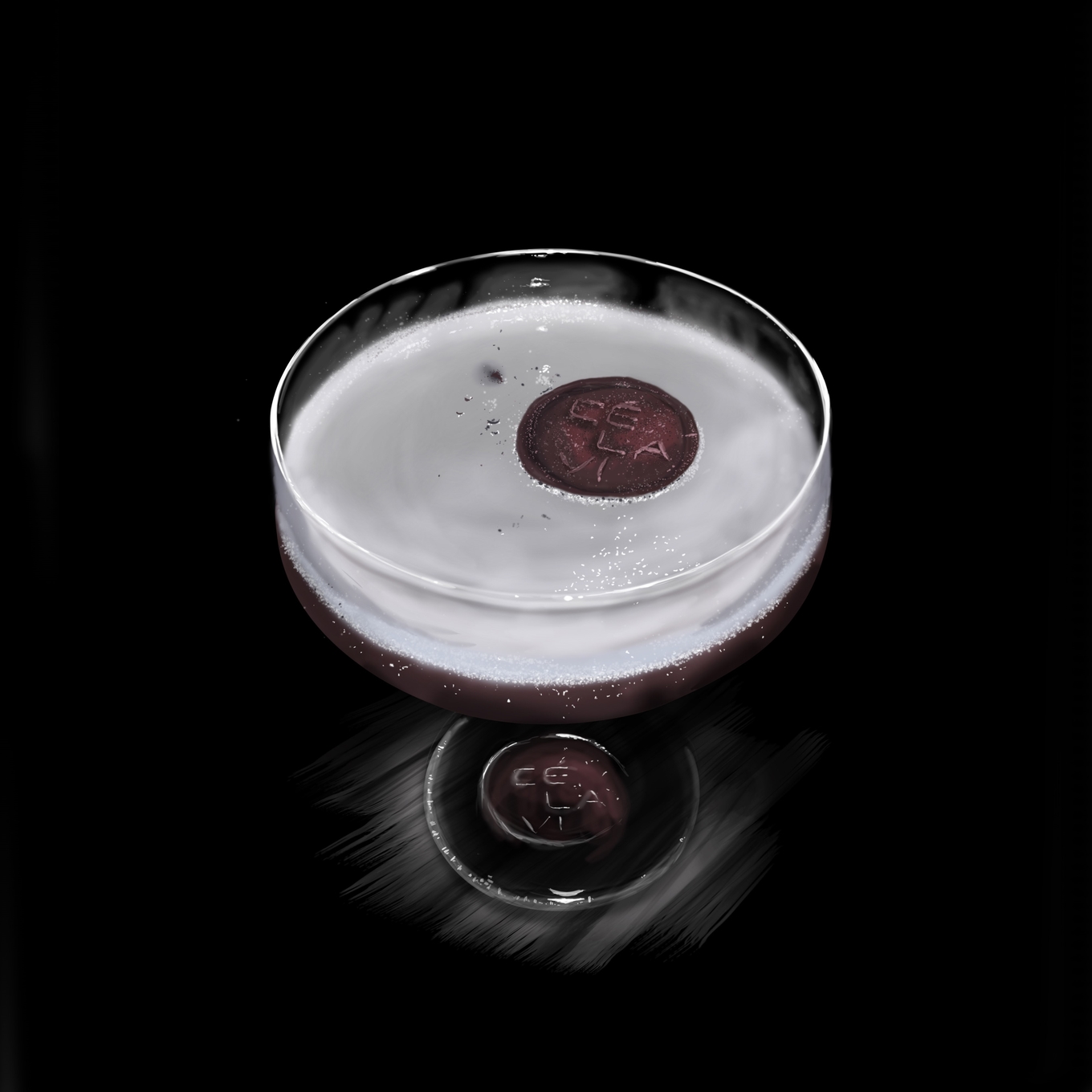 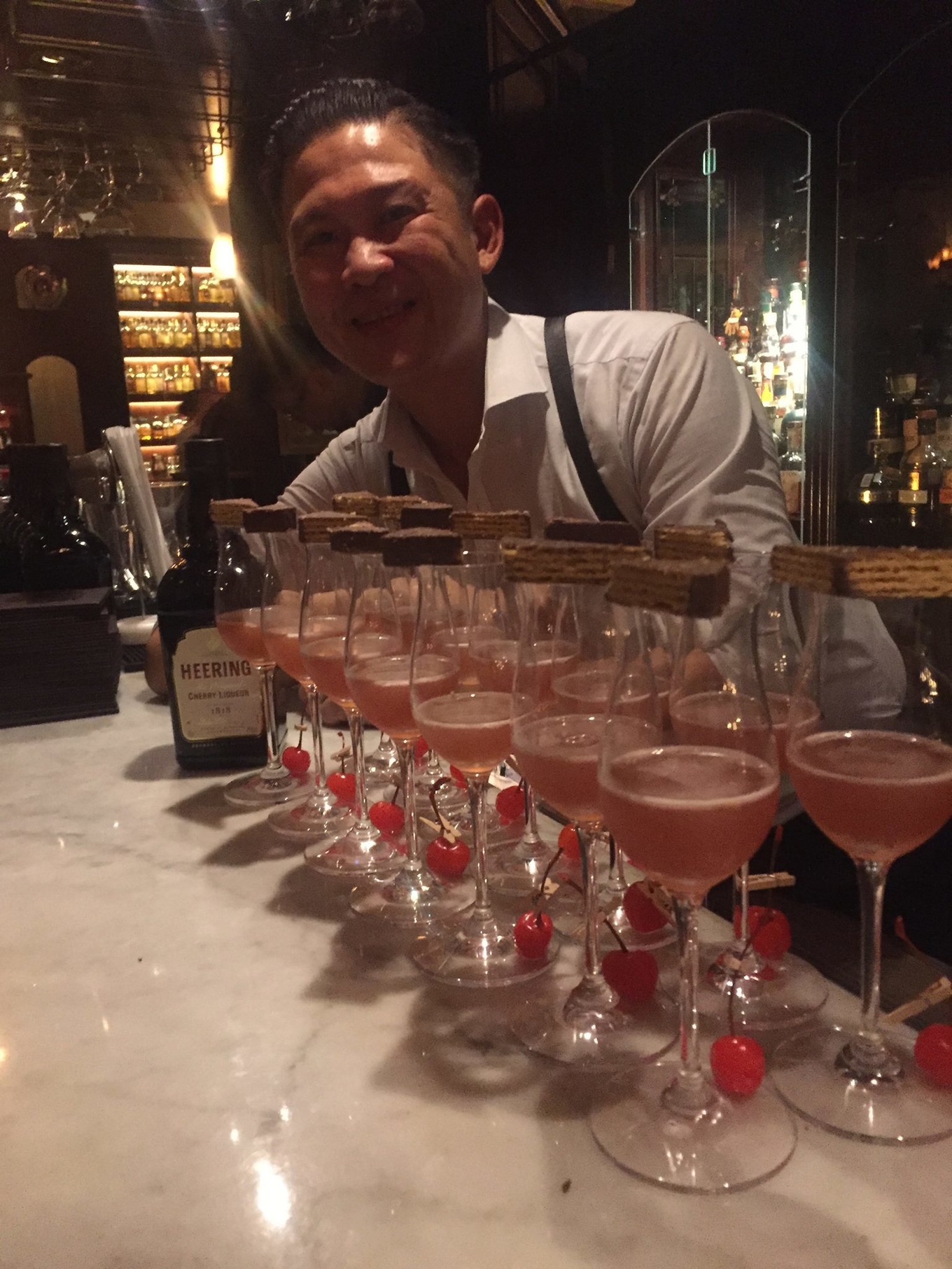 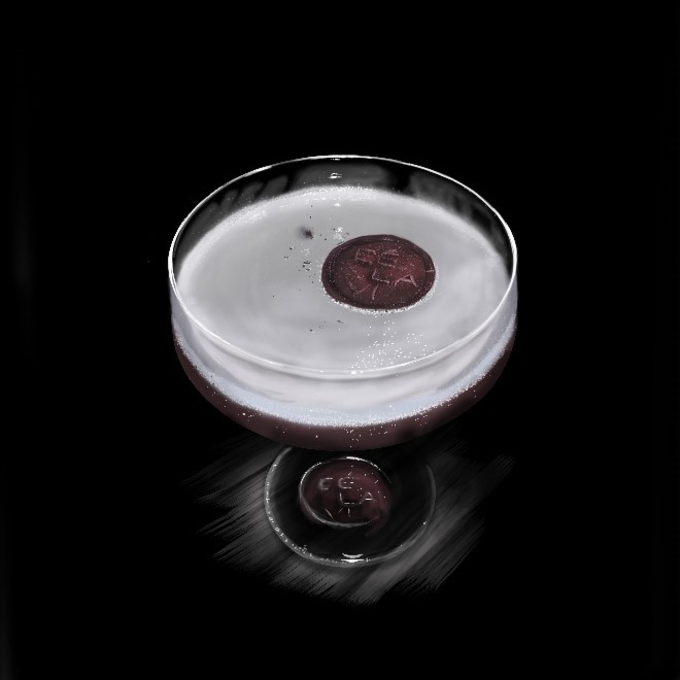