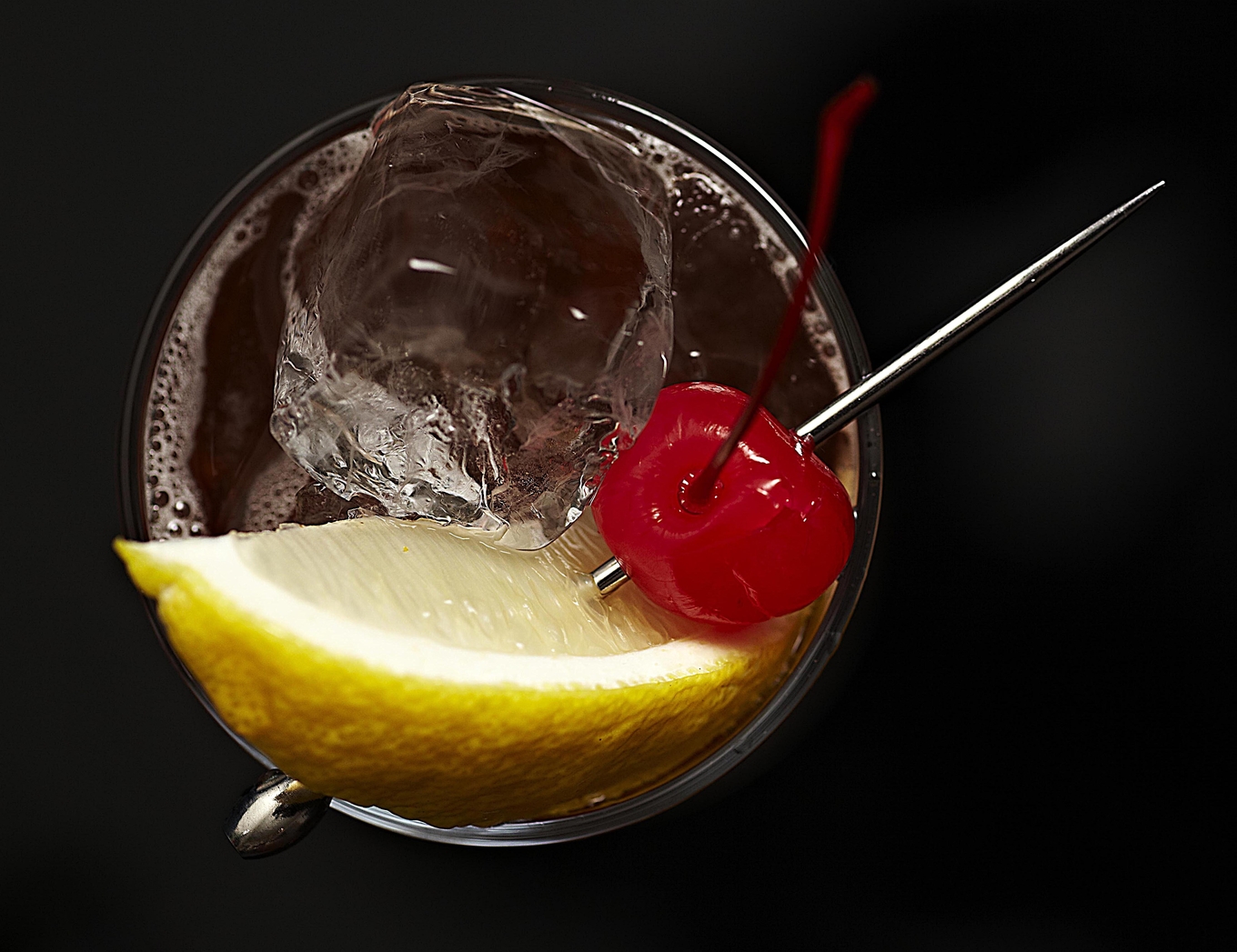 Convention has it that the Singapore Sling was created sometime between 1899 and 1915 by Chinese-born Ngiam Tong Boon at the Long Bar in Raffles Hotel, Singapore.

Raffles Hotel is named after the colonial founder of Singapore, Sir Stamford Raffles, and was the Near East's ex-pat central. As Charles H. Baker Jr. wrote in his 1939 Gentleman's Companion, "Just looking around the terrace porch we've seen Frank Buck, the Sultan of Johor, Aimee Semple McPherson, Somerset Maugham, Dick Halliburton, Doug Fairbanks, Bob Ripley, Ruth Elder and Walker Camp - not that this is any wonder." Raffles still sticks out of modern-day Singapore like a vast, colonial Christmas cake. 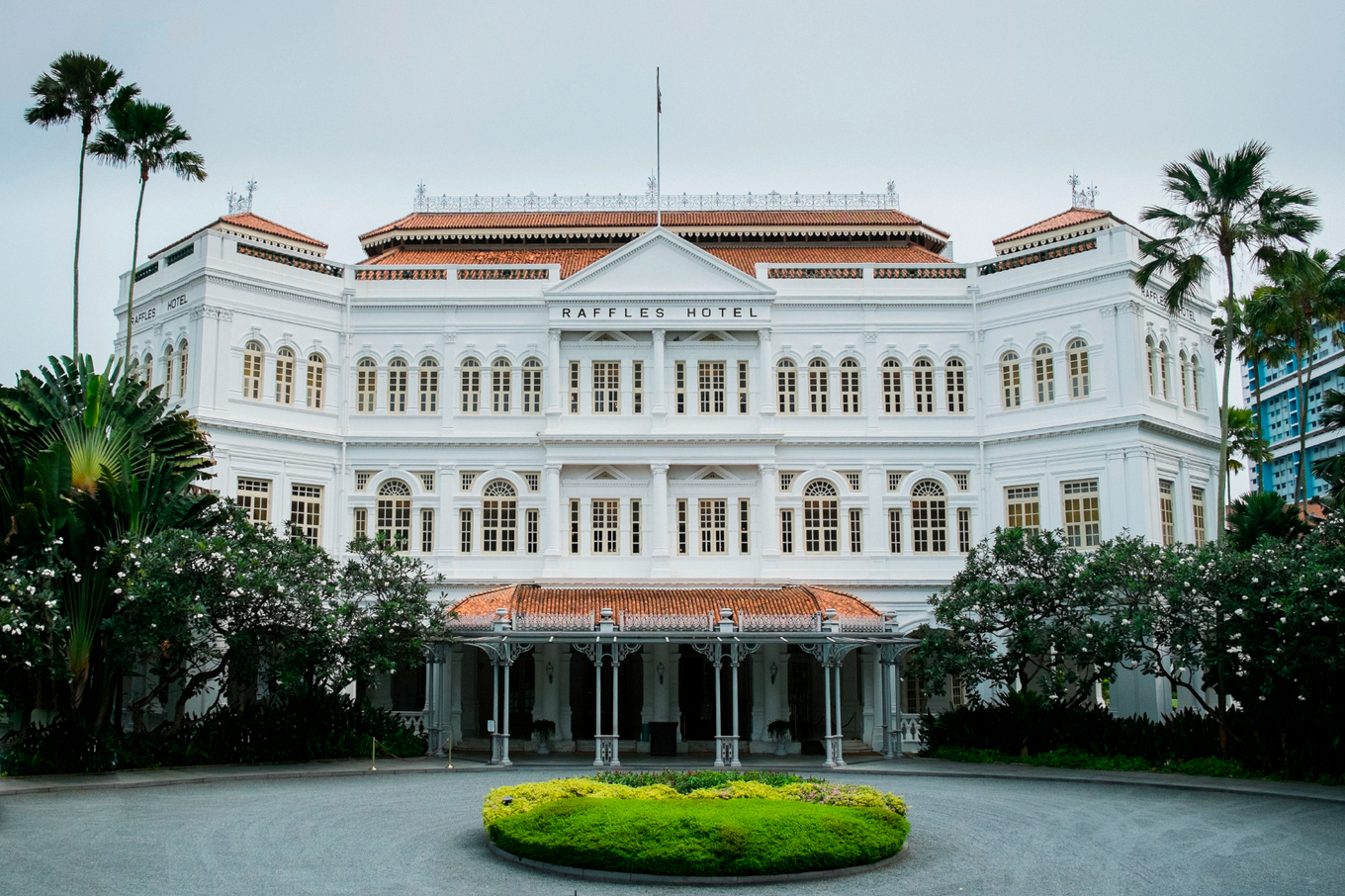 The weight of evidence confirms it was Chinese-born Ngiam Tong Boon who created the Gin Sling we now recognize as a Singapore Sling while working at the Long Bar at Raffles Hotel, so this dates the drink's invention sometime between 1899, when Boon started work at the hotel after its expansion, and 1915, when Boon died after leaving the hotel to travel back to Hainan, China. 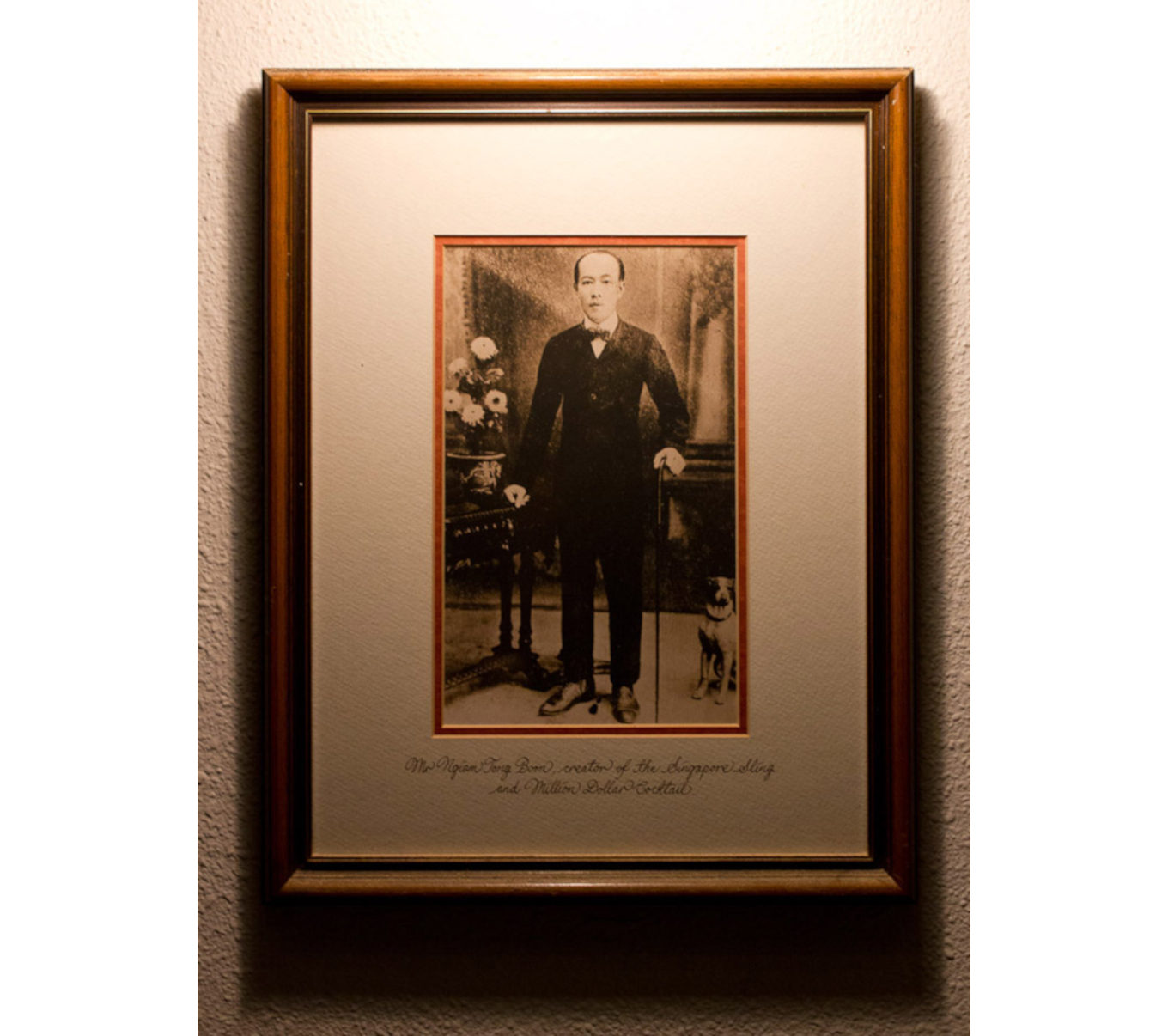 So there is little controversy as to who created the Singapore Sling, where he created it and (roughly) when, but there is much debate over the original name and ingredients.

Early bar books include recipes for both Singapore Slings and Straits Slings - Singapore was part of the British cluster of colonies which in 1836 was grouped with Penang and Malacca to form the Straits Settlements and it seems certain that Boon's drink was similarly named the 'Straits Sling'. In the Long Bar itself people probably simply ordered a 'Gin Sling' and were served Boon's 'house' version of the drink.

The name appears to have changed sometime between 1922, when Robert Vermeire describes the Straits Sling as a "well-known Singapore drink" in his Cocktails and How to Mix Them, and the early 1930s.

In his 1930 The Savoy Cocktail Book, Harry Craddock includes both the Singapore Sling and Straits Sling, the latter being closer to what we recognise today as a Singapore Sling.

SINGAPORE SLING.
The Juice of ¼ Lemon.
¼ Dry Gin.
½ Cherry Brandy.
Shake well and strain into medium size glass, and fill with soda water. Add 1 lump ice.STRAIGHTS SLING.
(6 people)
Place in a shaker 4 glasses of Gin, 1 glass of Bénédictine,1 glass of Cherry Brandy, the Juice of 2 Lemons, a teaspoon of Angostura Bitters, and one of Orange Bitters.
Shake sufficiently, and serve in large glasses, filled up with Soda water."

Noel Coward, who first visited Raffles in 1930, records drinking simply "gin slings" and it appears the drink most widely known as a Singapore Sling was originally a classic gin sling with cherry brandy and optional Bénédictine D.O.M. liqueur.

The operators of the modern-day Raffles Hotel claim the original recipe is as follows and this is printed on the hotel's menus and hand-out cards.

The hotel was occupied by invading Japanese in 1942 and Allied Forces used it as a transit camp for prisoners of war in 1945, so it is not surprising that no record of Boon's original recipe survives. Indeed, the hotel's only source for the recipe they tout as being the original is a note scrawled by a visitor to the bar in 1936 after asking one of the bartenders how to make the drink.

If this was the bar's standard or original spec is far from certain. It's also worth mentioning that a soda called Holy Joe's Singapore Sling was sold in the USA around the same time.

It was almost 40 years after the inquisitive drinker recorded this recipe that manager Roberto Pregarz took over as GM of Raffles and set about re-launching what had become a tired hotel as a luxurious landmark with the Singapore Sling being part of a successful PR campaign. Sceptics to the authenticity of this recipe, particularly the inclusion of pineapple juice and grenadine, argue that pink, fruity Tiki-style drinks were fashionable at the time of the 1970s re-launch and these ingredients could have been added to Boon's original recipe to make the Singapore Sling better suited to the tastes of the day. Further, while pineapple grows in Singapore, oranges were imported so pineapple could have been added to increase the drink's profitability.

The hotel counters such claims with a statement they attained from Ngiam Dee Saun, Boon's nephew, confirming that the Tiki-style recipe was indeed his uncle's 60-year-old recipe. He happened to work at Raffles at the time so arguably had a vested interest.

Pink Gin Slings could have been ubiquitous in early 20th century Singapore and Boon may have created his own version by simply adding grenadine and pineapple juice, the latter also appears in his (or said to be his) Million Dollar Cocktail. However, the equal-parts recipe recorded by globetrotting Charles H. Baker in his 1939 The Gentleman's Companion omits both grenadine and pineapple juice.

"The original formula is 1/3 each of dry gin, cherry brandy and Bénédictine; shake it for a moment, or stir it in a bar glass, with 2 fairly large lumps of ice to chill. Turn into a small 10 oz highball glass with one lump of ice left in and fill up to individual taste with chilled club soda. Garnish with the spiral peel of 1 green lime. In other ports in the Orient drinkers often use C & C ginger ale instead of soda, or even stone bottle ginger beer."

While contemporary sources are clear that it was cherry brandy that distinguishes the Singapore Sling from other kinds of gin sling, a great debate rages over the type of cherry brandy used. Was it a cherry 'brandy' liqueur and if so was Cherry Heering the brand used, as stated by Raffles. Or was it actually a cherry eau-de-vie (kirschwasser)?

This conjecture is partly based on Robert Vermeire's 1922 recipe for Straits Sling which calls for "dry cherry brandy", and in his 1948 The Fine Art of Mixing Drinks, David A. Embury calls for "Cherry Brandy (kirschwasser)". (Neither recipe features either grenadine or pineapple juice.) However, in his 2015 Updated and Revised Punch!, David Wondrich asserts that it was either Bols or Cherry Herring liqueur as they are the only cherry brandies that turn up in local liquor advertisements at the time.

Straits Sling
This well-known Singapore drink, thoroughly iced and shaken, contains:
2 dashes of Orange Bitters
2 dashes of Angostura Bitters
The juice of half a lemon
1/8 gill of Bénédictine
1/8 gill of Dry Cherry Brandy
1/2 gill of Gin
Pour into a tumbler and fill up with cold Soda Water.

Robert Vermeire, Cocktails and How to Mix Them, 1922

Singapore Gin Sling
Of all the recipes published for this drink, I have never seen any two that were alike. Essentially it is simply a Gin Sling with the addition of cherry brandy. The following is typical of the various recipes:
1 teaspoonful Sugar Syrup
Juice of 1/4 large Lemon or 1/2 large Lime
1 pony Cherry Brandy (Kirsch)
1 1/2 jiggers Gin
1 dash Angostura
Shake and strain into 8-ounce Highball glass or use 10-ounce glass and leave 1 large ice cube in the glass. Fill glass with charged water. Some recipes call for the addition of a pony of Benedictine. Also, some call for ginger ale in place of the charged water. A slice of lemon peel should be twisted over and dropped into the drink.

Almost all historic and modern Singapore Sling and Straits Sling recipes call for Bénédictine liqueur and it's worth mentioning they are referring to Bénédictine D.O.M. rather than the Bénédictine & Brandy (B&B) version now popular in the U.S. which was not launched until 1938.

For years it was hard to take any reference by Raffles Hotel to the original Singapore Sling recipe seriously as the hotel's famous Long Bar made its Singapore Slings using a premix, also sold in packets in its gift shop. Incidentally, the Long Bar itself was relocated from the lobby to the first floor of the then newly built shopping arcade in 1991. Thankfully, Richard Gillam, a British bartender living in Singapore was instrumental in Raffles abandoning the pre-mix in favour of freshly made Singapore Slings. So, since 2012, the hotel has made Singapore Slings according to the recipe it describes as the original. However, they are still fruity, sweet and best avoided. Sadly, today's Long Bar is something of a tourist trap rather than a bar with real substance.