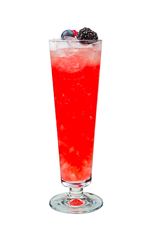 On this day in 1984, while testing the microphone prior to his weekly scheduled radio address, President Ronald Reagan joked, "My fellow Americans, I am pleased to tell you today that I've signed legislation that will outlaw Russia forever. We begin bombing in five minutes."

The off-the-cuff remark came during a period of heightened tensions between the USA and Russia, and although said in jest Regan's policy decisions displayed a tough, anti-communist rhetoric. Whereas previous presidents Nixon, Ford and Carter had strived to foster good relations with Russia, Regan increased defence spending.

The Russians responded by similarly increasing theirs and some analysts say that this arms race directly led to the collapse of the Russian economy, which in turn brought about the dissolution of the Soviet Union.

So today we are drinking to a Presidential gaff and the independence of the former Soviet republics with a Russian Spring Punch, a tall suitably summery cocktail by the legendary Dick Bradsell.

On this day in 1934, the first civilian prisoners classified "most dangerous" arrived at the new high-security penitentiary on Alcatraz Island, the 22-acre rocky outcrop that lies 1½ miles from the city of San Francisco in San Francisco Bay.

The convicts joined a few dozen military detainees that remained from when the island was used as a military prison - something which dates back to 1868 when it was not just military criminals but also rebellious Indian scouts that were incarcerated there.

Alcatraz was fortified to hold the most dangerous prisoners in the U.S. penal system and the infamous mobster, Al Capone was moved to the island within days of its opening in August 1934, with George "Machine Gun" Kelly sent there the following month. No prisoner is known to have escaped "The Rock" without either being caught immediately after arrival on the mainland, or perishing in the treacherous waters of San Francisco Bay.

In 1963, U.S. Attorney General Robert F. Kennedy ordered Alcatraz closed due to its maintenance costs. Over its 29-years as a penitentiary, Alcatraz housed more than 1,500 convicts. In 1972, Alcatraz was opened to the public and more than one million tourists visit the island and the former prison annually.

During our many visits we've been more preoccupied with San Francisco's vibrant bar scene and the nearby distilleries, breweries and wineries than we have its tourist attractions. However, we'll be sure to visit the Rock the next time we're there and in the meantime we'll toast The Rock with a Alcatraz Cocktail.

The world was meant to end on 21 December 2012 - at least according to the Mayan Long Count calendar, which began this day in 3114 BC.

Our favourite contribution from that mysterious Central American civilisation, however, is not the calendar, but agave, the plant we have to thank for tequila. Mayans believed that a god named Two Rabbits gave up his life so humans could drink fermented agave. That was rather kind of Two Rabbits, and today is the perfect day to toast him with a Mayan Whore, a seductive tequila blend enriched with both coffee and pineapple.

Peter Cushing died this day in 1994

We will crush the rebellion with one swift stroke! As Governor Tarkin in the original Star Wars films, Peter Cushing is instantly recognisable - yet he's best remembered as a man who defined classic horror.

Cushing made his name in the Hammer Horror films, playing characters like Baron Frankenstein and Van Helsing over, and over, and over again. In contrast, Cushing's personal life was kind and gentle, a committed vegetarian, a birdwatcher, and a man who mourned his wife for over 20 years.

In honour of a great British treasure, we're drinking the suitably bloodthirsty La Sang, a splendidly adult alternative to those godawful "lemonade"-laced Sangrias.