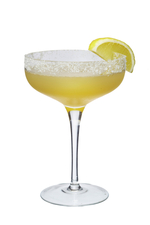 It was on this day back in 1988 that The Daily Telegraph reported that contractors working on Platform 10 at London's King's Cross station had unearthed the skeleton of the warrior Queen Boudicca. Was it really hers? Who knows.

Historians have estimated that Boudicca died around 60AD, when it's thought that she poisoned herself to avoid being captured by the Romans. If we look at the rest of Boudicca's life, then it's a distinct possibility - she wasn't one to back down easily. The really interesting part of the story though is the whereabouts of her death - several people have claimed to have found Boudicca's burial site, but all in different locations...

Regardless of how much truth there is in the story that like so many others, Boudicca was patiently waiting at Platform 10 at King's Cross, we quite like the yarn...and moreover it's a good excuse to celebrate the Celtic Queen by mixing up a Celtic Margarita.

It's also the anniversary of the great stock exchange fraud

On this day in 1814, a chap named Colonel du Bourg appeared at the Ship Inn in Dover, bearing news that all England wanted to hear. Napoleon was dead! Allied armies were on their way to Paris!

In London, three French officers, dressed in the uniform of the Bourbons, the French ruling family before Napoleon, announced that the old monarchy would be restored. Stock Exchange prices soared at the news - only to crash again later that day when the government announced that Napoleon was still very much alive.

Stock Exchange investigators found that over £1.1million of government stock - an insane amount of money in those days - had been bought the week before and sold at their peak on the day of the fraud. Eight men later served long sentences for the fraud, including the fake Colonel Bourg.

We are commemorating this event, which shows that finance and fraud have gone hand in hand for many years and that bad information could go viral long before the internet, with an aptly named Bourbon Blush. Do join us.

It's also the anniversary of the "I have sinned" speech

Remember the hypocritical, money-grabbing televangelist Patrick Swayze plays in Donnie Darko? Yes? Then you might even remember Jimmy Swaggart, one of an impressive range of moneygrabbing Pentecostal preachers to be stung for major league hypocrisy.

"The Lord has been good to me," Swaggart used to explain, pointing to his private jet, three homes, multiple cars and $150 million annual income, and he received his first message from God aged only eight.

... comment(s) for Boudicca's grave was found this day