It's the anniversary of The Great Los Angeles Smog 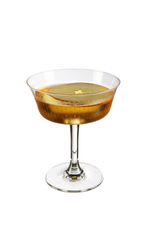 On this day in 1943, a few months after Pearl Harbour, Angelenos woke up believing they were under chemical attack: eyes were stinging, noses were running, and Los Angeles' famously pure air was full of thick, choking smog that obscured the iconic skyline. And so began a journey of discovery.

The city wasn't under attack. At first, a rubber plant was blamed. Yet, even after it was shut down, the smog returned. Amazingly, it would take almost a decade before folk realised that cars were to blame, and another twenty before pollution standards came in for automobiles. And today, it's worth noticing that the environmental damage that seems obvious in hindsight wasn't necessarily obvious at the time. We are lifting our spirits with an Angel Face, discovered in Harry Craddock's Savoy Cocktail Book.

María Eva Duarte de Perón died on this day in 1952, aged 33, leaving in her wake a whole wealth of movies, musicals, Madonna songs, not to mention poems and paintings.

Born poor and illegitimate in conservative Argentina, Eva rose from B-movie acting and radio to become First Lady of Argentina - and almost became Vice-President, too. Known nationwide by the Spanish shortening Evita, she may have been behind women's acquisition of the right to vote in Argentina, and established a personal foundation to reduce poverty.

The Vatican has received several requests to make her into a saint. And, like Communist leaders, her body was mummified after her death and preserved in glycerine. She was buried, later exhumed, and moved several times, also passing a spell in Juan's dining room. Her remains are now back in Buenos Aires in a very secure tomb, so nervous are the authorities that it will be stolen by adoring fans.

Besides the movies and the musical, Evita inspired at least one cocktail. Why don't you give it a try?

... comment(s) for It's the anniversary of The Great Los Angeles Smog