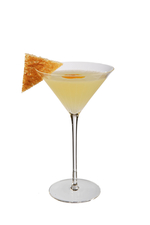 Oh, those crazy Finns! In Finland, today is Sleepy Head Day, when the last person still in bed in a house is awoken with a shock of cold water - either a splash from a bucket, or an involuntary dip into one of the country's many lakes and rivers.

In the town of Naantali, one local celebrity will begin the day by being carried, still in nightclothes, to the sea and then dunked. And it's all because of religion. Bizarrely, Sleepy Head Day dates back to a group of Christian saints in Ephesus, who retired to a cave to escape Roman persecution and kipped there for a cool two centuries.

We can think of many more pleasant ways to start the day than a drenching in cold water, one being with a Breakfast Martini, an eminently palatable blend of marmalade, gin and orange.

Such a spirituous celebration would normally take top billing on this page but this celebratory day is surpassed by International Scotch Day (10th February) and World Whisky Day which was started by Diageo and anoyingly changes date each year to land on a Saturday in mid-May.

However, you can't have too many excuses to appreciate and enjoy Scotch whisky, so we'll be celebrating with a Scotch Sour. And we've also 20 best Scotch whisky cocktails to celebrate with.

It's the anniversary of the end of the Korean War

Poor Korea. Annexed by Japan in 1910, divided up between the USSR and the USA in 1945, the north is now home to one of the world's most mentalist regimes, while the south is a flourishing first-world economy.

On this day in 1953, the last war between the two Koreas ended. North Korea, of course, had started it, although the South, led by a man whose stated aim was to reunite the two halves under his leadership, was not entirely guiltless. UN forces, including 100,000 British servicemen and women, stepped in to protect the south, but it would take almost two years for the feuding sides to agree on terms of the armistice.

North Koreans will be celebrating today with a totalitarian whirlwind of parades, sing songs and brainwashing. South Koreans won't be. Us? We're enjoying an Southside Rickey but remembering the plight of the repressed in the north.