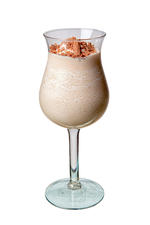 Frothy, creamy, sweet and indulgent. The chocolate milkshake is indeed a marvellous thing. And today we celebrate this yummy treat as it's National Chocolate Milkshake Day.

In 1922, a Chicago Walgreens employee, Ivar 'Pop' Coulson, was inspired to add two scoops of ice cream to an old-fashioned chocolate malted milk, and in doing so, invented the chocolate milkshake that we know and love today.

Prior to this, a milkshake was actually an alcoholic concoction of cream, eggs and whiskey - an eggnog of sorts - served as a tonic by pharmacists. But after Coulson's discovery, and the invention of the electric blender, this more wholesome version of the milkshake became a hit in burger joints and diners across the United States.

A whimsical reminder of our youthful innocence and a symbol of popular culture in the States, today we celebrate the chocolate milkshake with our own (somewhat boozier) version in the form of a Death by Chocolate. And if its a boozy milkshake you're after, then perhaps try a Mad Monk Milkshake.

On this day in 1933, a physicist named Leo Szilard was standing at the traffic lights where Russell Square joins Southampton Row in London. The lights turned green, he stepped off the pavement and... Szilard realised, in an instant, that the atom could be split, releasing unquantifiable amounts of energy. And he kept his discovery to himself.

Why? He had just fled Germany - as a Jew, he could already see what Hitler had in mind for him - and his number one priority was that Hitler never achieved the atom bomb. In 1939, though, as World War II began, Szilard prevailed on his friend and colleague Einstein to write a letter he had drafted, asking the US Government to begin research. Towards the end of the war, he warned of the dangers of a long-term global arms race.

So, if you're wandering past Russell Square today, stop at the lights and take a look. Or just toast that terrifying and brilliant lightning strike of inspiration with one of our own creations, a Smokestack Lightning.

Today in 1940, Marcel Ravidat, an 18-year-old mechanic from the village of Montignac in France, stumbled on one of the great wonders of the world: the Lascaux Caves, an ancient human habitation lined with wonderfully lifelike paintings of charging stags, galloping horses and leaping bulls.

Nobody knows whether they were sympathetic magic or an early form of entertainment - what is certain is that they had survived for around 17,000 years. In honour of those ancient French artists, and the chap who discovered them, we are drinking a French Cocktail, a cognac-based take on the 1990s French Martini.