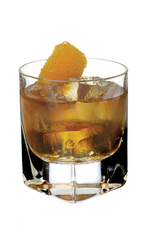 More than 1500 people would die, either sinking with the ship, or freezing to death in the icy waters around her. Of all the tales of heroism from that night - John Jacob Astor, who sent his pregnant young wife to the lifeboats but stayed behind himself, to the Captain who went down with his ship, to John Edward Hart, who went down into the depths of the ship to rescue Third Class passengers, it's the band that stands out. To prevent panic among the hundreds facing certain death, and a potentially lethal storming of the lifeboats, they stood on the deck and played calming, jaunty tunes. Their bravery and composure, despite knowing they would go down with the ship, most likely saved hundreds of lives.

What they played is disputed, with sources torn between Autumn and Nearer, My God, To Thee, but one crew member recalls them playing Autumn, so we are raising a glass to them and other brave folk, with an Autumn Leaves. We are also remembering the iceberg that started it all with an Iced Sake Martini, which includes icewine made from frozen grapes.

Today is the Day Of The Sun

Today the hardworking folk of the Democratic People's Republic of Korea get a rare break from the battle against US supremacism, on a public holiday to celebrate the birthday of their Great Leader, AKA the Day of the Sun.

Kim Il-Sung was the grandfather of the current Great Leader, Kim Jong-Un. Still, lord knows, there's plenty to celebrate in a country where most live way below the global poverty line, all exist under constant supervision and many survive in prison camps of extreme brutality.

In the hope that the Kim dynasty will ultimately be replaced with something a bit saner, we're drinking a Sundowner.