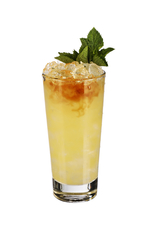 On this day in 1813, a mysterious, thick fog smelling of coal tar blanketed London, cutting visibility so low that folk couldn't see across the street, the Prince Regent's travel plans were disrupted, and the Birmingham mail coach couldn't run.

It wouldn't clear until the New Year, and puzzled pundits around England. The cause? Well - d'oh! - the new-fangled factories. The Industrial Revolution had just begun to hit, and manufacturers, unhindered by any concept of pollution or emissions, were filling the air with chemical fumes, coal smoke and particle loads of the sort that would spark prosecution today.

As far as we know, however, no one joined the dots, just accepting it as one piece of freak weather, rather than the result of human activity. It would be many years before folk began to take action on the environment.

In honour of environmentalists everywhere, and our clearer skies today, we're enjoying a Fog Cutter, a well-balanced Trader Vic creation loaded with four different spirits to help cut through even fog.

Peter Pan first appeared in a London theater on this very day back in 1904. J M Barrie's story actually started off as a play, and later turned into a novel.

If it's been a while since you read the story of the boy who never grew up, then why not get reacquainted with it today. If you can get your hands on a copy, then mix yourself a Peter Pan Martini, curl up by the fire, and be transported to Neverland - a world inhabited by the lost boys, Tinkerbell, Tiger Lilly and the notorious Captain Hook....

Star Wars came to the UK

A long time ago in a galaxy far, far away, when Mark Hamill and Harrison Ford were equally unknown, folk queued outside the cinemas of London's West End since before dawn, and scalpers sold tickets for a whole £30...

Star Wars was coming to town. And the Star Wars fever that sparked a thousand godawful conventions and an entire Jedi religion was born this day in 1977.

Creator George Lucas, of course, sold the franchise, and with it, LucasFilm, to Disney, for a cool $4bn, while staying on as a consultant. And, Lord love him, he donated most of it to charity. So the franchise has been revived, we are looking forward to the next film and drinking a Starry Night.