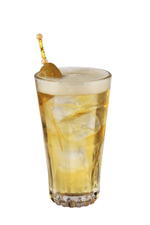 There's nothing quite like an ice-cold beer on a hot day. Or any day for that matter. So let 27th October, or National American Beer Day, be your perfect excuse to try a beer from one of over 7,000 breweries creating the definitive thirst-quencher in America.

Despite the 'hiccup' that was Prohibition in the 1920s, Americans have been obsessed with beer since colonists in Virginia started brewing it in the 1500s. Nowadays, the American giants of the beer industry sit alongside smaller craft beer producers, so whether you're a Bud drinker, or prefer something a little more artisanal, there's always an amber nectar with your name on it.

Americans have such a love of beer that there are hundreds of different slang names for it. So next time you're ordering a pint, why not ask for a 'brewskie', and 'cold one', a 'neck oil' or a 'sherbet' and see what turns up? And if its a IPA, or even APA, try adding a slug of liqueur to make a IPAlicus.

The New York City Subway opened this day in 1904 when at 2:35 pm Mayor George McClellan took the controls on the inaugural journey. It is one of the world's oldest public transit systems, and like most things in America, it's big, very big.

The New York City Subway is:

The system operates 24 hours a day and despite being called "Subway", 40% of the track is above rather than underground.

We are fumbling for our Metro card to use as a coaster and toasting the largest, longest and one of the busiest rapid transit systems in the world with a New York Sour, or even a Zubway.

It's Independence Day in Saint Vincent and The Grenadines

Today is party time in Saint Vincent and the Grenadines, one of the world's smaller - though by no means its smallest - nation. The West Indian islands will be celebrating their independence, gained from the UK in 1979, with steelpan, calypso, soca and reggae - and, obviously, rum. Upscale Mustique will be celebrating in a slightly classier vein.

The islands aren't called the Grenadines after pomegranates - the original folk who sighted them called them Los Pajoros, or "the birds". But the combination of rum and grenadine is one that continues to appeal. So we are taking the opportunity to enjoy a vintage upgrade to the classic Bacardi Cocktail, discovered in Harry Craddock's 1930 The Savoy Cocktail Book. If you haven't tried the Bacardi Special, we recommend you use, as always, a good quality pomegranate syrup, or even make your own. You'll find the hit of gin adds a botanical edge and, when it works, the drink really works.