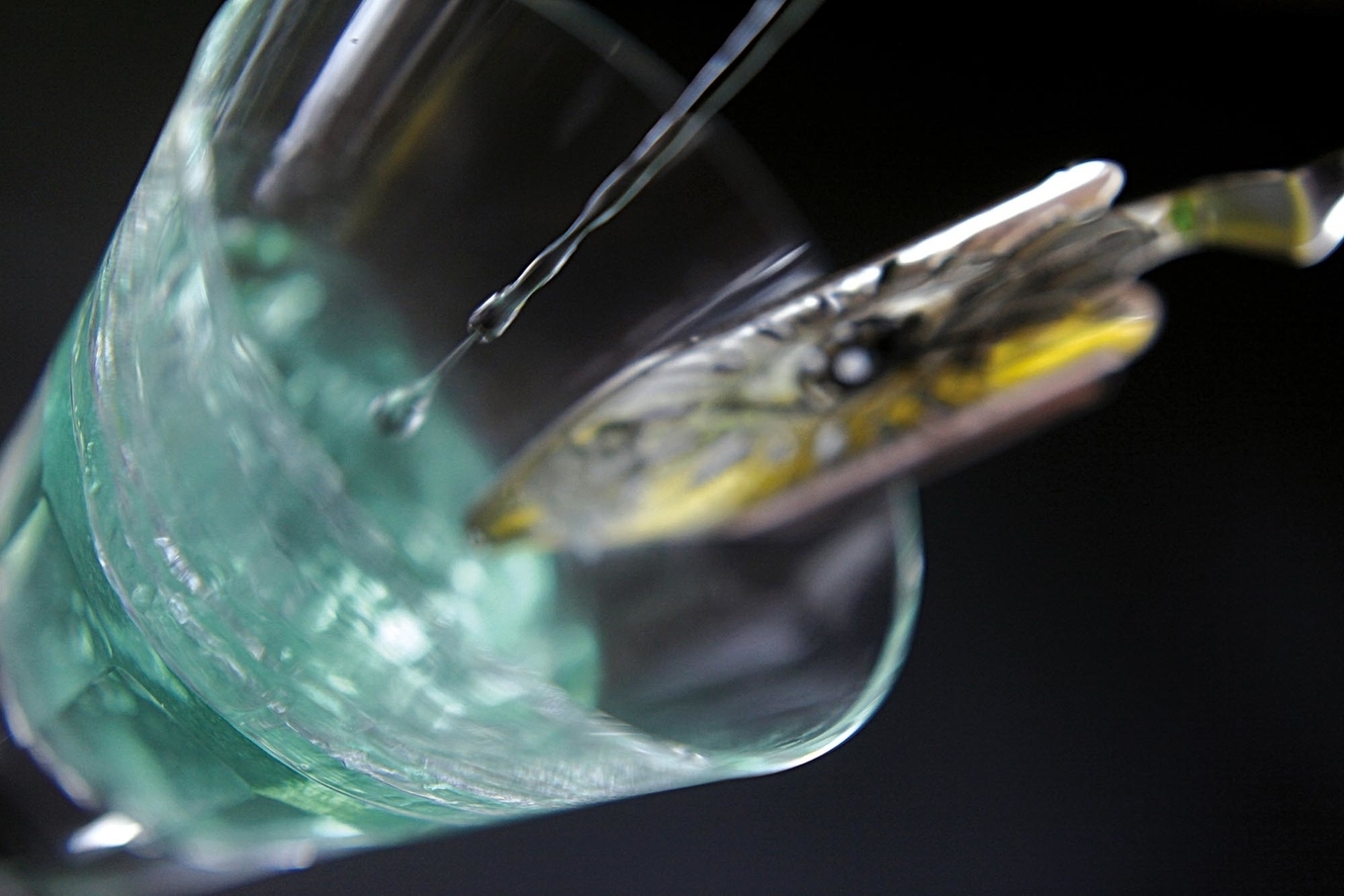 Absinthe was reintroduced to the UK after some 80 lost years on Tuesday 8th December 1998. Such a sensation was it, that the term absinthe craze only hints at how popular the green fairy quickly became. Absinthe had a reputation to rival crack cocaine and its reintroduction made for shocking headlines and was discussed in parliament.

The brand to breach the presumed ban was Hill's Absinth (without an 'e') and its launch party in one of the upstairs rooms of London's Groucho Club was memorable with the legendary bartender, Dick Bradsell serving Bohemian Sours in martini glasses. Journalists from the Daily Telegraph and Evening Standard were amongst those invited to the launch but unusually for hacks, there was something of a reluctance to try this purportedly 'dangerous' spirit - after all, it was still banned in most other developed countries.

I also attended the party but was a tad less reluctant to partake with Dick keen to find anybody prepared to demonstrate to the assembled press that absinthe cocktails were fit for human consumption. Ever tried an absinthe lay-back? I did that night, along with a shot Dick called the Hammer of the Gods.

I chatted with George Rowley (the man behind the launch) and discovered that he didn't have distribution in place. The next morning, reeling with the effects of my first absinthe hangover, I hooked George up with John Coe of Coe Vintners who then took the bulk of the first shipment and becoming the first UK distributor of absinthe since the French 1915 ban.

That day the Daily Telegraph published a front-page piece on the launch which caught the attention of Jeremy Paxman as he reviewed that day's newspapers on BBC2's Newsnight at the end of the programme. The following morning George received a call from the BBC asking if he could demonstrate the Absinth-burning ritual on Newsnight that evening.

That serve, which involved burning sugar on a spoon, helped reinforce absinthe's drug-like reputation and this led George to set up a program to limit the release of his absinthe only to carefully selected bars who had received appropriate staff training, training which included limiting the number of absinthe cocktails served to anyone drinker. 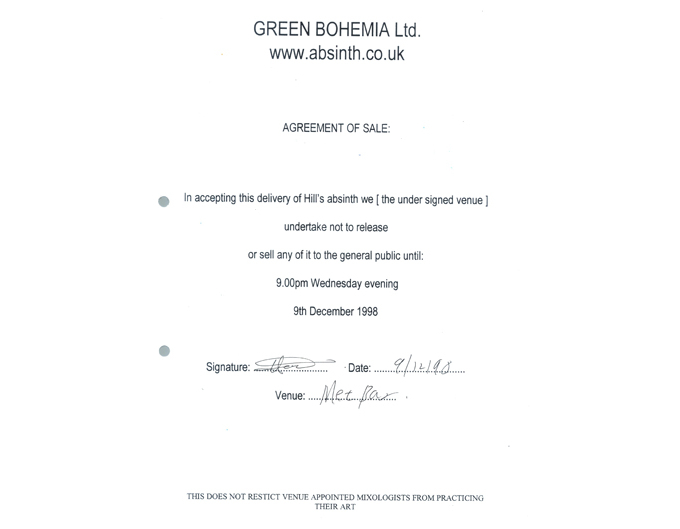 Contract signed by The Met Bar, then London's most fashionable bar

Despite his responsible approach, the nanny state reaction that followed was predictable. In Parliament on the day before the launch, George Howarth, then-Secretary of State for the Home Department, replied a question regarding the availability of narcotics and the sale of absinthe, stating, "Absinthe does not come within the scope either of domestic legislation on the misuse of drugs or the international conventions on the control of narcotic or psychotropic substances."

Alarmist reporting included the following in The Guardian newspaper a week before the launch, "its active ingredient, thujone, has a similar molecular structure to cannabis. The accepted method of consumption has guaranteed that the drink is linked more to narcotics than to other alcoholic substances. It involves filling a spoon with sugar which is then soaked in the absinthe, set alight and dipped into a glass of absinthe, which also catches fire. At this point, water should be added, but such is the potency of the drink that it can be difficult to put out the flames: when the Pernod factory in Pontarlier was struck by lightning in 1901, it burned for four days."

Many UK County Councils mistakenly attempted to pull Hill's Absinth from bars only to find themselves being presented with copies of the EU certificate George had obtained which vouched for its legality.

Sadly, for George, all that his slow measured strategy achieved was to create an unfulfilled demand which was quickly exploited by imitators. Within 18 months of the Groucho Club launch, the UK market was awash with crude, high-alcohol, garishly-coloured, me-too products from the Czech Republic, Spain, Italy, Poland and Hungary. George realised he had to act fast to save his business and the reputation of absinthe, so in 1999 he embarked on a campaign to source genuine pre-ban absinthe, ideally by restarting production in France or Switzerland. Countries where absinthe was still banned.

Brexit is a reminder that Europe's rules and regulations apply equally to all EEC states and George Rowley believed he had established a legal precedent. If a product could be legally sold in one EU member state, it could, in theory, be sold in all of them, unless a state had specifically addressed the issue in the Maastricht Treaty. Fortunately for absinthe lovers, George assumed correctly, France had overlooked its absinthe ban and no provision for it was made in the Maastricht Treaty.

George's ability to out-bureaucrat Europe's bureaucrats also led him to unpick the terms of the 1915 ban and he discovered that the French had only prohibited the selling of absinthe in France, not the distillation of it. His persistence would eventually lead to the French legalisation of absinthe. And France is just one of the many countries where George and his wife Jane now sell La Fée Parisienne, the genuine French absinthe he made with the help of Marie-Claude Delahaye, founder and curator of the Absinthe Museum in Auvers-sur-Oise, France. La Fée was the first Grand Wormwood absinthe to be distilled in France since the 1915 ban. 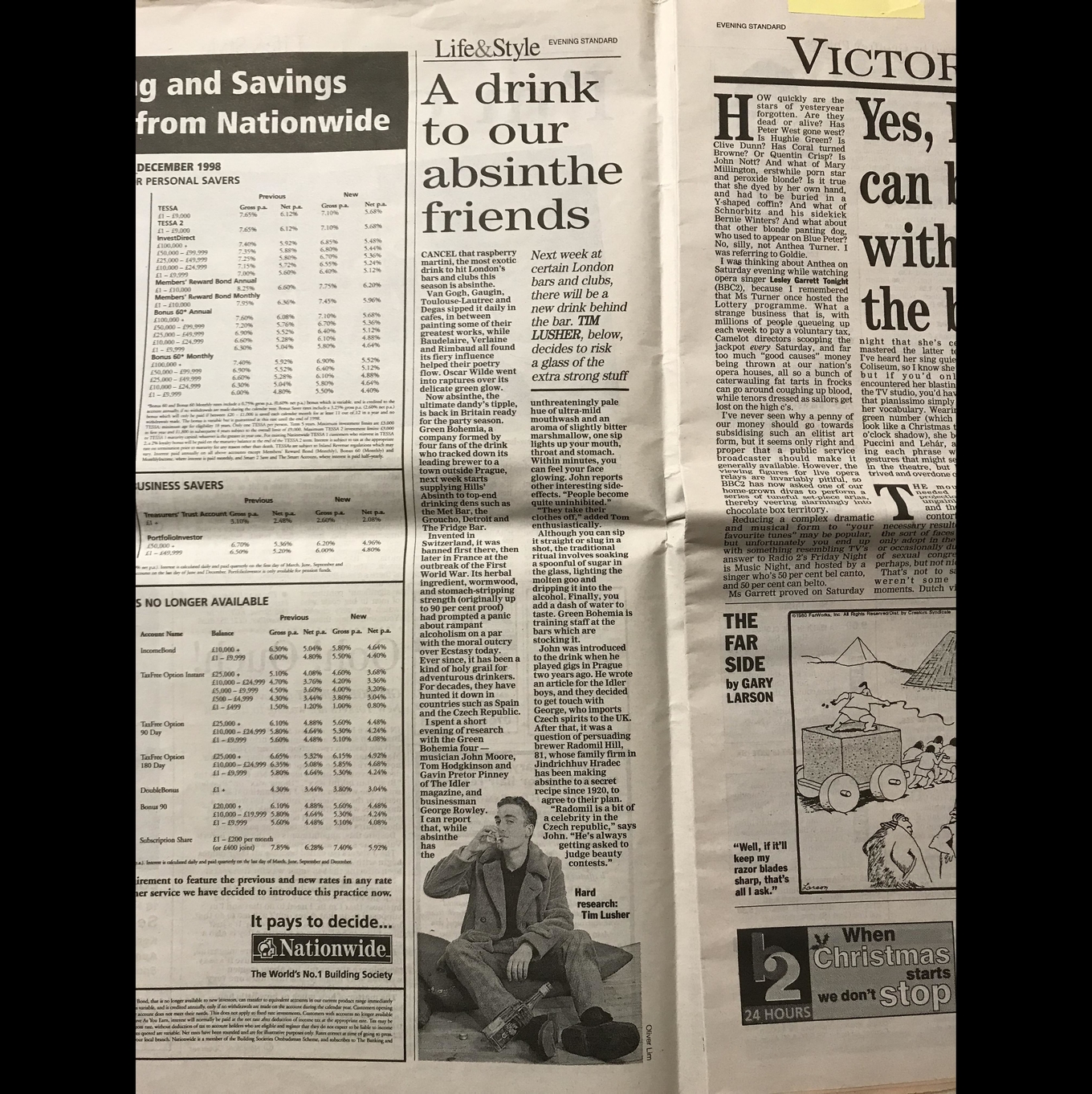