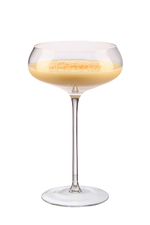 Absinthe has long been the drink of choice for artists, poets, writers and painters so it's being awarded a day is fitting.

Yet the Green Fairy was banned in many countries after a moral panic caused the belief that it was absinthe, rather than alcoholism or syphilis, that was sending both Bohemians and ordinary working folk mad. It is precisely this ban that makes today Absinthe Day, for it was on this day in 1997, that absinthe went back on legal sale in the USA since its 1912 ban.

And what better way to celebrate Absinthe Day than with a cocktail created by a true Bohemian, absinthe fan and one of the world's most influential bartenders, Dick Bradsell. Indeed, in December 1998, in an upstairs room at London's Groucho Club, when George Rowley launched the first absinthe to be sold in Britain since the First World War, it was Dick who was not only mixing long forgotten cocktails, but was also reassuring the assembled journalists that this supposedly banned spirit was safe to drink.

Dick made many drinks using absinthe but here are links to four of his original recipes:

Celebrate Cornwall's national holiday with us today as we commemorate Piran, the patron saint of tin-miners (due to his alleged discovery of tin and smelting!)

Piran was supposedly exiled from Ireland, and was thrown into the sea attached to a millstone. He survived though, and was washed up on Perranporth Beach, where he began to build a Christian oratory. Apparently his first disciples were a badger, a fox and a bear!

Piran was fond of a drink or two - hence the phrase "drunk as a Perraner." Despite his penchant for alcohol, the saint supposedly lived to 206...encouraging news for all of us here at Difford's Guide.

As tin-mining has been so important to Cornwall, the Cornish flag is a white-hot, tin-coloured cross on a black ore background. We took inspiration from the flag, and are recommending a Black & White Daiquiri to get celebrations kicked off. A super drink, and presented in appropriately Cornish colours!

Today is Beer Can Appreciation Day

Here at Difford’s Guide we’re huge fans of beer cans – indeed we prefer cans to bottles. So we’re happy to support this marketing gimmick of a

Australia Day is the anniversary of the First Fleet of convict ships arriving at Sydney Cove in 1788. Today though, it’s all about celebrating everything

If you thought child stars like Lindsay Lohan and Macaulay Culkin had it hard, spare a thought for the infant prodigy Wolfgang Amadeus Mozart, born on