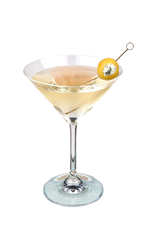 Anyone who remembers The Black Album, released November 2003, as Jay-Z's eighth studio album", will also remember that today is December 4th, AKA the great man's birthday.

Yes, he did devote an entire track to his birthday, and called it December 4th. Yes, his mother did feature on both the track and in the video. And, no, that hasn't stopped him becoming quite ludicrously successful, insanely wealthy, and staying married to the rather more obviously attractive Beyoncé.

Born Shawn Carter into unpromising circumstances, he has a business empire that he could only have dreamed of as a small-time drug dealer, spanning the gamut from sports representation to clothes and music. A hard-as-nails entrepreneur who won't help any business unless he's cut into the profits, one of the world's iconic rappers and, if you believe his wife's self-directed movie, an all-round nice guy and outstanding musician to boot, we're toasting him with a Z Martini.

Isaac Newton, who would go on to have one of the greatest brains known to history and to make one of the most important scientific calculations of all time, was born on this day in 1643.

Throughout his life, his brilliant curiosity led him to dabble in everything and anything he came across. He was based in the Tower of London for many years as Master of the Mint, where he waged war against counterfeit money, but most famously, he defined gravity after watching an apple falling from a tree.

We think it appropriate to mix an Apple Brandy Sour, a drink inspired by the very fruit that inspired Newton, and toast the guy who first understood what really keeps our feet on the ground.

It is also the Day of Chango

Today is the day of Chango, or Shango, or Xango, or Sango, one of the major deities of vodou and Santeria, rather charmingly conflated with Saint Barbara in much of the Caribbean.

The god of lightning, dance, thunder, power, fire and, umm, "passion", Chango picks his followers by hurling lightning bolts at them, hacks the earth's crust with his stone axe, and likes to see a woman with an axe in her head at his altar. Where does Saint Barbara fit into this? The colours match, apparently.

In Haitian vodou, AKA Voodoo, Chango is the thunder god. We will be making our own lightning tonight with a Voodoo I Do cocktail, a Tiki-style concoction created by Michael Layer in Berling, Germany.

This is also the day the pill arrived in the UK

On this day in 1961, the NHS made the contraceptive pill available to all British women - at least in theory - an event that arguably helped drive the sexual revolution.

An idea dreamt up by Marie Stopes, the first Pill came into being when women's rights campaigner Margaret Sanger funded research by a chemist called Carl Djerassi, and went into commercial production in 1960. Yet doctors were dubious as to whether they could prescribe the Pill for what they termed "social" as well as "medical" reasons. Even the Family Planning Association was torn as to whether to allow its doctors to issue the Pill to married women.

Coupled with the legalisation of abortion a few years later, the Pill transformed the lives of both women and men. We are toasting the ladies and gents behind this innovation with a Lady's Sidecar.

In Memory of Frank Zappa

In his 1989 autobiography, Frank Zappa famously opined that "you can't be a real country unless you have a beer and an airline". Although notorious for his eccentric behaviour, Zappa was actually quite a sophisticated Renaissance Man.

Musician, composer, film director and wit, he spoke against censorship and inspired musicians from both the rock and classical worlds before his early death on this day in 1993. Garnished with cheese-stuffed olives, the Z Martini has plenty of quirk, though, like the man himself, its port and vodka soul is classical, contemporary and indefinably classy.

... comment(s) for Today is December 4th

It's The Glorious Twelfth

Today is a great day for gourmets. If not such a good day for grouse. It is, of course, the Glorious Twelfth, the day when the shooting season opens in