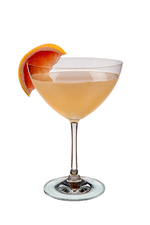 Sydney Harbour Bridge (fondly known as "the Coathanger") opened for public use on this day in 1932. The opening ceremony didn't run quite as smoothly as imagined, though.

Just as the guy with the golden scissors was about the cut the ribbon and declare the bridge open, a man on horseback in military uniform galloped past him, and slashed the ribbon with his sword. The intruder, Francis de Groot was arrested, and after a psychiatric test proved that he was sane, he was found guilty of offensive behaviour in a public place and fined the maximum penalty of £5 and £4 in costs.

Australians threw some spectacular celebrations: a Venetian Carnival, marching bands, decorated floats and a procession of passenger ships under the bridge. Most incredible though was the message read out at the opening ceremony, written by children at a primary school 320 miles away, and brought to the bridge by school children relaying the note. Celebrate the bridge's birthday tonight by mixing a Bridgetown Daiquiri or even a Kangaroo - perhaps the original name for a Vodkatini.

The anniversary of Pope Francis' inauguration

The world's most famous former doorman, Pope Francis, who worked as a bouncer in a Buenos Aires bar when he was a student, was inaugurated this day in 2013.

Pope Benedict XVI, his predecessor, had resigned, surrounded by scandals from sexual abuse of children through to gay prostitution in the Vatican and stolen letters. Representatives of more than 130 nations came to see the new chap say Mass.

In his first year, Francis relaxed the church's homophobia, saying "Who am I to judge?", and using the word "gay" instead of "homosexual". He chose Lampedusa, an island where boatloads of African migrants arrive in the hope of escaping poverty, for his first formal mass outside Rome.

He has stood up for the environment against market forces; he has abandoned the luxurious Vatican apartments for a second-hand car and a two-room flat; he is using Twitter; and he made Time Magazine's person of the year. We're far from fans of the Catholic Church, but we do think Pope Francis is a good thing. So, we're toasting Il Papa with a Papa Bear.

The anniversary of the Argentinian flag being raised over Georgia

This day in 1982, a group of Argentinians landed on South Georgia, a particularly inhospitable island in the South Atlantic populated by gadzillions of penguins and a few research scientists, and raised their national flag.

Undoubtedly the most exciting thing to have happened on the island, the incident would escalate into the Falklands War, in which more than 900 people died in battle for some islands with a population of under 3000, excluding sheep.

Today, just like in 1982, Argentine and British governments rattle sabres over the discovery of oil and gas off the Falklands but we believe the nationality of these islands should be whatever the people who live there, and have lived there for generations, want it to be. When asked they have consistently answered British. In the hope that their wishes continue to be respected and the ante is not raised again, we are drinking an Ante.

It's the anniversary of the start of the Iraq war

On 19th March 2003, President Bush announced military strikes against Iraq, a war conducted on the basis that Saddam Hussein held weapons of mass destruction. As has extensively been explored, Saddam didn't, and the evidence was faked.

It is hard to see that this will ever go down in history as a good war - if indeed any war can. Hence our choice of drink to sip whilst reflecting on the mistakes of the past, the aptly named Eastern Sin.

... comment(s) for The anniversary of Sydney Harbour Bridge opening