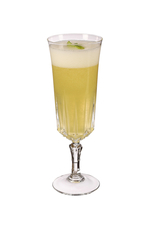 Back in 1605, the Carthusian Monks of Chartreuse were given a manuscript with the recipe for the Élixir Végétal they still make to this day. To celebrate 400 years, in 2005, the good folk who market Chartreuse for the monks established the first Chartreuse Day on 16th May.

Back in 2005, the illustrious monks produced 1605, a special celebratory edition of their Chartreuse Verte but we're celebrating today with a French 1605, a tasty riff on a French 75.

Another "National Day" in America, this time celebrating a cocktail created in 1925 at Paris' Ritz Hotel. A cocktail David Embury described as, "Just another freak champagne mixture. It is not half bad and the ladies usually like it."

So, we are seizing the opportunity to enjoy both a Mimosa and a Grand Mimosa.

It's also the anniversary of the Dam Busters

Even if you haven't seen The Dam Busters film, if you're English you'll almost certainly know the theme tune - it's the one sung at every England-Germany football match. Well, today is the anniversary of the original Dam Busters daring raid.

Operation Chastise began on the evening of this day in 1943 when a British Royal Air Force squadron set out for the Ruhr valley. The aim was to destroy three German dams using clever "bouncing bombs", and therefore flood Germany's industrial heartland.

Two large dams were destroyed but sadly more than a third of the 133 men who took part in the raid died on that night. The squadron leader, Guy Gibson, was awarded the Victoria Cross and was sent on a public relations tour of the USA and Canada.

Although immortalised in the brilliant 1955 movie The Dam Busters, in real life Gibson was not so fortunate. He insisted on returning to flying - against the wishes of many of his superiors - and was killed in 1944.

Tonight, we're toasting all those brave men and Barnes Wallis, the brains behind the "bouncing bomb" with an I B Damm'd.

Body art fetishists in the States will be, err, marking today as a special day by adding a hoop or two to their armoury. For, since 2007, in the USA, today has been National Piercing Day.

The practise of ear piercing goes back at least 5,000 years, while folk have been piercing noses for more than half that time. There are records of piercing more intimate body parts as far back as Ancient Rome. Unfortunately, however, there is no evidence at all that the exceedingly ouchworthy piercing known since 1970s San Francisco as a "Prince Albert" has anything to do with Queen Victoria's noble consort.

If all this makes you, like us, feel a little bit uncomfortable, may we recommend you uncross your legs and take the edge off with a Painkiller? This deceptively simple tropical cocktail from the famous Soggy Dollar Bar in the British Virgin Islands packs a remarkable punch.