We say goodbye to Catherine of Aragon 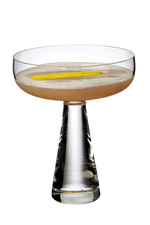 Henry VIII: Renaissance Man, a lover of wine, women, song and jousting, a poet and a musician with the bad habit of ditching wives and breaking up churches.

The rot set in on this day in 1533 when he got rid of Catherine of Aragon by getting his marriage to her annulled. How must she have felt, knowing that by then he'd already been married to Anne Boleyn for four months? But then how must Anne Boleyn have felt when she was beheaded for treason three years later? And all Henry wanted was a son. Despite working his way through six wives, he achieved just one male heir, who died aged 15.

At one feast, he had two twelve-foot tall wine fountains built to entertain his guests; he ate every meat known to man, and then some; and routinely consumed gallons of sweetened wine.

We are marking today with a Mary Rose, named for Henry VIII's warship which so unfortunately sank. For all the poor women who crossed Henry's path, you may also consider drinking a Bitter Lady.

It's also the day Bonnie & Clyde were gunned down

You may not have seen the movies, or even, necessarily, heard any of the songs, but you probably know the story of Bonnie & Clyde.

This outlaw couple mesmerized the Central USA during the Great Depression with exploits from bank robbery to, umm, murder, supported by a gang of hardened criminals. Why? Well, Bonnie Parker was blonde, sassy, and, in those prudish days, not only a criminal but one engaged in sex outside the bonds of marriage. An icon to a generation of women chained to children and the kitchen sink. The ultimate rebel, in fact.

Bonnie & Clyde's three year crime spree ended in a hail of bullets on this day in 1934, when Louisiana law officers ambushed them. Our cocktail of choice is, like Bonnie, connected to a bit of a Charlie, but more than palatable all the same - we are drinking a Bonnie Prince Charles.

Robert Moog was born this day in 1934. And, while today isn't yet formally Moog Day, it certainly should be. Because this engineering prodigy, who founded his first company when he was just 19, changed the shape of music by creating the Moog synthesiser.

Moog - who pronounced his own name to rhyme with "vogue" -- wasn't the first pioneer of electronic music, of course. Synthesisers had been around since the 1870s, and Moog himself took inspiration from the creator of the theremin.

But Doctor Bob's invention did transform music - because it sounded organic. It shaped the sound of the 60s, made the Bladerunner soundtrack possible, and, with Donna Summer's I Feel Love, opened the doors to disco and thence to electronic dance music.

Doctor Bob! Happy birthday. We're toasting you with an accidental creation of our own, the Moo'Lata - a Mulata Daiquiri made with Scotch instead of rum.

It's the anniversary of the first arm reattachment

This day in 1962, surgeons stuck a ten-year-old boy's arm back on - the first time a limb reattachment had been successfully concluded. And in these days where face transplants are beginning to work, a man can grow an ear on his arm and catching one's leg in the tractor is no longer a recipe for death, it is hard to remember quite how amazing that was.

The kid in question, Everett Knowles, had been trying to jump on a train when he was thrown into a stone wall, ripping his right arm off at the shoulder: he walked away holding his arm on with his left hand. Doctors reconnected his blood vessels, bone, skin and muscles, but left nerve surgery for a few months.

Four years later, Knowles could use his arm and hand as well as a natural lefthander could: he would go onto drive a HGV. Today, success rates for clean-cut amputations, where a patient reaches hospital in time, are almost 100%.

We're toasting the pioneering doctors who supported Knowles with David Embury's Doctor #1, and staying away from heavy machinery.

... comment(s) for We say goodbye to Catherine of Aragon