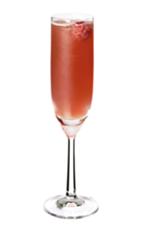 Rifle through your record collection, and put on some of the popular French singer's music as a tribute to her short, but incredible life.

A tiny, fragile-seeming chanteuse with the voice of a fallen angel, the woman who immortalised both "La Vie En Rose" and "Non, Je Ne Regrette Rien" was born Édith Giovanna Gassion this day in 1915 into the sort of family of which misery memoirs are made.

Abandoned by her junkie mother, Édith Piaf would grow up in her grandmother's brothel, learn stagecraft from her acrobat father, lose her only child when she was just 19, go through a bewildering cavalcade of lovers and, before her tragic and early death, become France's national diva and greatest international musical export.

A mere 4ft 8, even today, the songstress whose delicate frame gave her the nickname La Môme Piaf (the little sparrow) inspires movies, books and countless tribute albums. We are celebrating her memory and her work with a Rose Memoire, a suitably classy cocktail based on elegant rosé champagne.

There are a few places in the world with names that make you simply want to go - Timbuktu, Xanadu, Samarkand and Zanzibar. And, unlike Xanadu, Timbuktu and Samarkand, Zanzibar's actually fun when you get there.

So, in the interests of broadening geography, we're celebrating Zanzibar's independence day. That despite the fact that it's not independent any longer, but part of the East African nation off whose shores it lies - Tanzania - although it does have its own parliament and president.

Zanzibar is, fact fans, not an island but an archipelago, rich in the sort of flawless white sand beaches we could really do with at this time of year (at least in the Northern hemisphere), as well as historic Swahili architecture.

With one eye on those delicious beaches, those stellar coral reefs, and the capital, Stone Town, we're drinking the suitably named Epestone Daiquiri.

The Indian state of Goa, beachfront hippie paradise and mecca for anyone into trance, yoga or Enfield bikes, celebrates the anniversary of its liberation today.

Conquered by the Portuguese more than 500 years ago, Goa remained a part of Portugal until as late as 1961, when Indian forces invaded, the Portuguese surrendered, and, on this day, Goa became the smallest state in India.

We are rather partial to the odd curry, and find that both lassi and raita help them go down a treat. So we will be celebrating Goa's 50th anniversary with one of our own creations, a Raita Cocktail, with plenty of Indian spice. It contains cardamom, cumin, cucumber and yoghurt liqueur, along with a healthy slug of gin.