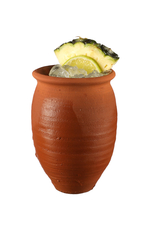 IKEA is for many, more about its meatballs than flatpack furniture and the Swedish chain sells a staggering one billion meatballs every year. Perhaps it was someone at Ikea who decided the humble meatball was worthy of a celebratory day, today.

However, it's not Swedish but Italian cuisine that most identify with meatballs and whether you prefer yours with pasta or on your pizza, we suggest you wash them down with a Cannonball cocktail.

... comment(s) for It's National Meatball Day