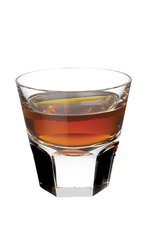 While we - and we guess you too -- are insufficiently royal or rich to figure in The Little Black Book, we know that you would love to join us in a Black Rose. The taste? It's in the Sazerac vein, just a little less elitist. Or console yourself with a Black Cherry, a deliciously simple fruity vodka martini-style cocktail.

If you saw Tom Hanks gallantly locking heads with Somali pirates in the 2013 movie, Captain Phillips, you'll probably know who Richard Phillips is. He's the man who was captain of the Maersk Alabama, when it was captured by Somali pirates, who proceeded to take him hostage. And, this day in 2009, he was rescued by Navy SEAL Team Six. Yes, the very same SEAL team that assassinated Osama bin Laden.

Perhaps predictably, various members of the crew, depicted as signally unheroic in the film, have come out to dispute Phillips' version of events. They say he ignored repeated warnings to move further away from the Somali coast, that he was known as a difficult captain, and that no one wanted to sail with him. Even the only surviving pirate, whose mother claims he was 16 at the time, argues from prison that his side of the story has yet to be told.