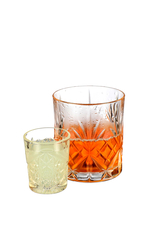 On this day in 1812, Louisiana became the 18th state of the United States, meaning that the Sazerac cocktail, is definitively not French but American.

Home to one of our all-time favourite cities, and cocktail geek mecca, New Orleans, Louisiana takes its name, obviously enough, from a French king called Louis, in this instance Louis XIV. It was fought over by both the French and the Spanish for some time before Napoleon sold it off in 1803, a deal that, covering over 800,000 square miles, was then probably the largest ever real estate deal.

The state of Louisiana covers only a fraction of the land that Napoleon sold. But as home to cocktails including the Sazerac, the Vieux Carré; and the Ramos Gin Fizz, it punches above its weight in cocktailian terms.

Happy birthday, Louisiana! We are enjoying a Sazerac in your honour.

Today is also the anniversary of Crocodile Dundee's Australian release

The world's most successful fish-out-water film came out today, featuring blue-eyed Paul Hogan as weathered bushman Mick Dundee. The film is still Australia's highest-grossing locally-produced picture and its success was replicated around the world. Crocodile Dundee also received a slew of award nominations, some of which resulted in wins, including a Golden Globe.

However, the film's huge profits were a bitter pill to swallow for the man the film was based on, Rod Ansell, who pursued Paul Hogan in court but failed to secure any earnings. Ansell was a Northern Territories man who made headlines in the 1970s after surviving 56 days stranded in an extremely remote area where he was reduced to sleeping in tree forks to avoid crocodiles and drinking wild buffalo blood for hydration. Flown to Sydney for interviews, he slept in a sleeping bag on the floor rather than the five-star hotel's bed, and was reportedly mystified by his room's bidet. Ansell's interview and curious city antics sparked Paul Hogan's interest, leading to the film being made.

Despite the fact that most Australians are city-slickers, not outback bushmen, the easy-going nature of Dundee was an attribute the Aussie audience identified with, and they loved to think the rest of the world believed the film showed the real Australia. Australians don't all carry huge knives, but today we toast the laidback spirit of Crocodile Dundee with a drink that's stirred with one – a Batanga.

Today is also the anniversary of the 1999 Soho Nail Bombing

This day in 1999 a bomb exploded in a packed London, Soho pub, the Admiral Duncan, hurling four-inch nails through a crowd of drinkers so setting the bank holiday weekend off to a horrific start. The bomb killed three people and injured almost 80.

A group named the White Wolves claimed responsibility for the attack, the third in a series to have rocked London. It turned out to be one man, David Copeland, a Neo-Nazi, who was sentenced to 50 years in Broadmoor Hospital.

Every year, some of the people affected by the bombing gather at 6pm at the Admiral Duncan, walk to St Anne's Church for a short service, and observe a two-minute silence at 6:37pm, the time the bomb exploded. In honour of the bravery of those who rushed to help the injured, not knowing whether there was another bomb, and London's inclusive spirit that makes such hate crimes rare (the Admiral Duncan is a LGBT bar), we're drinking a London Cocktail, a drink we discovered in Harry Craddock's 1930 The Savoy Cocktail Book.

It's also the anniversary of The Bristol Bus Boycott

Back in 1963, Britain was a less tolerant place, to put it mildly. The Race Relations Act was still a couple of years away, and discrimination against non-whites was common. So when the Bristol Omnibus Company, a government-owned company, instituted a policy banning the employment of "coloureds" as bus crews - they were allowed jobs in canteens and workshops - it wasn't completely atypical.

After four young black men decided not to take this lying down, the Bristol bus boycott began. Students, politicians and parts of the Bristol community marched and protested; pressure was applied to the unions, which had opposed apartheid in South Africa but not in the UK; and, exactly four months after the protest began, on the 28th August 1963, the colour bar was over. We're glad we have the Britain we have today. So we're toasting the brave guys behind the boycott, and the unions who came round in the end, with a Union Club Cocktail.