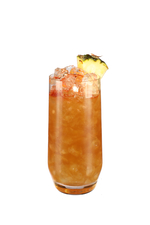 On this day in 1921 Dr J.B. Siegert & Sons medicinal liquor company, which had been marketing bitters out of first Venezuela then Trinidad for almost a century, initially as a cure for stomach trouble, reconstituted itself as Angostura Bitters Limited.

The company was, of course, already well-known. Almost 50 years previously, no less a personage than Mark Twain had written to his wife: "I want you to be sure to have in the bathroom, when I arrive, a bottle of scotch whisky, a lemon, some crushed sugar and a bottle of Angostura Bitters."

Twain had discovered the combination in London, and drunk it before breakfast, before dinner, and also as a nightcap: he firmly believed it helped with his digestion, and who are we to say it didn't?

We are fans of bitters, the unsung hero in many a cocktail, as well as the Australian driver's friend, the Lemon, Lime and Bitters, and so, in honour of Doctor Siegert's creation - and Mark Twain's fondness for Scotch and bitters - we prescribe a Dunmore Cobbler, which contains both of those ingredients in spades. And, given it's still August (just), you may also chill with a Colonial Cooler, discovered by the gentleman adventurer Charles H. Baker, Jr. in the Sandakan Club in Borneo - precisely the type of tropical environment for which Dr Siegert invented his bitters.

Victor Jules Bergeron is credited for creating the Mai Tai cocktail at his Trader Vic's restaurant in Oakland, near San Francisco in August 1944. Despite this, for years, most of the bar industry, and indeed the internet at large celebrated Mai Tai Day on the 30th June.

However, according to a signed proclamation on Trader Vic's website by Rebecca Kaplan, Council Member of the City of Oakland Mai Tai Day, at least in Oakland, should fall on 30th August. You can read the honourable lady's proclamation while you sip on a refreshing Mai Tai. Then perhaps also try Difford's Mai Tai recipe

You may also want to try Don the Beach's Mai Tai recipe as he is thought by some to be the cocktail's true originator. Perhaps also read about the Mai Tai controversy.