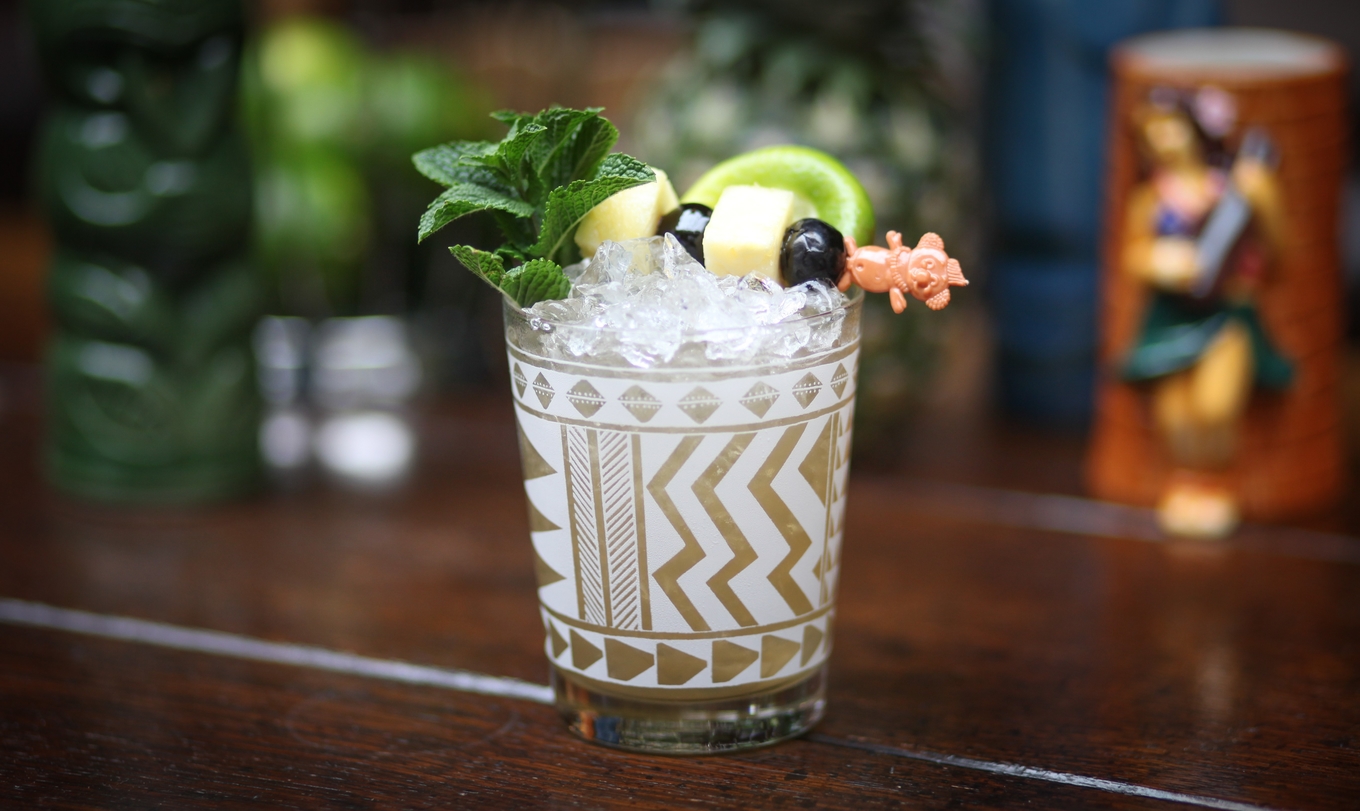 A Mai Tai is basically a Daiquiri based on aged rum with orange curaçao liqueur and orgeat syrup contributing to its flavour and sweetness. The Mai Tai is the king of Tiki cocktails and one of the most enduring of all vintage cocktails, but like most classic drinks there is controversy over its origin while its reputation is tarnished by poor renditions.

The Mai Tai is a truly great cocktail with the strength and character of rum harmoniously combined with fruity sweetness, rich almond and tart citrus. If balanced and made-well, these all come together to create a delightfully refreshing and flavoursome cocktail.

The history of the Mai Tai cocktail

In 1934, Victor Jules Bergeron, or Trader Vic as he became known, opened his first restaurant in Oakland, San Francisco. He served Polynesian food with a mix of Chinese, French and American dishes cooked in wood-fired ovens. But he is best-known for the rum-based cocktails he created and particularly for the Mai Tai.

The story goes that one evening, in 1944, he tested a new drink on two friends from Tahiti, Ham and Carrie Guild. After the first sip, Carrie is said to have exclaimed, "mai tai-roa aé", which in Tahitian means 'out of this world - the best!'. Thus, Bergeron created and named the Mai Tai cocktail.

Others, particularly Ernest Raymond Beaumont-Gantt, then owner of a Hollywood bar called Don the Beachcomber's, have also laid claim to the creation of this drink. But as Vic says in his own Bartender's Guide, "Anybody who says I didn't create this drink is a dirty stinker." Indeed, he says rather more and due to the controversy surrounding the origin of this drink, follows an extract from his 1972 Trader Vic's Bartender's Guide Revised Edition:
"There has been a lot of conversation over the beginning of the Mai Tai. And I want to get the record straight. I originated the Mai Tai.

Many others have claimed credit. Some claim it was originated in Tahiti. All this aggravates my ulcer completely. The drink was never introduced by me into Tahiti except informally through our good friends, Estham and Carrie Guild.

In 1944, after success with several exotic rum drinks, I felt a new drink was needed. I thought about all the really successful drinks: martinis, Manhattans, daiquiris... all basically simple drinks.

I was at the service bar in my Oakland restaurant. I took down a bottle of seventeen-year-old rum. It was J. Wray Nephew from Jamaica - surprisingly golden in colour, medium bodied, but with the rich pungent flavour particular to the Jamaican blends. The flavour of this great rum wasn't meant to be overpowered with heavy additions of fruit juices and flavorings. I took a fresh lime, added some orange curaçao from Holland, a dash of rock candy syrup, and a dollop of French orgeat for its subtle almond flavour. I added a generous amount of shaved ice and shook it vigorously by hand to produce the marriage I was after. Half the lime shell went into each drink for colour; and I stuck in a branch of fresh mint. I gave the first two of them to Ham and Carrie Guild, friends of Tahiti, who were there that night.

Carrie took one sip and said, "Mai Tai-Roa Aé." In Tahitian this means "Out of this world - the best." Well that was that. I named the drink "Mai Tai".

The drink enjoyed great acceptance over the next few years in California, and in Seattle when we opened Trader Vic's there in 1948.

In 1953, I took the Mai Tai to the Hawaiian Islands when I went down for the Matson Steamship Lines - to formalize drinks for the bars of their Royal Hawaiian, Moana, and Surfrider hotels. Any old Kamaaina can tell you about this drink and of its rapid spread throughout the islands.

In 1954, we further introduced the Mai Tai when we included it among other new drinks in a bar service for the American President Lines.

Now it is estimated that they serve several thousand Mai Tais daily in Honolulu alone; and we sell many more than that daily in our twenty Trader Vic's restaurants throughout the world.

Anybody who says I didn't create this drink is a dirty stinker." 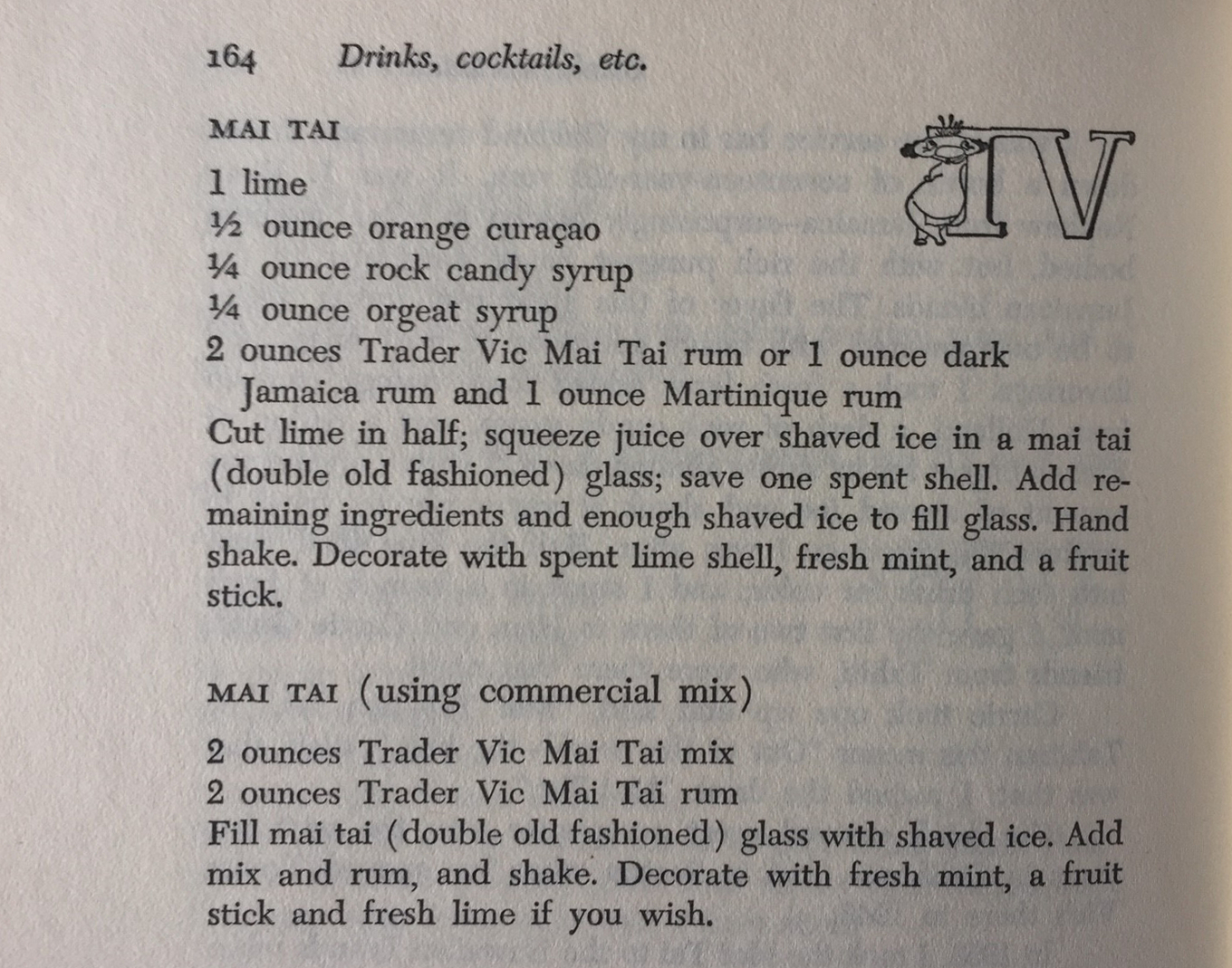 It is claimed that Ernest Raymond Beaumont-Gantt first served this drink in 1933 at his Don The Beachcomber's bar in Hollywood, California. This is some ten years earlier than Bergeron's Mai Tai moment in cocktail history.

In his 2014 Potions of the Caribbean, Jeff Berry recounts that Don "told Edward Brownlee [a Tiki-carver and friend of Don] that Vic had actually derived the Mai Tai's flavour profile from a punch that Vic had particularly liked at the Beachcomber's: "The Q.B. Cooler was the basis for a drink he took with him, and he called it the Mai Tai." Fred Fung, who worked as Vic's executive assistant for 41 years, disagrees. "Vic did copy Don The Beachcomber's look. He did go down and copy. But the Mai Tai, he did concoct that, and Carrie Guild did name it."

Such was the success of the Mai Tai in Vic's growing chain of restaurants that he started marketing a bottled Mai Tai mix. In 1970, he sued Don for releasing a rival Don The Beachcomber's Mai Tai Mix with a label claiming to be the drink's originator.

The case went to court where Vic was forced to reveal his then top-secret recipe, which he published in a seven-page press release titled "Let's Get the Record Straight on the Mai Tai." This included an affidavit by Carrie Guild confirming the story set out by Vic above, that he created the drink in 1944 and that she had named it. Vic went on to win the lawsuit.

In Vic's 1976 Helluva Man's Cookbook he says, "We originated this drink; we made the first Mai Tai: we named the drink. A lot of bastards all over the country have copied it and copyrighted it and claimed it for their own. I hope they get the pox. They're a bunch of lousy bastards for copying my drink."

While Vic certainly copied much from Don, including his restaurant's concept - what we now call Tiki, it seems clear that Vic created the Mai Tai. But whichever of the two actually created the Mai Tai; it is Trader Vic that made it famous and it is his recipe that endures. 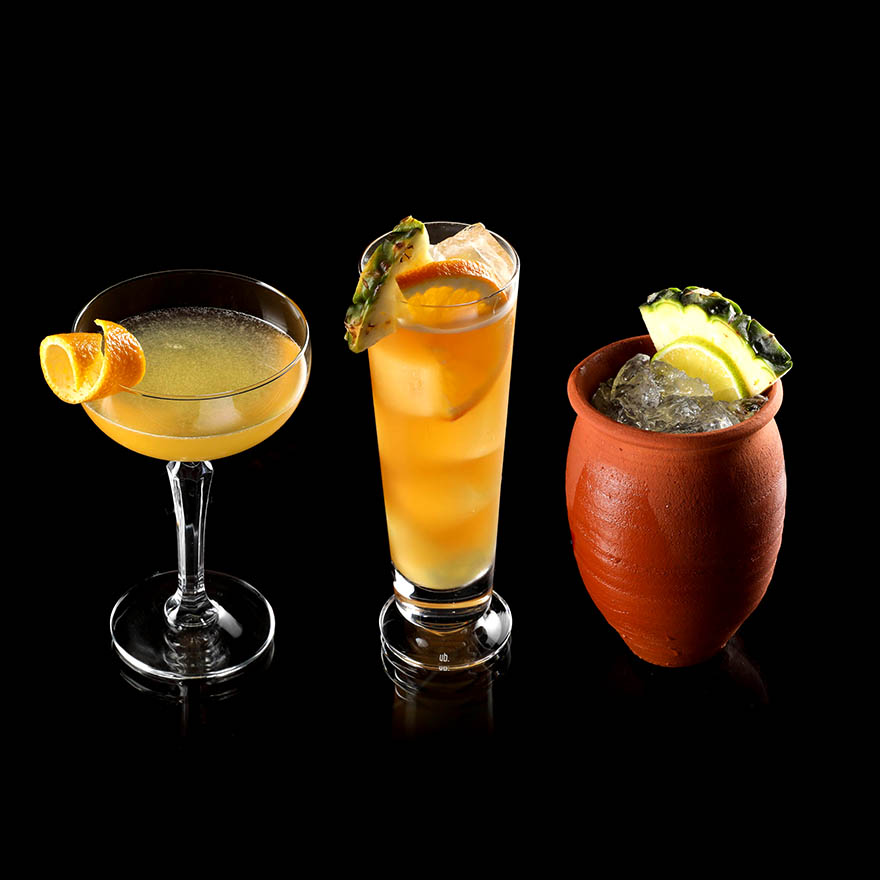 In cocktails, apricot brandy is one of the most used of the traditional range liqueurs and this fruit liqueur continues to thieve in contemporary recipes.