The shortest or Longest day 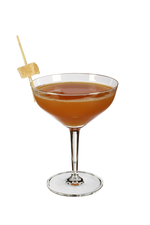 Depressingly for all of us in the Northern Hemisphere, The winter solstice marks the end of autumn and the start of winter. We're marking the change of seasons with a warmingly spirituous Winter Cocktail from Albert Stevens Crockett's 1935 Old Waldorf Astoria Bar Book.

Fed up of schmaltzy Christmas TV? Well, why not download a classic, and mark the anniversary of The Graduate's release, this day in 1967.

Despite being over five decades old, The Graduate hasn't aged in the slightest, so treat yourself to a night in, mix a Mrs Robinson and enjoy the film.

Ranking 3.6 on the Richter scale, it injured no one and caused no damage, although it was felt in much of northern England, as well as Scotland, Wales and the Isle of Man. Apparently, Britain should expect an earthquake this size about once a year, with bigger quakes about once a decade.

... comment(s) for The shortest or Longest day