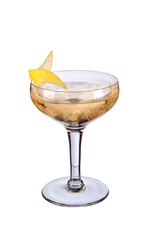 In America, the second Saturday in June is celebrated as National Gin Day, while in Blighty and elsewhere Gin Day has taken on global significance. And rightly so, after all, Britain has exported the term London Dry Gin to the world, so the use of the word "World" on this celebratory day cannot be overstated.

Anyway, whether you're celebrating National Gin Day or World Gin Day, today is a day to drink gin, rejoice with a refreshing G&T, and enjoy gin cocktails. What better way to start than with the classic Gin Cocktail before one of our 20 best gin cocktails.

This is also the day of the Trojan Horse

They had sailed to Troy to bring back Helen, stolen by Paris of Troy from Menelaus, the king of Sparta, ten years previously. The Greeks, still unable to infiltrate the city, had built a huge, hollow wooden horse, left it outside the city gates, and pretended to sail away. The unwitting Trojans dragged the Trojan Horse into the city, and after darkness, Greek soldiers, hidden inside, crept out and opened the gates. Thus the Trojans had brought about their own destruction.

It may all be fiction, of course, but in thanks for a great story, today we're drinking a Horse's Neck with a Kick.

If you've ever seen 2001: A Space Odyssey, you'll know the work of Richard Strauss. The "der, der, der" which introduces the monolith is almost as ingrained into popular culture as Beethoven's "da da da dum" Fifth Symphony - You'll hear it in Wall-E, where the jello-like humans begin to walk, in Zoolander, where he tries to figure out how to use a computer, in The Simpsons Movie, when Itchy and Scratchy go to the moon, and more. During the 70s, Elvis used it to accompany his entrance onto stage, while a funk version made the charts.

Yep, the man who brought us the intimidatingly-titled-unless-you're-German Also sprach Zarathustra (Thus Said Zarathustra), was born this day in 1864, in Munich, Germany. And some argue he's the greatest musical figure of the 20th century - his operas, most notably Der Rosenkavalier and Salome - are still performed the world over.

We're toasting Strauss, and all his works, but particularly Zara...whatever, with an aptly named Zaza, an eminently drinkable, old school blend of gin and Dubonnet.