It's the anniversary of The Boston Tea Party 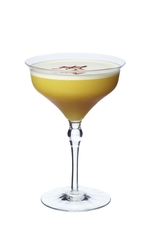 As an argument about tax and monopolies escalated, on this day in 1773 it culminated in a boat-based riot. As the captains and crew of three British ships lay sleeping, more than a hundred men dressed as Native Americans, complete with tomahawks, crept into Boston Harbor.

Merchants and tea house owners in Massachusetts were increasingly aggravated about the Tea Act, which whacked huge taxes on imported tea, so on 16 December 1773 to stop the taxed, imported tea making it onto the quayside, they divided into three groups and stormed the ships, braking open the chests of tea the ships were carrying, and scattering tea leaves, worth over a million dollars in today's money, into the sea.

The Boston Tea Party, was one of many acts that would lead to American independence. We are marking the anniversary not with tea but with a Boston Deluxe, but then you may want your own Boston Tea Party

Mankinis at the ready, chaps! Today is Kazakh Independence Day, a time to make benefit glorious nation of Kazkhstan, and remember those happy days when Sacha Baron-Cohen was funny.

Not that the good folk of Kazakhstan necessarily need to be reminded of that. For, while the country's tourism minister has since acknowledged that Borat was good for tourism, at the time the response was rather less measured. An indignant embassy explained that the favourite Kazakh beverage was not "fermented horse urine" - though some have compared Kazakh wine to this - but "fermented mare's milk". Sooo much nicer, we're sure you'll agree.

But Borat did get some things right. Notably apples. The apple is, in fact, native to Kazakhstan, and the perfect masking agent - we're sorry, we do, of course, mean "partner" - to Kazakhstan's fine brandy. Though you may, as we do, prefer cognac, served here in one of our own creations, a Steep Flight.

... comment(s) for It's the anniversary of The Boston Tea Party