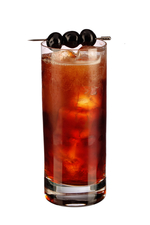 Around the world today, thousands of black-clad nihilists will be upping the make-up and partying like it's 1985. You can find them in some quite surprising places, including Attiki, Mexico City, Cape Town, Madrid, Puebla, São Paulo – even Winnipeg! – as well as more obvious spots like Berlin, London and San Francisco.

Goth culture originated in England during the early 1980s as an offshoot of punk. The goth look is also, of course, an extremely handy symbol of teenage alienation and individuality. As a look, nothing says teenage poet more intensely than a pair of winklepicker shoes, a thousand-yard stare and some frayed black lace or velvet.

Where other trends have faded away, it has continued to grow and evolve, taking its imagery and references from 19th-century Gothic literature and contemporary horror films. If you want to join all those moody souls, just for one day, no Daiquiri is darker than a Black Daiquiri and no solemn drink as refreshing as a Black Spring.

It's also the anniversary of the Northern Ireland Peace Deal

This day in 1998, more than 80% of the voters of Northern Ireland turned out to say yes to the Good Friday Peace Agreement, marking a turning point in a conflict that had rolled on for decades.

The English, of one form or another, had been messing with Ireland since 1167, and in the 1600s a policy of deliberate settlement began, planting Protestants in the north of the island. That meant that in 1921 Ireland was divided into two parts, along religious lines.

The Peace Agreement has turned things around. Although Northern Ireland still suffers from terrorism, Sinn Fein is part of the political system, the mainland bombing campaign is thankfully long over, and an overwhelming majority of Northern Irish citizens believe the region is moving in the right direction.

We're toasting this achievement, with - what else?! -- an Irish Coffee.