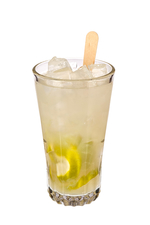 You don't get much more Brazilian - at least above the waist - than a Caipirinha, the national spirit (cachaça) pounded with lime and sugar, and served stirred with cracked ice.

The good folks of Brasilia, Rio and Sao Paulo will be indulging quite a bit today, the anniversary of their country's declaration of independence in 1822. Expect flags, military parades, and all-round celebrations. In America, however, today is known as Brazilian Day. And for a pain-free way of getting Brazilian, you can't do better than a Caipirinha.

Cachaça is a superbly versatile cocktail base spirit with its pungent aroma and pronounced flavours particularly suiting fruity cocktails. To illustrate this diversity we've selected our 20 best cachaça cocktails.

In fact, after water and tea, beer is the most commonly consumed drink in the world. It's also probably the oldest alcoholic beverage in history, with the first barley beer thought to date back to the 5th millennium BC, hailing from the Zagros Mountains of modern-day Iran.

These days there are more than 100 different styles of beer (and counting), the culmination of centuries of brewing grains and hops, and beer-drinking is embedded in the culture of countless communities, with social traditions such as pub crawls, beer festivals, pub quizzes and pub games (beer pong anyone?) at its heart.

Did you know that in Germany, it's considered bad luck to break eye contact whilst clinking glasses with someone? In the Czech Republic, you should place a coaster over your glass when you're done drinking. And in Iceland, it's considered a faux pas to drink another person's beer at a house party. That's if you can get hold of it in the first place - there are only 51 Vínbúðin or state-owned retail stores that sell alcohol in the entire country so Icelanders have to be well-organised if they're entertaining at home.

So, if today is all about loving beer, why not take a tour of a brewery, grab a 12-pack to enjoy with some pals, pay a visit to your local pub or bar or maybe even try a beer cocktail? We can recommend the Weissen Sour, an unusual long drink but one in which notes of wheaty bourbon, wheat beer, marmalade and citrus work harmoniously together.