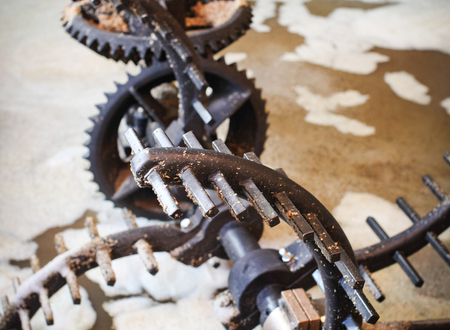 Status Operational
Established: 1881
Owner: Rémy Cointreau
Capacity: 1.5 million liters
Visitor Policy: Visitors welcome throughout the year
Tel: +44 (0)1496 850 221
Website: http://www.bruichladdich.com
Pronounced ‘Brook-Laddie’ and meaning ‘shore bank’ in Gaelic, the Bruichladdich distillery was built in 1881 by the Harvey brothers on the western shore of Loch Indaal on the Isle of Islay, making it the most westerly working distillery in Scotland, second only to Kilchoman. In 2004 Bruichladdich was the first distillery to grow barley locally on Islay for its single malts, probably the first time this had been done in the island’s history. It now works with ten local farms, releasing the whiskies in its Islay Barley single vintage series. It is also a major distiller of organic barely and explores heritage barleys such as Bere Barley. Affectionately known as ‘The Laddie’, the distillery is unusual in that its two wash and two spirit copper pot stills are exclusively used to produce its own single malt whisky bottlings. Bruichladdich is not produced for use in blends. A fifth still, a Lomond pot-still, uniquely adapted by head distiller Jim McEwan, is used to make The Botanist Gin using 22 locally foraged botanicals. Three different styles of single malt whisky are made by the “Progressive Hebridean Distillers” at Bruichladdich with three different brand names representing three varying degrees of peat: Bruichladdich: Always unpeated. Light, fruity, delicate and elegant. Port Charlotte: Heavily peated to 40ppm. Peat with finesse and elegance. Octomore: (released in 2008) Super heavily peated to 160ppm + and billed as being the world’s most heavily peated whisky. All whisky and gin produced at Bruichladdich Distillery is reduced to bottling strength using Islay spring water from nearby Octomore Farm, and bottled on Islay without chill-filtration or caramel colouring.

(For production of The Botanist Dry Gin please scroll down)

Production at Bruichladdich is tradition, very traditional, using Victorian equipment and little changed techniques. Bruichladdich proudly use 100% Scottish barley and are one of Scotland’s major distillers organic barley. Most of the malted barley used is sourced from maltings on the mainland but some Island harvested barley is also used and this is malted on the island by brothers Andrew and Neil Wood at nearby Octofad farm. 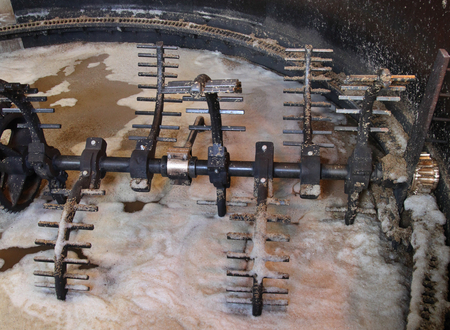 The barley is ground using the last remaining belt driven Robert Bobby Mill which was refurbished in 2001 by the only man in the UK with the expertise to do so, two weeks before he died. The grist produced by the Bobby Mill is used to charge the original seven tonne cask iron rake-and-plough mash tun which dates from 1881. This is the biggest of the three surviving rake-and-plough mash tuns still operating in Scotland and is used to convert and extract the sugars from the malted barley with hot water. 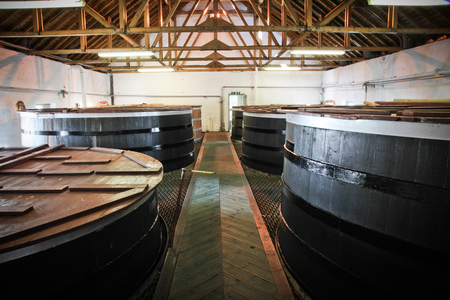 The distillery was built on a gentle slope and gravity is used to move the surgery wort produced in the mash tun to the six wooden washback fermentation vessels, which together have a capacity of 210,000 litres. Fermentation is slow and many devotees maintain that these old wooden vats are an essential part of the Bruichladdich’s flavour. Jim McEwan, Production Director at Bruichladdich quotes the French culinary saying: “it is in the oldest pots that the best soup is made.” 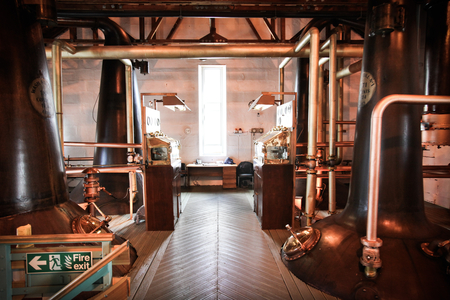 The fermented beer-like wash is transferred from the washbacks to charge one of the two tall copper wash stills with 12,500 litres. Built in 1881, one of these wash stills is Scotland’s oldest. The distillate (low wines) is charge one of the two unusually tall (6 metre) and narrow-necked (0.9m) spirit stills, each with a charge of 7,100 litres. All four whisky stills at Bruichladdich are indirect steam heated and all have shell-and-tube condensers. 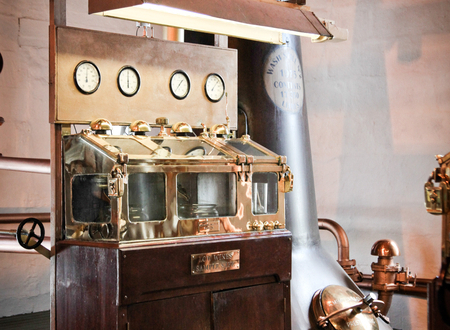 Proclaiming themselves as “Progressive Hebridean Distillers”, the folk at Bruichladdich have produced whiskey with four distillations, the 1st at 30%, the 2nd at 70%, the 3rd at 80% and the 4th producing a distillate 92% alc./vol.. 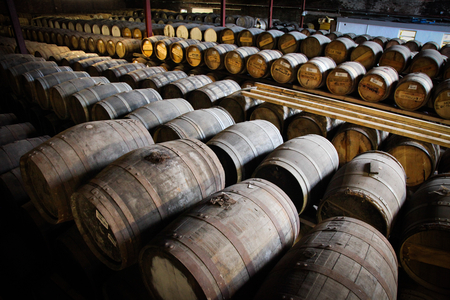 Maturation is predominantly in ex-bourbon barrels but some 25% is in first-fill and refill sherry seasoned casks, and a large percentage of ex-wine casks, many from famous Bordeaux estates, are also used. Bruichladdich have eight bonded warehouses on site and a further four 2 miles along the coast road at Port Charlotte. Of these six are dunnage warehouses and two are racked, giving a total capacity of 35,000 casks. 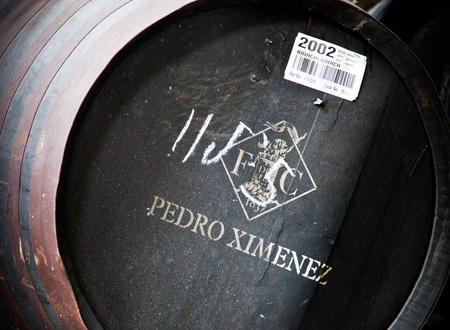 Unusually, bottling takes place at the distillery’s own onsite bottling hall which was completed in May 2003 and is named after the Harvey Brothers who originally built the distillery in 1881.

The soft spring water water used to reduce the whisky to bottling stretch comes from the nearby Octomore farm which sits on the hill behind Bruichladdich’s Port Charlotte aging warehouse. The farm is owned by James Brown, who along with his other duties (lighthouse-keeper and policeman) takes water to the distillery two to three times a week.

On site bottling necessitates the bottles (made by France’s Saver Glass), capsules, boxes and labels being brought onto the island by ferry for filling, labelling and packing, before being shipped back to the mainland for distribution. This obviously adds significantly to the cost of bottling but the folk at Bruichladdich passionately believe in the exclusive use local water for reduction and want to keep their products estate produced as far as possible.

Bruichladdich do not chill-filter or add caramel colouring to their whisky. 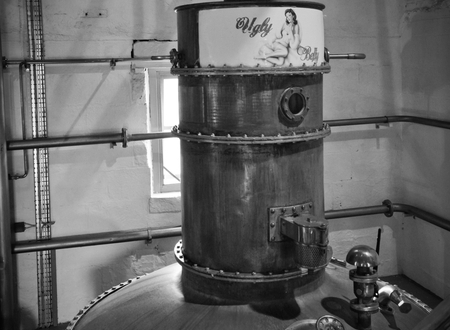 In January 2010, repairs to Bruichladdich’s wash still necessitated its temporary removal, requiring a large whole to be knocked into the still house wall (this is now a large window). At the same time space in the still room was freed up by the removal of the pot ale vat, intermediate spirits receiver and feints charger, presenting the opportunity for the installation of a gin still.

Initially resistant to the idea of distilling a gin, Jim McEwan, Bruichladdich’s famous head distiller, rapidly became the most enthusiastic exponent, tasting other gins on the market and looking to Islay, his native home, for the new gin’s signature botanicals. He also enthusiastically set about looking for a suitable still. Only ten years earlier, a small group of investors had reinstated Bruichladdich and due to limited funds, they did so with existing and acquired second-hand equipment. Perhaps, with this in mind, when the gin project was being developed at no time was buying a new custom made still even considered. Enter ‘Ugly Betty’. 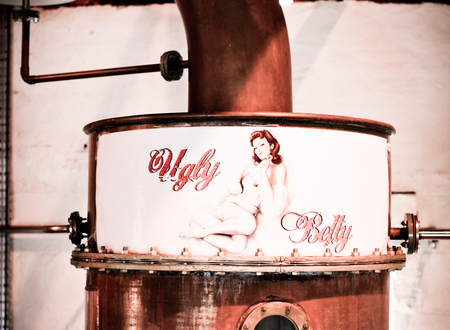 The 11,600 litre Lomond pot-still used to distil The Botanist was rescued from the old Inverleven Distillery and due to its unshapely appearance is now known as ‘Ugly Betty’. She is the last known surviving example of an experimental cross between a Coffey still and a pot still developed after the Second World War by chemical engineer Alistair Cunningham and draftsman Arthur Warren at Hiram Walker.

The Lomond still was designed so that it could imitate the style of distillate produced by numerous other stills by adding or removing sections of its thick, column-like neck, so replicating the effect of different still “neck” lengths. One section housed three fin-like baffles which could be could be opened in varying degrees from horizontal to vertical so also varying the amount of reflux by moving the internal fins.

Built by Ramsden of London, Betty was the very first Lomond still and was installed in 1959 at Inverleven, the single malt distillery within the grounds of the huge Dumbarton grain distillery complex, just outside Glasgow. Inverleven single malt itself was made in a pair of regular pot stills while Betty was used to make a single malt named after the nearby Loch Lomond - hence Betty and the other similar stills which followed her, became known as Lomond stills. Incidentally, a Lomond still remains in use at Scapa distillery in Orkney but the internal baffles have long since been removed due to their constantly needing cleaning, involving taking the still to pieces.

Betty is the last Lomond still operating with its internal baffle plates still operational but Jim McEwan had other modifications made to Betty’s top two neck sections. Above the section which houses the Lomond baffle fins he had another section added which houses 80 copper tubes arranged in a honeycomb pattern. Referred by some to as “Jim’s Gattling Gun”, this slows the rate at which the vapour rises through Betty’s wide neck and also introduces the vapour to a large surface area of copper which removes any sulphates. Many believe that this additional copper contact also softens the spirit. The top section of the still is a water box, cooled by cold water continually being piped through the section so causing reflux and slowing down the passage of vapour to the lyne arm.

Jim not only modified the still itself, he also added a botanical chamber to the middle of the lyne arm. This is used to hold a bag of the more delicate botanicals, particularly the leaves and petals which are hand-picked on the island. The vapour must pass through these botanicals, so extracting their flavour. A return leg pipe in the base of the botanical chamber allows some further reflux back into the still’s neck.

The 22 native Islay botanicals used are all hand-picked by retired husband and wife botanists, Richard and Mavis Gulliver. They forage the islands hills, peat bogs and coastal shores to collect the botanicals and then prepare them for use in distillation, filling the bags used in the stills botanical basket. The botanicals are used dried or fresh, dependent on their availability – obviously more fresh leaves are available year round than flowers.

The other, more traditional botanicals (barks, seeds and peels) are steeped in the pot still itself in the traditional manor. Betty is charged with 12,000 litres of wheat neutral spirit reduced in strength to around 50% alc./vol. using water from the nearby James Brown Spring at Octomore. Named after the farmer who owns the land where the spring emerges, the water is carried the two miles to distillery in tanks several times a week.

In the evening prior to a gin distillation, Jim starts the still to raise Betty’s temperature just to the point when she can barely be touched. He then starts loading the botanicals into the still, carefully floating them on the surface of the hot spirit. Using juniper berries and coriander which readily float first, Jim builds a botanical raft. The heat gradually causes the berries to pop and the botanicals sink. The steam is turned off and the still and its contents left to steep overnight. Distillation starts the next morning.

Betty has a disproportionately large number of steam heating pipes running across its base so allowing very controlled delivery of heat. Jim runs Betty at a low, constant pressure for the slow simmer 17 hour distillation, so gently coaxing complex aromatics from the botanicals.

The final gin distillate is reduced to bottling strength using the same locally sourced spring water as is used in distillation. No sugar or other additives are added and filtration is simply via a pad filter at ambient temperature to remove any particles - no chill filtration is used. 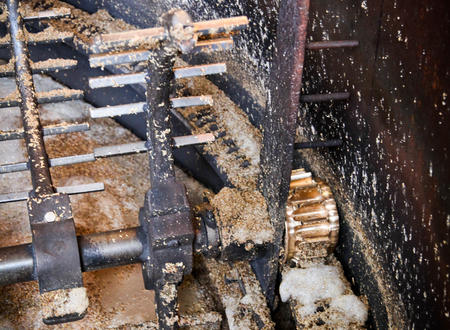 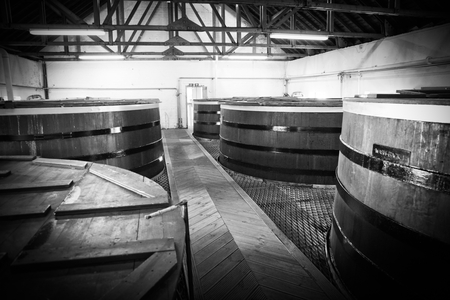 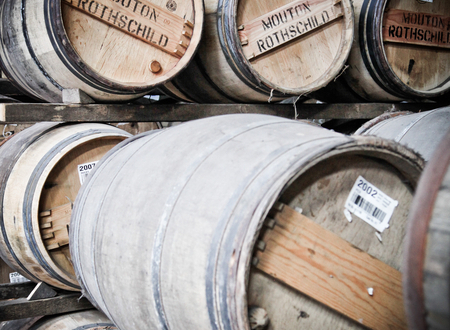 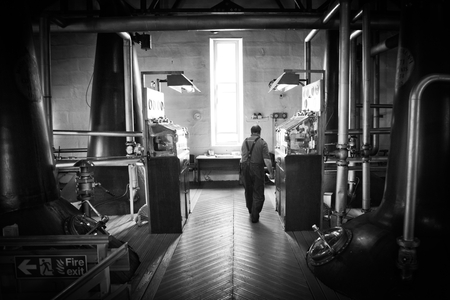 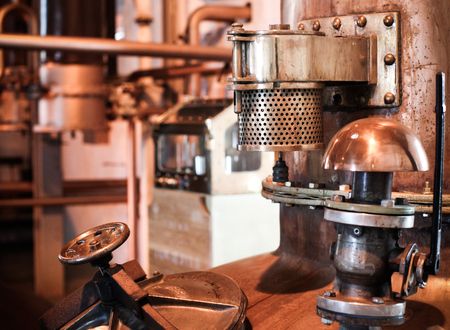 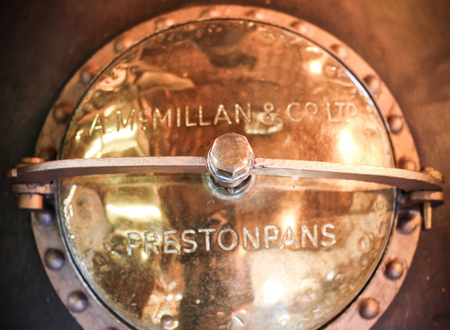 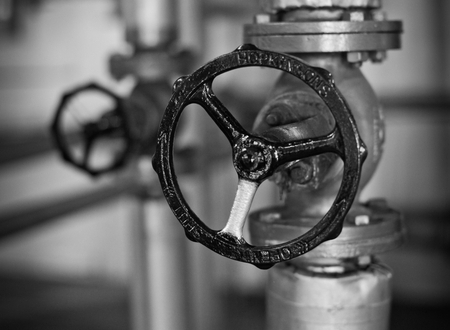 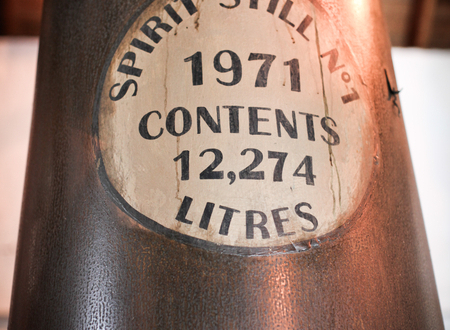 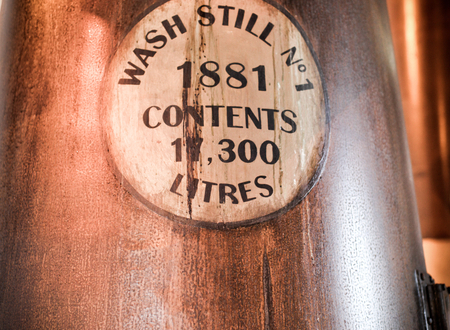 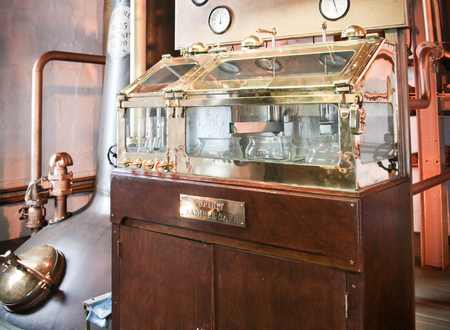 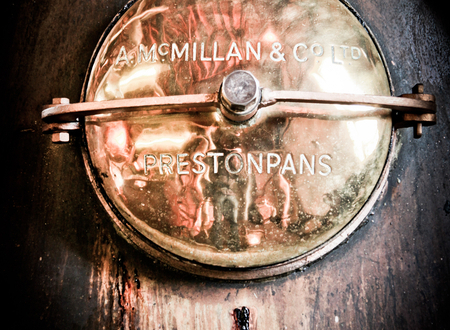 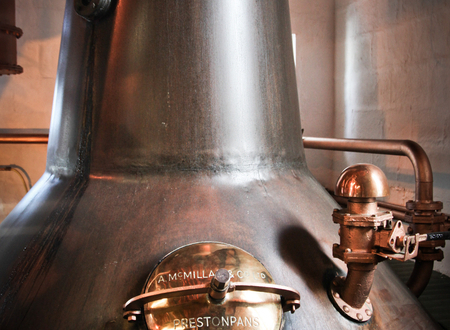 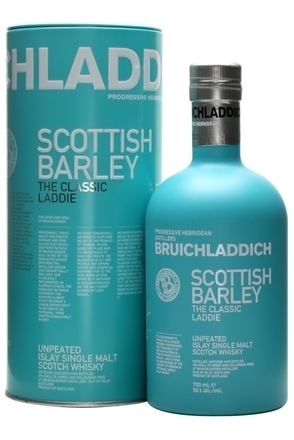 Distilled from 100% Scottish barley, this unpeated malt without an age statement is Bruichladdich's present signature... 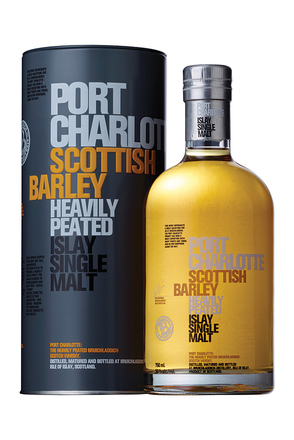 Distilled from heavily peated (40ppm) Scottish Barley at Bruichladdich Distillery, then aged just along the coast at... 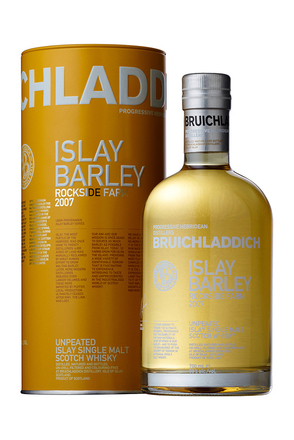 Released in 2013, this is the third in Bruichladdich’s ‘The Islay Barley series’. The barley in question was grown...

Released at the end of 2011, as the name suggests this is the 10-year-old base entry from Bruichladdich. Blended from 90...

The forth manifestation of Bruichladdich’s Black Art, so named due to the secrecy behind what casks Master Distiller... 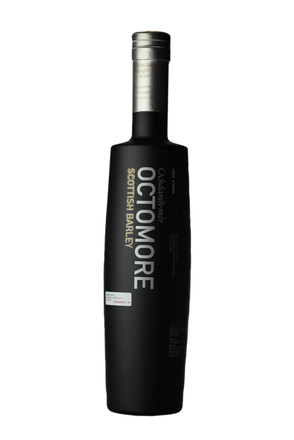