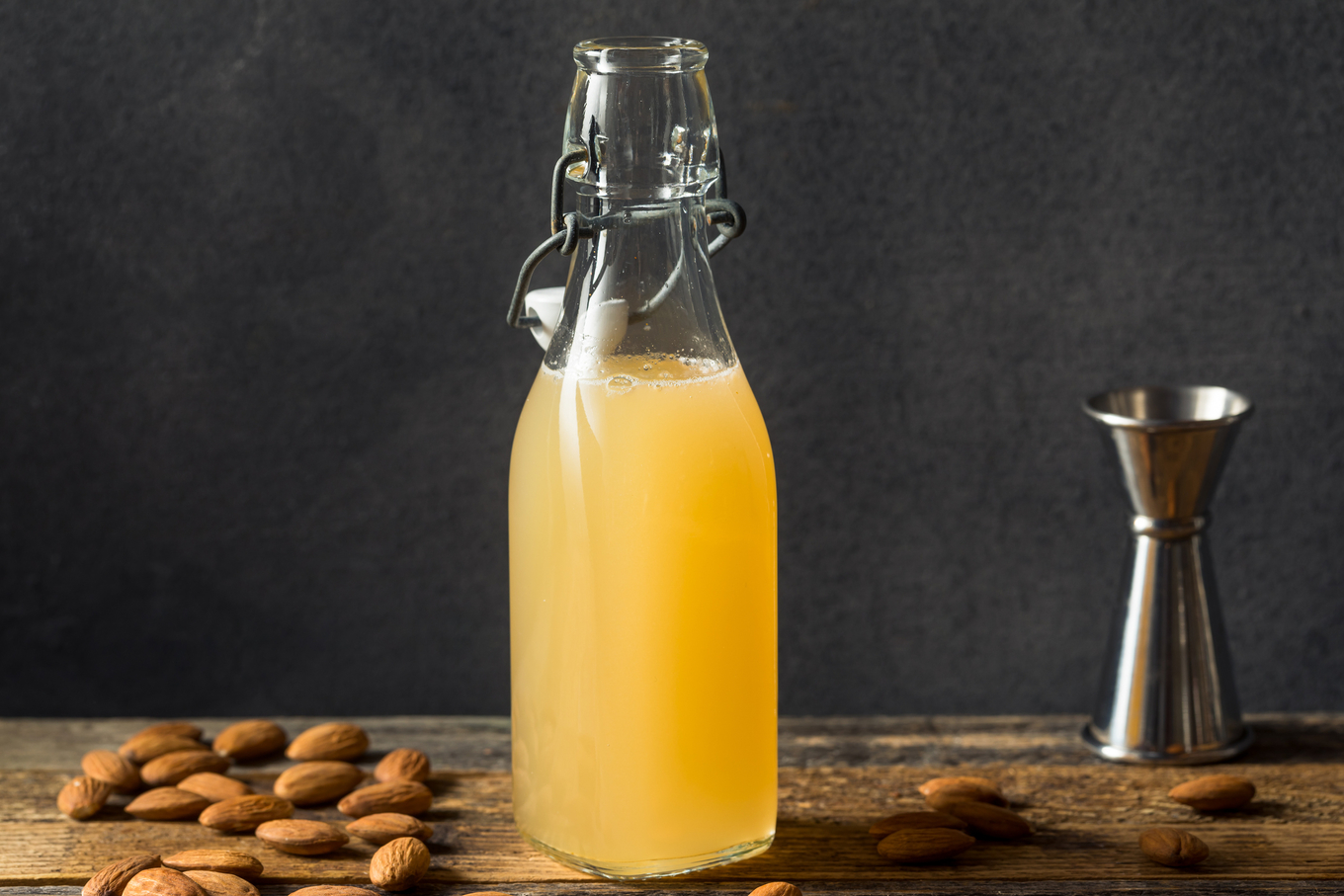 Orgeat (pronounced 'Ohr-Zsa' as in Zsa Zsa Gabor - with the 't' silent), is a syrup traditionally made from almonds, sugar and rose water or orange flower water. It is a flavoursome sweetener that adds distinct almond/marzipan and bittersweet notes to cocktails.

Historically, the recipe included a barley blend ('Orge' is French for barley), and in the past orgeat was sometimes alcoholic, but nowadays it's typically non-alcoholic (although L'Orgeat liqueur is a notable exception).

While orgeat has become conceptually tied to Tiki (a thoroughly 20th-century concept in terms of bartending culture), orgeat's use in mixed drinks dates back much further - to the late 19th century, indeed, "Professor" Jerry Thomas calls for it in his 1862 The Bar-tender's Guide, and Bon Vivant's Companion and interestingly gives recipes for both alcoholic liqueur and non-alcoholic syrup orgeats (see below).

The first mention by Thomas for orgeat is in an Orgeat Punch - a combination of non-alcoholic orgeat syrup, brandy, lemon juice and a dash of port.

19. Orgeat Punch.
(Use large bar glass.)
1½ table-spoon of orgeat syrup.
1½ wine-glass of brandy.
Shake well, ornament with berries in season, and dush port wine on top.
Place the straw, as repeated in cut of julep.

Then follows three more cocktails, all also calling for orgeat syrup rather than liqueur:
- Japanese Cocktail with "orgeat syrup"
- Crimean Cup, à la Marmora with "syrup of orgeat"
- Orgeat Lemonade with "orgeat syrup"
Handily, Thomas also gives three orgeat recipes, one with alcohol and the other two with non-alcoholic syrups.

271. Liqueur d'Orgeat. (Spirit of Orgeat.)
3lbs. of sweet almonds.
1 lb. of bitter almonds.
1 gallon of boiling water; let them stand together till nearly cold; take the skins off by pressing with the fingers; grind, and macerate for 10 days, with 3 gallons of alcohol, 95 per cent. (see No.5); strain and press; add ½ gallon of orange-flower water and 24 lbs. of sugar, dissolved in 5 gallons of water; filter.

353. Sirop d'Orgeat. (Orgeat Syrup.)
10 lbs. of sweet almonds.
4 lb. of bitter almonds.
Cover them with boiling water; let them stand till nearly cold, and peel them by pressing through your fingers; beat them in a stone or brass mortar to a very fine paste with some sugar, adding water slowly; press through a linen cloth, so as to get 5 gallons of liquid resembling rich milk, dissolve in this liquid 80 lbs. of sugar; boil up once, and add 1 pint of orange-flower water; then strain.

424. Orgeat (or Almond) Syrup.)
2 lbs. of sweet almonds.
3½ ounces of bitters almond.
3 pints of fresh water.
6 or 6½ lbs. Of sugar
Take your almonds (sweet and bitter) and
Drop them into boiling water. This blanches them, and they are easily skinned. Having peeled them, drop them into cold water, in which was them; when ready put them into clean mortar (one of marble is better than bronze), and mash them; next, squeeze in the juice of two lemons, or add a little acid, and, as you pound the almonds, pour part of a pint of clean water into the mortar; mash thoroughly, until the mixture looks like thick milk, and no pieces of almonds are left; then add another pint of the spring water. Now squeeze the white mash through a hair-cloth, or other good strainer; a common plan is to have a large strainer held by two persons; as they twist the milk may be caught in a clean basin; whatever of the almonds left in the cloth put back into the mortar, and mash it over again, adding a little of the spring water; then strain it, and mix with the former almond milk; this done mix it with your sugar (about 6 lbs) which must first, however, be clarified and boiled to a "crack" (see No.17); whilst adding the almond milk let the pan of hot sugar be off the fire; when mixed give another boil up; them remove the pan from the fire, and stir the syrup until cold;* pour in a small portion of the tincture of orange flowers, or the least drop of essence of neroiy, and pass the mixture again through a cloth; give the bottles an occasional shake for a few days afterward; it will keep the syrup from parting.

Despite the above 19th-century reference, it is Trader Vic and his contemporaries who have become synonymous with orgeat and its use in cocktails including the Fog Cutter, Scorpion, Mai Tai, Menehune Juice and London Sour. 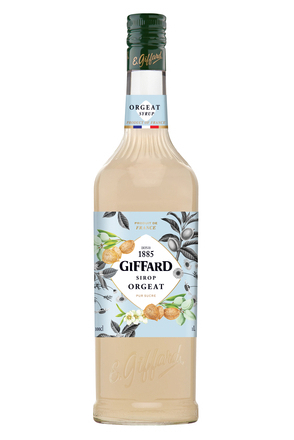 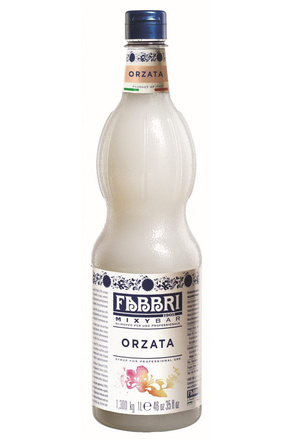 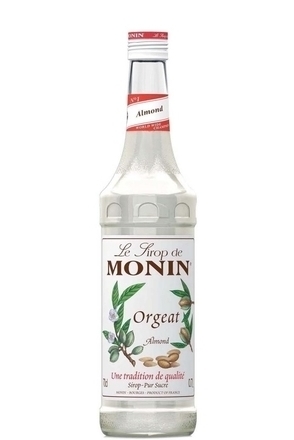 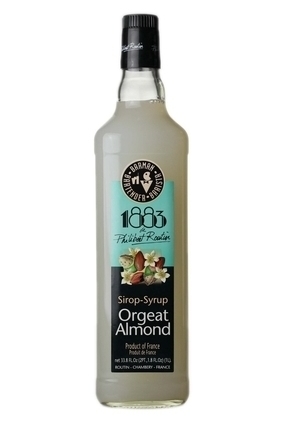 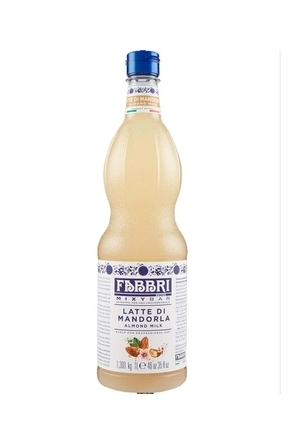 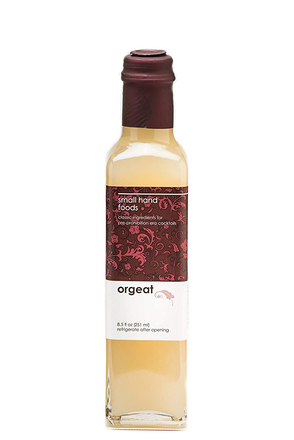 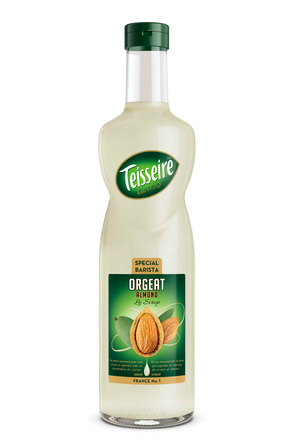 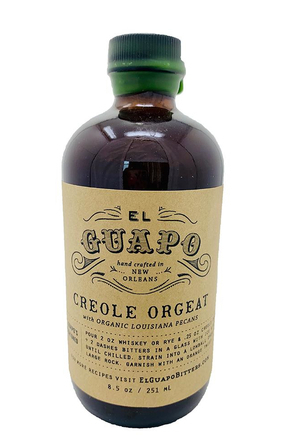