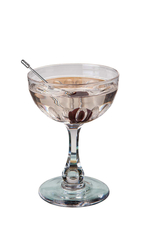 There is only one U.S. president ever to have resigned from office - Richard Nixon. It all began in June 1972, when five men were caught at 2.30 am trying to bug the offices of the Democrat National Committee in Watergate, after breaking into the building.

On this day in 1973, The Post broke the story that Dean had told investigators that Nixon had discussed covering up the break-in with him "at least 35 times." But Tricky Dicky clung on, protesting his innocence, for over a year. We're marking the occasion with a Waters of Chaos, one of our own creations based on genever, Chartreuse and overproof rum.

Although not everything is rosy in the garden with countries still squabbling over everything from who has first dibs on Alexander the Great, Croatia, a war zone 20 years ago, is now a holiday destination. So, we're toasting today with the national drink of many of these countries: slivovitz, in the form of a Plum Cocktail. Cheers!