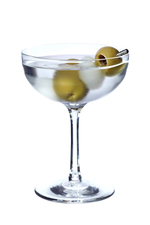 Our recommended recipe today is a synthesis of two executions: the Gibson, with two cocktail onions, and the classic Dry Martini, with gin and olives. On such a special day we suggest combining both, and enjoying a Gin Salad Dry Martini, with both olives and onion.

Then sit down and ponder just how complicated the simplest of cocktails has become. There are thousands of different options to choose from and some very passionate arguments between what's right and what's wrong.

I explore each of these five variables in How To Make A Dry Martini. Or you may prefer Dick Bradell's take on the Dry Martini.

The "dean of correspondents", the ultimate old soak, a connoisseur who preserved some of the great pre-Prohibition cocktails in his Old Waldorf-Astoria Bar Book, Albert Stevens Crockett was born this day in 1873.

Although, sadly, the gentleman died a stripling, aged only 96. Described by HL Mencken as "a high authority on bar life in America", Crockett knew everyone who was anyone in his New York, from millionaires to bartenders. He preserved recipes and etymologies for a stack of cocktails, from the Gibson to the Bronx and Bobby Burns, as well as lesser-known gems like the Ampersand and the Tip-Top.

A good 70 years before the profession of cocktail historian existed, Crockett was delving into minutiae such as the first name of the Colonel who created the Rickey, and chatting to Johnny Solon about the Bronx. We are toasting him with one of the best recipes he preserved, a Chanticleer Cocktail.

Juneteenth is obviously a contraction of 'June' and 'nineteenth' and marks the anniversary of the 19th June 1865 announcement by Union Army general Gordon Granger, proclaiming freedom from slavery in Texas. Celebrations of this anniversary started in 1866, initially with church-led community gatherings in Texas. Over the decades this spread across the American South becoming more nationally recognised in the 1970s. Texas became the first state to adopt Juneteenth as an official state holiday in 1980 and the vast majority of other US states now also recognise its importance.

So, we'll be celebrating Juneteenth with a Burning Bright in solidarity and celebration of emancipation and equal rights.