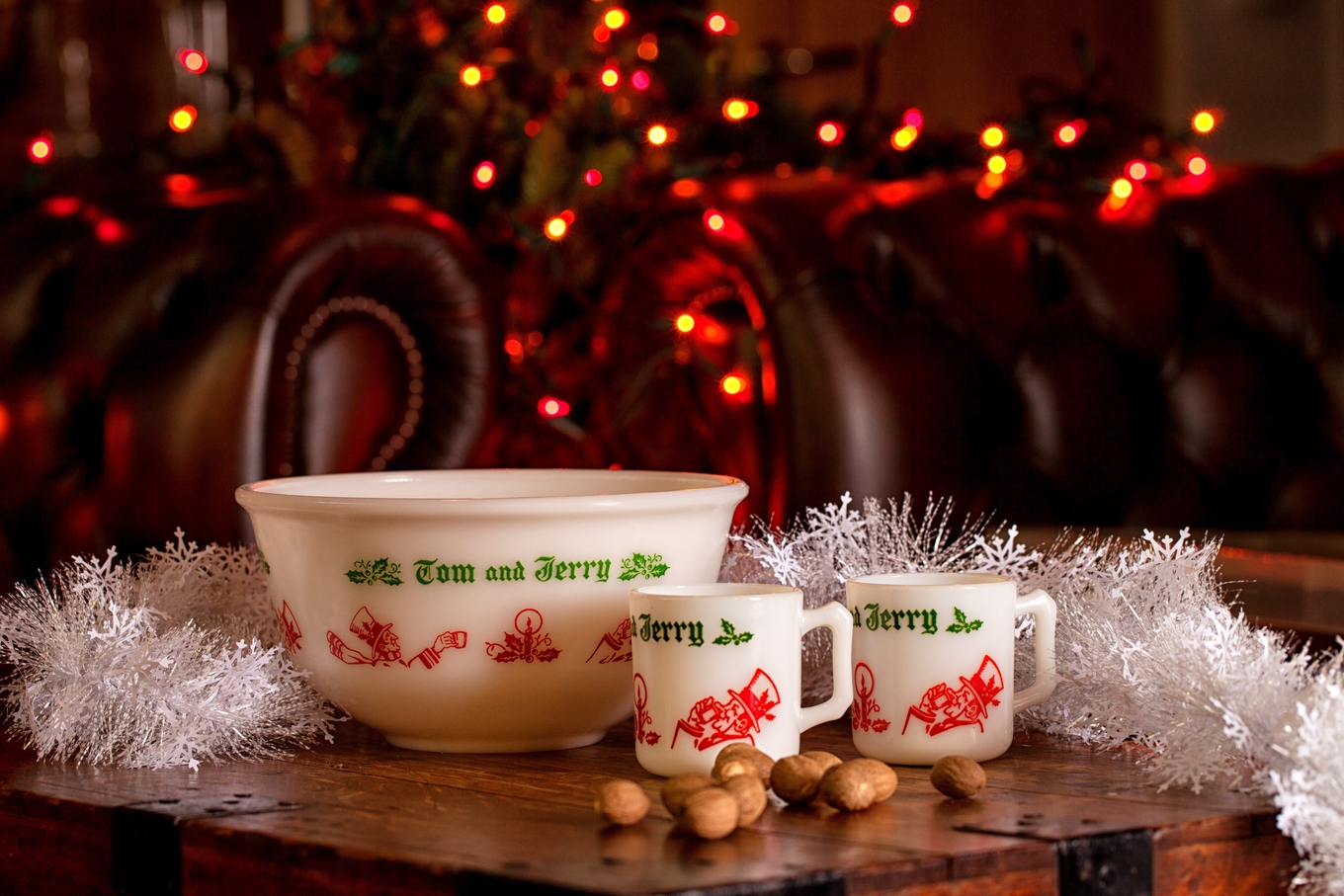 Once a wintertime staple served in taverns and saloons across America, the Tom & Jerry cocktail/punch was relegated to obscurity until recent years when cocktail resurgence and the drinks connections to Jerry Thomas assured its resurrection - particularly as a drink served over the Christmas period.

One of the reasons for the decline of this cocktails could be the perceived faff involved in its production - especially the 'Tom & Jerry batter' base. However, it's easy to make and uses everyday household and easy to obtain ingredients. Our Tom & Jerry recipe has six easy to follow steps to make enough to serve anything from 6 to 48 people.

Due to his own claims of being this drink's inventor, the Tom & Jerry was for many years credited to Jerry Thomas at the Planter's House Hotel in St Louis. However, the Tom & Jerry cocktail's real origins predate the flamboyant 'Professor'.

Although there are earlier written references, the cocktail appeared in Jerry Thomas' first 1862 edition of How To Mix Drinks as follows:

Tom and Jerry.
(Use punch-bowl for the mixture.)
5 lbs. sugar.
12 eggs.
½ small glass of Jamaican rum.
1½ teaspoonful of ground cinnamon.
½ teaspoon of ground cloves.
½ teaspoon of ground allspice.
Beat the whites of the eggs to a stiff froth, and the yolks until they are thin as water, then mix together and add the spice and rum, thicken with sugar until the mixture attains the consistence of a light batter.
To deal out Tom and Jerry to customers:
Take a small bar glass, and to one table-spoonful of the above mixture, add one wine-glass of brandy, and fill the glass with boiling water, grate a little nutmeg on top.
Adepts at the bar, in serving Tom and Jerry, sometimes adopt a mixture of ½ brandy, ¼ Jamaican rum, and ¼ Santa Cruz rum, instead of brandy plain. This compound is usually mixed and kept in a bottle, and a wine-glassful is used in each tumbler of Tom and Jerry.
N. B. – A tea-spoonful of cream of tartar, or about as much carbonate of soda as you can get on a dime, will prevent the sugar from settling to the bottom of the mixture.
This drink is sometimes called Copenhagen, and sometimes Jerry Thomas.

Jerry Thomas became synonymous with the Tom and Jerry cocktail. Indeed, in his own recipe, he says the drink sometimes takes his own name. And during his career he repeatedly claimed the drink as his own, including an often quoted 1880 interview by a reporter named Alan Dale, an interview repeated almost word for word in Thomas' New York Times obituary, which appears as follows courtesy of David Wondrich's 2015 Imbibe!

One day in... 1847 a gentleman asked me to give him an egg beaten up in sugar. I prepared the article, and then... I thought to myself, 'How beautiful the egg and sugar would be with brandy to it!' I ran to the gentleman and, says I, 'If you'll only bear with me for five minutes I'll fix you up a drink that'll do your heartstrings good.' He wasn't at all averse to having the condition of his heartstrings improved, so back I went, mixed the egg and sugar, which I had beaten up into a kind of batter, with some brandy, then I poured in some hot water and stirred vigorously. The drink realised my expectations. It was the one thing I'd been dreaming of for months... I named the drink after myself, kinder familiarly: I had two small white mice in those days, one of them I called Tom and the other Jerry, so I combined the abbreviations in the drink, as Jeremiah P. Thomas would have sounded rather heavy, and that wouldn't have done for a beverage.

Despite this and many other claims, Jerry Thomas most definitely did not create the Tom & Jerry. Again (as is so often the case in matters of cocktail history) we turn to David Wondrich and his excellent Imbibe! where he reprints an article first published 20th March 1827 in the Salem Gazette (Massachusetts). Appearing three years prior to Jerry Thomas' birth, this damning evidence clearly references the Tom and Jerry, both by name and ingredients.

At the police court in Boston, last week, a lad about 13 years of age was tried for stealing a watch, and acquitted. In the course of the trial, it appeared that the prosecutor [the plaintiff] sold to the lad, under the name of "Tom and Jerry," a composition of saleratus [baking soda], eggs, sugar, nutmeg, ginger, allspice and rum. A female witness testified that the boy... appeared to be perfectly deranged, probably in consequence of the 'hell-broth' that he had been drinking.

The above, and other pre-Jerry Thomas references to the Tom & Jerry uncovered by David Wondrich suggest the drink originated in America's New England area, although its true inventor remains unknown. Fact is, if it were not for Jerry Thomas championing the drink, the Tom & Jerry would probably also be unknown.