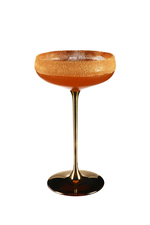 On this day in 1876, Alexander Graham Bell made a phone call - the world's first. His imaginative words? "Mr. Watson, come here! I want to see you."

Scottish born, but US based, Bell had overcome tuberculosis to become one of the great inventors of all time. It is possible, however, that his first phone call was an accident: he had knocked over some acid, and was yelling for help. All the same, Watson, in the next door room, heard Bell's voice coming down the wire - and popped next door to answer it. Seven months later, Bell would give Watson a bell when he was a full two miles away.

And in 1915, Bell would ring Watson from New York, repeating his immortal words: "Mr. Watson, come here. I want you." Watson, in San Francisco, replied, "It will take me five days to get there now." In honour of Bell, and that first bell he made, we are drinking a Bella Donna Daiquiri.

It's also the day that rings were discovered round Uranus

Did you know that the rings around Uranus were only discovered on 10 March 1977, despite the planet first being sighted in 1781?!

The planet wasn't always called Uranus. When Sir William Herschel first discovered it, he gave it the name: George's Star, after the King of England at the time - George III. When Herschel died though, astronomers changed its name to Uranus, because the previous planted to have been discovered was Saturn - and in Greek mythology, Saturn was the son of Uranus.

The planet is seventh from the sun, and the farthest place from the earth that you can see with the naked eye. It has a moon that's called Florescent Cheerio, and it's damned cold over there...though may have trillions of diamonds under its surface, which would make a visit more tempting!

Mix an Onion Ring Martini tonight, and dream of all the exciting possibilities of space travel...

Today's also the anniversary of the Louisiana Purchase

On 10 March 1804, the United States of America officially doubled in size, with a ceremony in St. Louis that marked its ownership of the French territory, Louisiana. Napoleon had sold it off to raise money to invade England - not one of his best decisions.

The U.S. had bought the land from the French for roughly 3 cents an acre, picking up all of Arkansas, Missouri, Iowa, Oklahoma, Kansas and Nebraska, swathes of other states and, of course, most of Louisiana, including New Orleans.

Much of the territory, however, remained to be explored - and a lot of it was still, in reality, owned by its original owners, the Indigenous Americans who had used the land since time immemorial.

If New Orleans and Louisiana were still French, the world would be a very different place. So we're celebrating this anniversary with a De La Louisiane, made to a recipe we discovered in Stanley Clisby Arthur's Famous New Orleans Drinks and How to Mix Them.