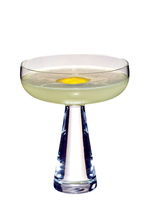 The paper was pretty different to the weighty tomes of today - The Daily Courant was just a single page divided up into two columns. No adverts, no celeb gossip, no comment but just pure, unadulterated news!

Another big difference between Mallet's paper and today's press was his insistence on being objective. Mallet's aim was to publish just foreign news without any personal commentary - he worked on the basis that people would have "sense enough to make reflections for themselves."

How very refreshingly different from the tabloid "yellow journalism" of today. Rather than feeling sour that the The Daily Courant closed and the yellow press won, why not mix up a Yellow Belly Martini, with limoncello, lemon vodka and lemon juice?

But what of the White Hart pub, the place where it all started? The Mirror hacks that drank there before the newspaper industry moved away from Fleet Street knew it as the "Stab in the Back", abbreviated to "The Stab", due to its reputation for being where the darkest journalistic office politics were discussed.

Situated at 3 New Fetter Lane, Fleet Street, EC4A 3BN, sadly this former Courage pub met a similar demise to The Daily Courant and was demolished circa 2001. We're remembering the once notorious journalist pubs of Fleet Street with a Journalist or two.

Lithuanians had lived under the rule of the Russian Empire for over a century until the Act of Independence was signed on 16th February 1918. World War II meant this independence was short-lived as the Soviet Union re-occupied under the terms of the Molotov–Ribbentrop Pact. After the defeat of Nazi Germany and the cessation of hostilities, the Soviet Union's occupation of Lithuania continued.

On 11th March 1990, Lithuania finally declared it was an independent nation following five decades of occupation by the Soviet Union. We're celebrating their independence today with an aptly named Lithuanian Daiquiri.

It's also the anniversary of the Japanese Tsunami

This day in 2011, a 9.0 magnitude earthquake, the most powerful since records began, struck north-east Japan. A double tsunami, reaching as high as 50 feet, swept 10km or more inland, knocking over trees and houses, swirling cars around like so many rubber ducks and inundating the Fukushima nuclear power plant.

The disaster killed more than 20,000 people, and the Fukushima nuclear accident ties with Chernobyl as the worst nuclear accident in history: both Japan and the global nuclear industry are still struggling with the consequences.

Shocking as this disaster is, the fact that more people did not die is a tribute to Japan's earthquake preparation and the bravery of the Japanese people, in particular the workers who entered the radiation-filled plant to try and secure it.

We are raising a glass in their honour - a Japanese Maple, based on one of Japan's many fine whiskies

It's also the anniversary of The Great Sheffield Flood

This day in 1864, the greatest manmade flood in British history hit the UK, killing more than 200 people and washing away hundreds of buildings.

Just before midnight on 11th March 1864, the brand new Dyke Dam collapsed, unleashing over two billion litres of water onto the Loxley Valley. A wall of water as high as a three-storey building roared down the valley with a noise like "the whistles of a thousand steam engines", killing victims aged from two days to 87 years.

Many more would have died, however, had it not been for workers on the project. They had spotted a crack on the dam earlier that evening and sent for help. So, when the dam burst just as engineers were battling to drain it, many villagers were prepared for disaster.

The Dyke Dam disaster played a big part in making dams safer. In the hope that this will long continue, we're enjoying an I B Damm'd, fittingly based on Dutch genever (a nation of Dam builders) along with elderflower, apple and peach.

... comment(s) for Britain's first daily newspaper was published this day