OK, it's your birthday 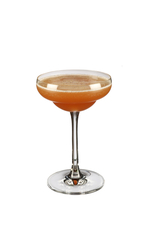 Indeed, today is OK's birthday. The initials "O.K." were first published on 23rd March 23 1839 in The Boston Morning Post as an abbreviation for 'oll korrect,' common American slang for "all correct" at the time.

Just as today's social media engaged teenagers might use "kewl" rather than a naff word like "cool", the 1830's in-crowd intentionally misspelt words and then abbreviate them. OK is simply one example that has endured to not only enter American vernacular but internationally, even beyond English speakers.

OK is merely "adequate", "acceptable", even a tad "mediocre" but for today's cocktail we sought something more positive, such as an Absolutely Fabulous even a More Supreme Daiquiri

Akira Kurosawa, probably Japan's most influential film director, and the man who brought his country's cinema to a global audience, was born in Tokyo on this day in 1910.

In a career lasting almost 60 years, he made more than 30 films including the epic Seven Samurai and Ran, his adaptation of Shakespeare's King Lear. A perfectionist and former painter who both directed and edited his movies, Kurosawa's work inspired George Lucas's vision of the original Star Wars, as well as classic Westerns like The Magnificent Seven and A Fistful of Dollars.

Let's remember his legacy with a cocktail based on another great Japanese export: the Japanese Maple, an outstanding Sour-style concoction with Japanese whisky.

The anniversary of the discovery of Cold Fusion - allegedly

On 23rd March 1989, two scientists held a press conference. They'd produced energy by fusing atoms at room temperature - a reaction that produced as much as double the amount of energy required to run it.

Before, atoms had only been fused at temperatures around the million-degree mark - so Stanley Pons and Martin Fleischmann's discovery promised a future full of clean, affordable energy. A few more labs seemed to replicate their experiments; no specialists could. And then... Nothing. It turned out there was no hard evidence that energy had been produced, and that they'd most likely misread their results.

Today, some scientists still explore cold fusion - although it's been rebranded as Low Energy Nuclear Reactions, and a man named Andrea Rossi has claimed for years that he's bringing the technology to market. But, for the moment, we're stuck with the old, environmentally hostile forms of energy we used before - which is, like our last cocktail for today is Cold Comfort.