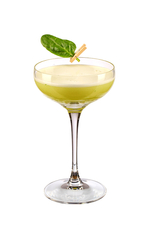 Popeye the Sailor Man has derived his superhero strength from eating spinach since 1932. He's onto something! The health benefits of spinach, whether fresh, frozen, or canned, and eaten raw or cooked, are undeniable.

Spinach is one of the best sources of iron and is loaded with calcium, folic acid, fibre, protein, calcium, and vitamins A, C, and K. Not to mention cancer-fighting antioxidants. It's also believed to help improve cardiovascular and gastrointestinal health.

From scrambled eggs to curry, spinach is as versatile a vegetable as the potato and equally at home in a salad as it is on a pizza. Yup, it's also a cocktail ingredient so today mix up a Popeye Sour

A few days before Ludwig van Beethoven died, on this day in 1827, a case of wine arrived from his publisher, prompting the great man's last recorded words: "Pity, pity – too late!"

A musical genius, Beethoven started his career as a child piano prodigy, promoted by his overbearing father, and went on to overcome deafness and produce some of the most enduring classical music ever.

If you've heard the ring-tone tinkle of Für Elise, the epic da-da-da-DUM of his Fifth Symphony, or the rippling tones of the Moonlight Sonata, you've been influenced by the man.

Pay a tribute to his memory not with a sonata but with a Moonlight Cocktail, a delightfully dry blend that includes kirschwasser from his native Germany.

It's also the anniversary of women on the stock exchange

After years of campaigning by women brave enough to work in finance in the 1960s, the London Stock Exchange finally admitted its first "lady" members on this day in 1973, after almost two centuries as a club for British-born men.

Though of course the fragile creatures weren't allowed to actually trade on the floor. That would have been far, far too much for them, since in those days trading meant open outcry - AKA yelling at ticker boards on a 23,000 square foot floor - with computers not introduced until 1986. It took a generation more before the London Stock Exchange had its first female chief executive, Clara Furse, who ran the shop from 2001 to 2009.

Would those first few "ladies" have appreciated Ms Furse? You betcha. And so we are toasting them with a Grand White Lady.

It's also the anniversary of the UK driving test

On this day in 1934, the Road Traffic Act passed into law - and driving tests and speed limits were introduced to a skeptical public. Tests would become compulsory in June 1935, but anyone who'd had a license before April 1934 could carry on as they were.

This was part of an ongoing effort to cut down on deaths on the road: over 7,000 people were killed and over 200,000 injured in 1933, although there were only 2 million cars on UK roads.

Alongside the driving test came new speed limits - 30mph in built-up areas - and the first pedestrian crossings. Drivers had to practice the 3-point turn, the emergency stop, the hill start, hand signals, and reversing - and learn their Highway Code, including all ten road signs.

Did it work? Yes. Today there are over 32 million vehicles on the road, but deaths are a quarter of what they were and injuries are about the same. We're marking the anniversary with a Pear & Cardamom Sidecar, after which, unlike the folk of the 1930s, we definitely won't be driving.