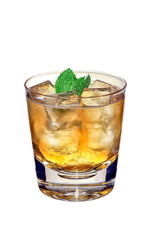 One of the first rock stars to form the 27 Club, Janis Joplin died aged only 27 soon after Brian Jones and Jimi Hendrix. Later entrants include Jim Morrison, Kurt Cobain and, most recently, Amy Winehouse.

Hard living, hard partying, tormented, and a painter as well as a singer, Joplin was born in Texas on this day in 1943.

Joplin's performances at Monterey, Woodstock and aboard the Festival Express train made her a counter-culture icon, while her take on "Piece of My Heart" still makes the lists of all time greatest rock songs. She was immortalised by lover Leonard Cohen who wrote Chelsea Hotel for her.

Janis' favourite legal high was Southern Comfort, which she would often swig from a bottle live on stage. So we are toasting her with a Southern Tea , a drink that combines that sweet Southern liqueur with Earl Grey tea. As a girl from the South, we think she might have liked a nice cooling Southern Mint Cobbler which adds peach, lemon juice and mint to her preferred spirit.

"Once upon a midnight dreary, while I pondered weak and weary" ...so starts one of Poe's cheerier poems, The Raven. Abandoned by his father, orphaned at a young age when his mother died, then widowed when his wife (who was also his 15 year old cousin) died of tuberculosis, it was no wonder that this Massachusetts-born poet was so gloomy.

His poetry lives on though, and is loved and respected worldwide. Each year (with 2010 being the first exception since 1949) an anonymous figure called the Poe Toaster visits the poet's grave to honour him with a glass of cognac and lay three red roses on his grave. Why not pay your respects from where you are though, and enjoy your cognac in the style of a Three Hundred Poems cocktail while raising a glass to the American poet.

It's also the day John Wilkes became an outlaw

On this day in 1764, the journalist, politician, freedom campaigner, libertine and Hell Club member John Wilkes became an outlaw in the UK. His crime? Publishing a pornographic poem, which was also arguably libellous, against the deliciously named courtesan Fanny Murray, mistress of the Earl of Sandwich - the chap who supposedly created the sandwich.

The Julian Assange of his era, Wilkes skipped to Paris ahead of his trial, which was conducted in his absence, then ran out of money, and had to return to London and jail.

He would recover impressively. Wilkes became Lord Mayor of London, was popular enough in America to have two counties and several streets named after him, and remained a campaigner for religious and social freedom until he died, having fathered at least five illegitimate children.

John Wilkes, we salute you! And we're toasting your originality with a Scofflaw, created at Harry's American Bar to honour drinkers who breached Prohibition.