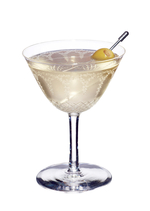 Ever wondered why the British 50p piece was such a weird shape? Well, when the Royal Mint introduced it, on this day in 1969, the UK was in the run-up to decimalisation. The fifty pence piece was intended to directly replace the ten-shilling note.

Its bizarre, seven-sided, shape was designed to prevent confusion with two competing, round coins: the new ten pence piece, and the retiring half-crown. It didn't work, of course. But at least they tried. In 1997, the coin shrank, a reflection of its shrinking value. All of which makes today an excellent excuse to enjoy a Fifty-Fifty. This compelling "half-'n'-half" Martini is best with an olive, not a twist.

Anniversary of English defeat by the French

Duke William II of Normandy had spent nine months building a fleet large enough to cross the Channel and invade England, and it was on this day in 1066 that he met with the English army under the Anglo-Saxon King Harold II about seven miles in from the English coast, close to the present-day town of Battle in East Sussex [near our office].

It was a decisive Norman victory, which sealed William's conquest of England. Estimates suggest that 2,000 invaders died along with about twice that number of Englishmen. William is said to have founded a monastery on the site of the battle, with the high altar of the abbey church at the spot where King Harold died, so today we will be drinking an Abbey Martini.

At 8 in the morning, this day in 1913, a huge explosion shook the little town of Senghenydd in Wales, causing utter panic.

The local coal mine was the biggest employer in the area, and more than 900 men, most of them local, were working underground at the time, digging "black diamonds" to power the British Navy's steamships. A disaster twelve years before had killed almost 100 men. This one would be worse, as waves of fire and toxic gases swept through the mines, and rescuers were blocked by roof collapses and burning coal dust. By the time rescue attempts were abandoned, three weeks later, 440 men and boys were tragically dead.

Exactly 100 years after the disaster to the day, the National Mining Memorial opened on the site of the Universal Colliery, Sengenydd, to commemorate the many Welshmen who lost their lives in this and other mining disasters. We're marking the anniversary fittingly with a Black Diamond.

Bartenders can be prone to a little excess. But a century ago today, John Schrank pushed the boundaries of bartending excess when on this day in 1912 he tried to kill the ex-president Theodore Roosevelt.

Schrank worked for his uncle, a New York tavern owner before becoming a drifting bible basher. The murder attempt was apparently motivated by a dream, in which William McKinley, the president whose assassination first brought Roosevelt to power, asked him to avenge his death and pointed to a picture of Roosevelt. Schrank's bullet did indeed hit Roosevelt, but the politician was protected firstly by a steel spectacles case and secondly by a 50-page copy of his speech. Roosevelt would carry the bullet inside him until he died, and Schrank would spend the rest of his life in an insane asylum.

Today we are drinking a Bartender's Martini, a much better response to any political issue than assassination.