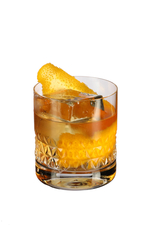 It was created in 1923, narrowly escaped being called Facts, and made its mark thanks to an innovative multimedia campaign that covered both radio and movie theatres, not to mention such cutting edge topics as "Aeronautics: A Successful Helicopter" and "Aeronautics: A Dreadnaught".

Time continues to sell today because it covers world news in a light, accessible way. Its list of the world's most influential people and its picks for Person of the Year - including, over the decades, Hitler, Obama and Mark Zuckerberg - remain news events in their own right.

We are wishing Time many happy returns, with a Ragtime, one of our favourite rye cocktails.

On this day in 1982, the Queen opened a brand new arts centre in the City of London, covering a huge site that had been devastated by Nazi bombing during the Blitz, at a ceremony attended by more than 3,000 people.

The iconic estate which surrounds it had been completed a few years earlier. And, whether you love it or loathe it, you certainly can't ignore it. The Barbican is now a Grade II listed building as one of London's first examples of Brutalist architecture - although Londoners voted it the city's ugliest building in 2003. The name comes from medieval Latin and means "an outer fortification of a city or castle", and is probably a homage to the area's history as Cripplegate, one of the towered gates in the original city wall.

Today we are raising a glass to this London icon, with a London Calling, an elegant sweet Martini.

The US National Anthem's Birthday

On this day back in 1931, President Hoover signed a law, adopting The Star-Spangled Banner as the official national anthem of the United States.

The lyrics were written in 1814 when a young lawyer called Francis Scott Key watched the Americans fight off the British attack of Baltimore. Quite amusingly, the lyrics were then set to the tune of a popular British drinking song (the Anacreontic Song).

The anthem has a range of one and a half octaves, making it notoriously difficult to sing. Hendrix took it on at Woodstock 1969 though, doing a controversial, yet brilliant rendition. Marvin Gaye did a wonderful, soul version at the 1983 NBA All-Star Game, and more recently Christina Aguilera took on the tune at the Super Bowl, though it wasn't a very successful performance - especially as she forgot some of the words!

Although based on Italian ingredients, we're using the anniversary of the anthem as an excuse to make an Americano but for a more all-American offering we suggest a American Trilogy.

Flight 981 Crashed On This Day

This day in 1974, Turkish Airlines Flight 981 crashed in a forest near Paris, killing more than 300 people. It was, at the time, the deadliest aviation accident in history.

The rear cargo hatch of the plane blew open, decompressing the cabin and blasting a chunk of the floor, with six passengers still in their seats, out of the plane. The pilots struggled to control the aircraft but they didn't stand a chance: everybody died.

The problem was, it emerged, a design flaw. Shockingly, this had been identified in ground testing by one of the companies that helped to build the aircraft. And, after a near-miss in midair, one engineer was worried enough to send a memo to his boss, insisting that the problem be fixed. But it didn't happen - most likely for cost reasons.

Today, the crash is taught in engineering ethics to show how engineers should do the right thing - and has helped to make not only aviation but general engineering much, much safer. We're marking the occasion with a Last Flight.

... comment(s) for The anniversary of the inaugural Time magazine