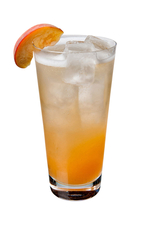 No childhood would be complete without the fairy stories of Hans Christian Andersen, born today in 1805 in Odense, Denmark.

Creator of The Little Match Girl, The Little Mermaid and The Princess and the Pea, he also wrote The Snow Queen, which was the inspiration for Disney's smash hit Frozen. Andersen based his story of The Ugly Duckling on his own experiences of growing up tall, gawky and just that little bit different.

While we remember him for his fairy tales, he wrote poems, plays, novels and travelogues on the side. Let's toast Denmark's most famous son with a Baltic Spring Punch, a floral creation named for the sea by which his country sits, along with, of course, Copenhagen's iconic Little Mermaid statue.

It's the anniversary of the Falklands War

Hopefully, Stanley is rather calmer today than it was this day in 1982, when Argentine forces invaded the Falklands Islands, terrifying a couple of thousand island folk, many times that number of sheep, and innumerable seals and penguins.

For yes, as the anniversary rolls around, we Brits and the good folk of South America are still at loggerheads over the future of the Falklands, or Las Malvinas as people on the other side of the argument call them.

In the hope that the nationality of the Falklands will always remain the choice of the people who live there we are drinking an Islander Cocktail.

Use the force, Luke! One of the best-known British actors of the twentieth century, and a unique talent, Alec Guinness was born this day in 1914. And is almost certainly spinning in his grave even now at the thought that the role he is best known for is Obi-Wan Kenobi in the original Star Wars. But there was more to him than that.

He won an Oscar for his role in The Bridge on the River Kwai - and was nominated for a screenwriting Oscar, as well. He appeared in Lawrence of Arabia, Doctor Zhivago and A Passage to India - and taught an 8-year-old Emma Thompson the facts of life.

A complex man, scarred by a difficult childhood, Guinness wasn't a flawless human. But his acting was, and is, amazing - and so we're toasting him with a Stout Fellow, created by Matthew Coates using the dark nectar that bears his name.

Emmeline Pankhurst was sentenced this day

On this day in 1913, the suffragette leader, Emmeline Pankhurst, was sentenced to three years penal servitude for inciting her followers to bomb a house being built for the Prime Minister.

The judge remarked on Mrs P's "shameful lack of decorum" as she took to the stand with some impressive feminist oratory that even moved the all-male jury to ask the judge to impose a light sentence on her. The bombing was part of a campaign of non-lethal direct action, from attacking politicians to breaking windows and slashing paintings, in pursuit of votes for women.

In fact, women would not get the vote in Britain until they'd proved their worth by doing men's jobs in factories while the chaps got killed in the trenches during World War I. But at least Mrs Pankhurst lived to see it. And we're toasting this brave rabble-rouser with an aptly named Bitter Lady.