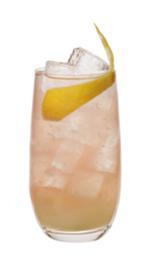 America boasts over 1,200 national days celebrating all manner of things... and as the name suggests, this one remembers dearly departed socks and their surviving twins.

Pull yourself together - even if your socks are separated forever - and unless the remaining sock can be put to good use protecting the head of a golf club or such like, then throw it away and move on with a new pair.

As celebration days go, Lost Sock Memorial Day is something of a slow news day but does give us the excuse to suggest some cocktail puns with which to celebrate, or perhaps we should say mourn, your missing socks: Lone Ranger; Perfectly Paired; Tanglefoot; Pussyfoot (for a temperance option); or a Nice Pear

Our American friends have also declared today "National Moscato Day" - and why not?

Despite this being an American "National Day", Moscato is an Italian wine from the Piedmont region. Made from the Muscat grape, Moscato is often enjoyed as an aperitif as it's slightly sweet, low in alcohol and very quaffable.

We do love a glass of Moscato, but why settle for mere wine when you can have a wine based cocktail: Heard It Through The Grapewine.

In the presence of the brilliant General Georgy Zhukov, at 21:20 local time on the 8th May 1945, the Soviet Union accepted the surrender of the German army. Moscow is an hour ahead of Berlin, so confirmation of the signing came late in the night. Hence, while most of Europe celebrate the 8th May as Victory in Europe Day, in Russia it is celebrated on the 9th.

Known as The German Instrument of Surrender, this definitive legal document followed an earlier version signed in a ceremony in Reims, France in the early hours of 7th May 1945. (It's worth noting that Reims is the unofficial capital of the Champagne so a very appropriate place to celebrate VE Day.)

Although arguably they began the war on the wrong side, the Russians call World War II the Great Patriotic War. Between 25 and 30 million Soviet citizens tragically died over the course of the war, and this anniversary understandably remains very important to many Russians.

In Moscow, folk usually mark the day with parades, celebrations and fireworks. Not to mention, of course, a healthy (or unhealthy) consumption of vodka. So, what will we be drinking? A vodka-based and champagne-topped Russian Spring Punch of course.