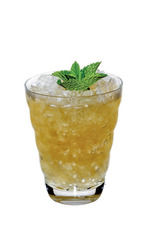 Vive la Revolution. July 14th calls for a celebration of all things French, so roll out the croissant pastry, slice the baguette and fill the cheese platter with some beaufort, reblochon, chevrotin and comté, because the French would never enjoy these dozen francophile-inspired drinks on an empty stomach.

It was July 14, 1789, that the anguished French took matters into their own hands and stormed the Bastille, kick-starting the French revolution. Whilst the day didn't exactly go to plan - rather than imprisoning a hoard of angry political prisoners the Bastille had a mere seven old men - it was still the symbol of revolt that the country needed.

France celebrates its national day with Europe's largest annual military parade on the Champs-Élysées, after which parties ensue all over the country.

One of our favourite French liqueur makers, family-owned Giffard in the Loire Valley, is famous for its Menthe Pastille and they have re-named today Pastille Day.

Given that Bastille Day falls in mid-July, Menthe Pastille does indeed make a fitting drink with which to celebrate. The liqueur was created during the heatwave of 1885 by pharmacist Emile Giffard who was inspired by the cooling effect of mint when the neighbouring hotel owner visited seeking a tonic to relieve his guests from the oppressive heat.

So we're drinking to the Giffard family and all our French friends with a cooling Stinger served on crushed ice.

And we're toasting a nation that's given us absinthe, cognac, armagnac, champagne and calvados, not to mention a host of other liqueurs such as Chartreuse with 12 Fete Nationale cocktails.

1. Sidecar (Difford's recipe)
With: Cognac, triple sec, pineau des charentes blanc and lemon juice.
We say: Perhaps the best-know of all "French" cocktails, the Sidecar was perhaps created by, and almost certainly popularised, by McGarry at London's Bucks Club. Our version shuns the splash of sugar syrup added by some in favour of the extra richness and flavour provided by pineau des charentes.

2. Champs-Élysées
With: Cognac, Green Chartreuse, lemon juice, sugar syrup and Angostura bitters.
We say: Named after the touristy Parisian boulevard, this is basically a Sidecar made with Green Chartreuse in place of triple sec.

3. French 75
With: London dry gin, lemon juice, sugar syrup and champagne.
We say: A classic and light early-evening gin sour enlivened by champagne. Legend has it that the drink was created by Harry MacElhone at his Harry's American Bar in Paris in 1925. However, so many classics, the origin of the French 75 is contested and there's also a story behind the name.

4. La Tour Eiffel
With: Cognac, triple sec, gentiane liqueur and absinthe.
We say: Named after Paris' iconic Eiffel tower, there's little in this drink that doesn't originate in France, although it was created by Gaz Regan in America after a Sazerac-fuelled trip to New Orleans.

5. Very French Martini
With: Cognac, black raspberry liqueur and pineapple juice.
We say: A riff on the iconic French Martini - - that really makes it more, well, French. How? Simply by swapping the usual vodka for a traditional French spirit - cognac.

6. Absinthe Drip
With: Absinthe, water and sugar.
We say: Absinthe fountains grace bars around the world - a reminder of both this refreshing classic café cocktail and the "Green Fairy" it is based upon.

7. Purgatory a la Française
With: Cognac, Islay whisky, Yellow Chartreuse and Punt E Mes.
We say: If this is a Frenchman's version of purgatory it really isn't so terrible. And this is a drink that can call Paris its home - we discovered it in 2010 at Curio Parlour, Paris.

8. The Mimosa
With: Champagne and orange juice.
We say: This incredibly simple cocktail, just orange juice and champagne, relies on the quality of the orange juice - freshly juiced of course. But which came first, the English Buck's Fizz or the French Mimosa?

11. Serendipity
With: Fresh mint, calvados, apple juice, sugar and champagne.
We say: This superbly refreshing cocktail by Collin Field is the signature cocktail at the Hemmingway Bar of the Paris Ritz Hotel.

12. Left Bank Martini
With: Dry gin, elderflower liqueur, Chablis and dry vermouth.
We say: Named for the Parisian St-German district on the left-bank of the Seine, this floral Martini-style cocktail was created for the launch of the elderflower liqueur which earned the nickname "Bartender's Ketchup".