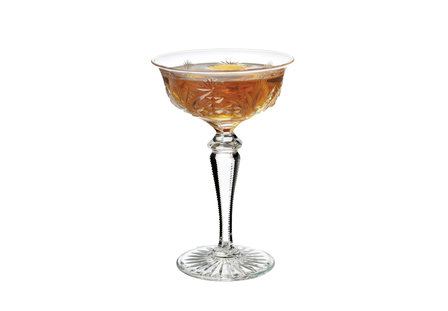 Widely touted as the drink that morphed into the Martini and then the Dry Martini, the Martinez was originally based either on Dutch jenever/genever or old tom gin. While the Martinez is still made with both of these juniper spirits, due to its domination, for decades it was usually made with London Dry Gin.

Almost every experienced bartender has a slightly different Martinez formula, but along with the juniper spirit base, the recipe broadly calls for sweet vermouth, dry vermouth, maraschino liqueur and/or orange curacao, and bitters.

As you'll see in 'history' below, the Martinez has been based on different styles of gin and made with both sweet and dry vermouths over the decades. I feel it works best with either genever or old tom (rather than London dry gin) and my preference is for an oude-style genever. The following four Martinez recipes are listed with my preferred recipe first and least favourite last, but they're all tasty:

Martinez - original genever
The original Martinez was almost certainly based on Dutch jenever rather than English old tom or dry gin. O. Byron's 1884 The Modern Bartender specifies "gin" and suggests a Martinez had a couple of dashes of both aromatic bitters and orange curaçao. The proportions of vermouth I've used in this recipe reflect the sales of French and Italian vermouths in America at the time.

Martinez - made with old tom gin
The Martinez may have originally been based on Dutch jenever/genever but Jerry Thomas' 1887 Bar-tenders Guide and other books over the next few decades specifically call for old tom gin.

Martinez - made with London dry gin
This Martinez is aromatic, complex and very dry. London dry has been the dominant gin style for over 100 years and so by extension was the gin most frequently used to make a Martinez. I've ignored a similar fashion towards dry vermouth in such cocktails over the same period due to my preference for a combination of both sweet and dry vermouths. 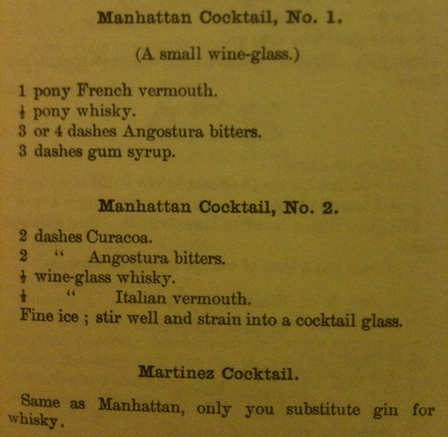 Then there is the question of what gin? When Byron says gin, does he mean English old tom gin or Dutch genever - drier styled English gins (London dry) were not broadly available in America until well into the 1890s. Fact is, there was little English gin distributed in America during the nineteenth century at all. To quote David Wondrich from his excellent 2015 Imbibe, "In the 1850s, the port of New York was clearing between 4,500 and 6,000 120-gallon pipes of genever a year (roughly equal to some 2.7 to 3.6 million 750-millilitre bottles) as opposed to 10 to 20 pipes of English gin. What's more, if distillers' handbooks are to be believed, domestic American gins were modelled on the heavier, maltier Dutch-style rather than the lighter, cleaner English style."

If, as appears likely, the Martinez emerged as a riff on the whiskey-based Manhattan, it is not only availability that would have made Dutch genever the more likely 'gin' to have been used in the first Martinez. The mellower, rounder and particularly malty style of the malt-wine heavy Dutch genevers of the period are much closer to that of whiskey, the original ingredient, than the sharper piney English old tom gins. It was a simple riff by the bartender who substituted a malty genever for whiskey to make the first Martinez.

The early period of American cocktail bartending was of course dominated by the flamboyant 'Doctor' Jerry Thomas who preceded his compatriot, Byron, above by publishing the first known bartender's guide in 1862. Tellingly, the Doctor omitted the Martinez from this first edition and second 1876 edition. Whether this was because he'd simply not come across the drink, it had not yet come into being, or he simply forgot it is unknown. However, claims that he invented the Martinez seem unlikely. His bravado was such that he'd have told all who'd listen leaving a paper trail for us to follow, as is the case for the Tom & Jerry, a drink he defiantly didn't create.

In that first 1862 edition of Jerry Thomas' book, he includes 17 gin drinks with only one, 'Punch by Soyer', specifying what kind of gin, "old gin". As mentioned above, given the lack of English gin available at the time, either sweetened or dry in style, it is assumed that when he writes "gin", Thomas was actually referring to genever, which at that time would have been 100% malt wine genever.

Although frustratingly he does detail recipes for how to make "Domestic", "English", "Holland" and "London Cordial" gins. 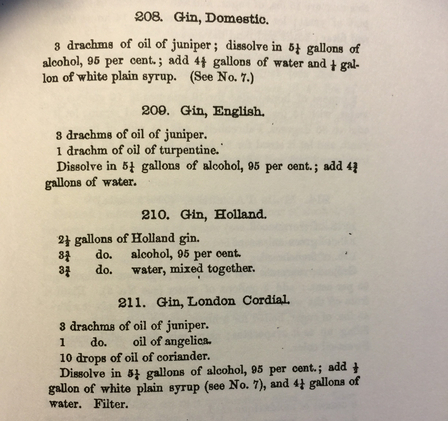 The Martinez Cocktail does appear in the 1887 edition of Thomas' The Bar-tender's Guide (published posthumously two years after his death) specifying "1 pony of Old Tom gin" and apart from the base spirit, the recipe is strikingly similar to for the Manhattan Cocktail on the opposite page. 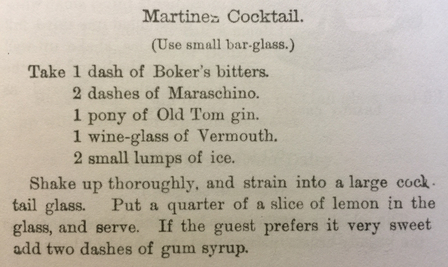 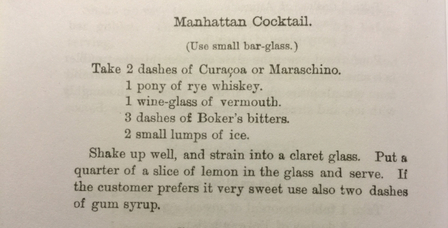 This question of dry or sweet vermouth is not answered in the next appearance for a cocktail specifically named Martinez in Stuart's Fancy Drinks from 1896. Indeed this appears to be little more than a rip off of O H Byron's 1884 book with both sweet and dry vermouth versions that are virtually identical to Byron's.

The next appearance for the Martinez in the 1905 Consolidated Library of Modern Cooking and Household Recipes, volume 5 by Christine Terhune Herrick and M. Harland (page 55,read on-line here) also fails to answer the vermouth question but continues the trend for the use of old tom gin over Dutch genever. If (as I believe was the case due to availability and flavour) genever was in the original Martinez, it would appear to have quickly fallen out of favour in this and other American cocktails as old tom and then London dry became fashionable. It's worth pointing out that this 'Consolidated Library' recipe is very similar Jerry Thomas' above and also to that for the Manhattan which precedes it in the book.

"The Martinez Cocktail is very similar to the Manhattan Cocktail, but gin is used instead of Whiskey.
Fill the bar glass half full of broken ice and add:
2 dashes of Orange Bitters
3 dashes of Curacao or Maraschino
¼ gill of Old Tom Gin
¼ gill of French Vermouth
Stir up well, strain into a cocktail-glass, add olive or cherry to taste, and squeeze lemon peel on top.
This drink is very popular on the Continent."

Interestingly, Vermeire goes on to add, "In England the Martinez Cocktail generally contains the following ingredients:
2 dashes of Orange Syrup
2 dashes of Angostura Bitters
¼ gill of Plymouth Gin
¼ gill of French Vermouth
The whole stirred up in ice in the bar glass, strained into a cocktail-glass with lemon-peel squeezed on top. Olive or cherry according to taste.

"The Third Degree is a Martinez Cocktail (Continental style) with a dash of Absinthe and an olive, but 2/6 gill of Gin and 1/6 of French Vermouth should be used.

"The Fourth Degree is a Martinez Cocktail (Continental style) with a dash of Absinthe and a cherry, but ¼ gill of Gin, 1/8 gill of French Vermouth, 1/8 gill of Vermouth should be used." 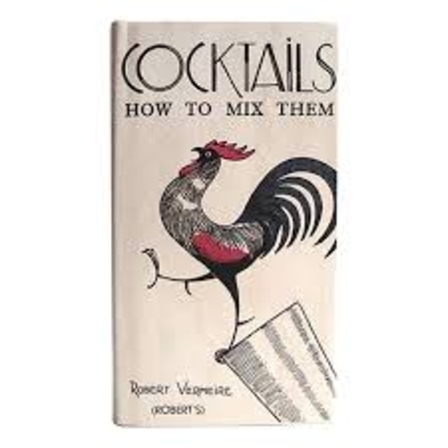 • The Martinez emerged as one of many variations of the Manhattan, and until recent times had little traction, but endured mostly due to its appearance in Jerry Thomas' seminal 1887 'Bar-tenders Guide'.

• The availability of English style gins at the time makes it likely that the first Martinez, made sometime in the 1860s or early 1870s, was based on Dutch genever, and indeed its flavour profile is nearer that of whiskey, the ingredient that was simply switched in this 19th century riff on a Manhattan.

• While the first Martinez might have been made with genever, the fashion for English old tom and then London Dry meant that genever was all but forgotten by the late 1880s until its revival as a cocktail ingredient in recent years.

• Once again, it is only availability that suggests early Martinez recipes were made with 'sweet' Italian vermouth rather than 'dry' French vermouths. As with gin, the fashion towards dryness led to dry vermouth becoming the norm in a Martinez, that is until recent decades when Vermouth di Torino has become more fashionable with bartenders and so has found its way back into the Martinez as the default vermouth. (Not all fashion-led trends are bad!)