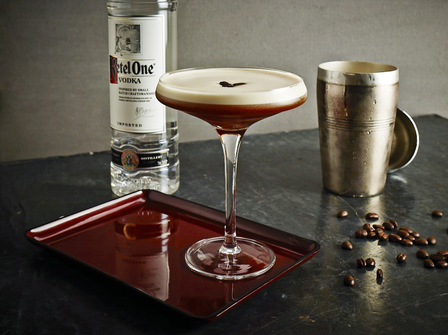 Likened to a Vodka & Red Bull for the discerning, the caffeine-loaded Espresso Martini consists of generous shots of vodka and espresso with coffee liqueur. Although far from a true Martini, the Espresso Martini is perhaps the best-known of the contemporary classic cocktails to emerge from the 1990s.

Like every cocktail, an Espresso Martini is only as good as its ingredients. So you'll need a decent vodka and freshly made espresso coffee. The crema (creamy foam) on top of the coffee is key to the success and appearance of the finished cocktail.

It may seem perverse to pour a steaming hot shot of espresso coffee into a shaker and then immediately shake with ice, rather than using cold/iced coffee, but let the coffee cool and so the crema die and you'll kill the cocktail.

As with an espresso coffee, the amount of sugar required to balance this cocktail is very much down to the tastes of the individual drinker but Dick Bradsell's original recipe included sugar syrup. I've omitted sugar from our Espresso Martini recipe but depending on your coffee you may want to add 2.5ml (half a bar spoon) or even 5ml (1/6oz) of rich sugar (2:1) sugar syrup. I like to add muscovado syrup but honey can add an extra dimension. And if you are using a very dry/bitter coffee liqueur, then added sweetness becomes more necessary than optional.

Espresso Martinis are usually garnished with three coffee beans arranged in a petal formation floating in the centre of the drinks creamy surface. The floating of three beans comes from the traditional serving of Sambuca in Italy where the floating beans are called con la mosca, meaning 'with the fly'. Three beans represent health, wealth and happiness.

The drink we know today as the Espresso Martini started life as the far more fittingly titled Vodka Espresso. Created in 1983 by Dick Bradsell at the Soho Brasserie, London for a customer, said to be a "top model" who'd asked for a drink to "wake her up, and fuck her up."

When asked as to exactly why he settled on that drink that day, Dick told me: "The coffee machine at the Soho Brasserie was right next to the station where I served drinks. It was a nightmare, as there were coffee grounds everywhere, so coffee was very much on my mind. And it was all about vodka back then - it was all people were drinking."

There's been much speculation over the decades as to the identity of the sleep-deprived "model" whose order to alleviate the affliction led to Dick making the first Vodka Espresso. Some say it was Kate Moss, others Naomi Campbell, but Moss was only nine at the time and Campbell 13 years old. Dick followed traditional bartending convention, believing that folk should be able to go into a bar, relax, have a good time, drink a bit too much, and, ideally, tip well. And importantly, what they did or said in that bar should stay in that bar. He kept his guest's secrets. The probable truth is, the model in question was far from being a "supermodel" and could well have been called Brian.

Dick's original recipe called for vodka, sugar syrup, freshly made espresso, and two types of coffee liqueur (Kahlúa and Tia Maria as they were pretty much all that was available at the time). As the eighties turned into the nineties people were still drinking vodka but this was the decade of the Neo Martini - any cocktail served in a V-shaped glass and based on vodka was considered a "Martini", and such Neo-Martinis were what bar-goers wanted and ordered. Dick tweaked and re-christened his Vodka Espresso to the then more desirably named Espresso Martini.

Finally, to complete his trilogy of coffee cocktails, in 1998 Dick renamed his creation Pharmaceutical Stimulant and served it on-the-rocks at the then newly opened Pharmacy restaurant in Notting Hill where Damien Hirst artwork hung and Dick was bar manager (the site on Notting Hill Gate is now a Waitrose store).

So, the Vodka Espresso, Espresso Martini and Pharmaceutical Stimulant are essentially the same drink that morphed over a couple of decades to suit the tastes of a changing audience and situation.

20 best riffs on an Espresso Martini