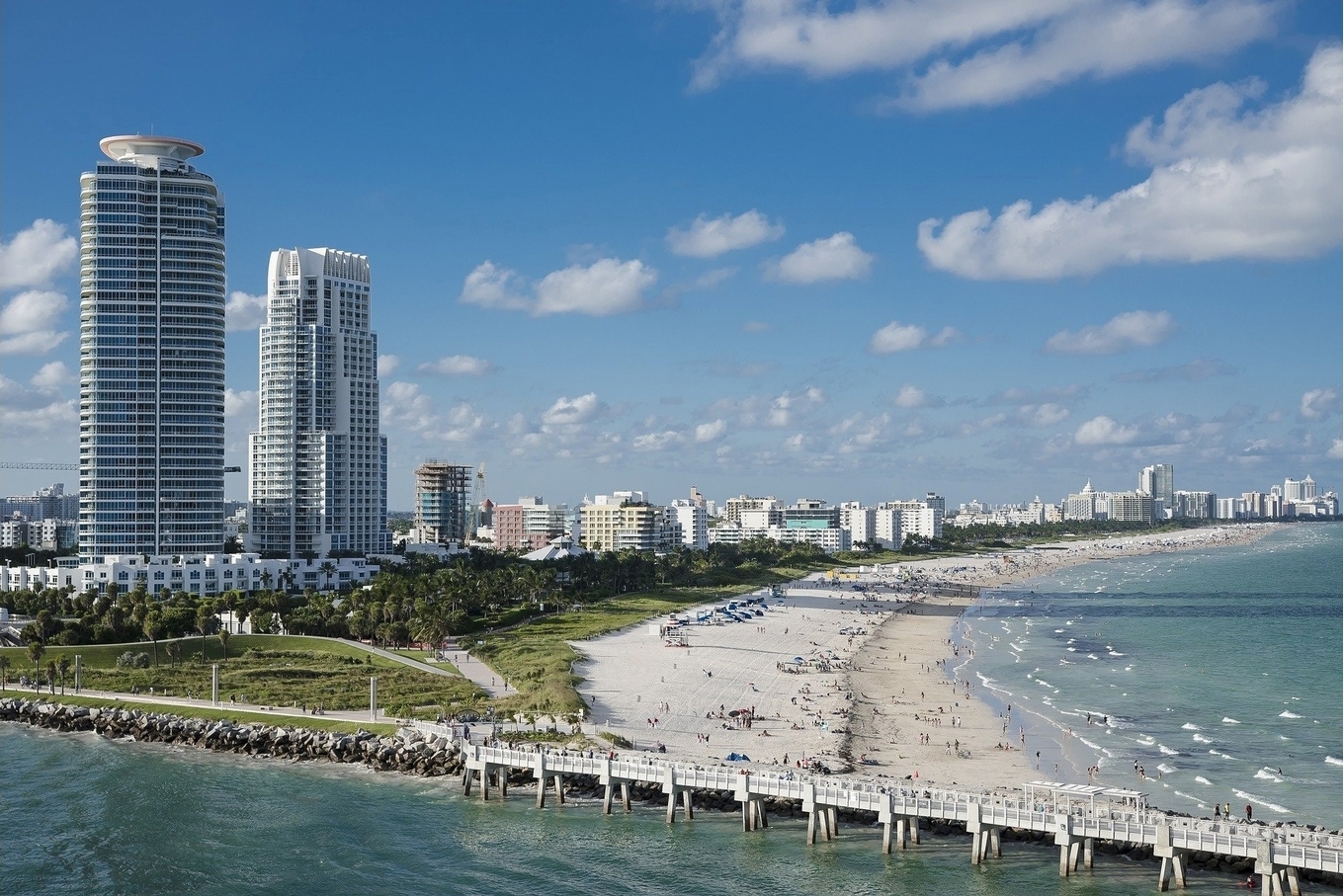 One of the most famous cocktails from the 1970s, the Harvey Wallbanger is basically a Screwdriver (vodka and orange juice served tall over ice) with a float of Galliano liqueur. It was a huge drink in its era but its reign barely made it into the 1980s as it fell prey to changes in fashion, packaged juice and even Galliano.

This is a drink that must be made with freshly squeezed orange juice. You may be too lazy to squeeze orange juice for breakfast but at a hotel or bar, you'll have experienced just how good freshly squeezed juice can be. It's a very different experience from the comparatively sweet and marmaladey packaged orange juices. Add a splash of vodka and the aromatic herbal peppermint freshness the float of Galliano brings to this tall refreshing drink and you can start to see why the Harvey Wallbanger was a hit in the Seventies.

Like all simple three-ingredient cocktails making a tasty Harvey Wallbanger is all down to your proportions, quality of ingredients and how you mix them. We think our Harvey Wallbanger recipe is pretty good and in our experience benefits from stirring the orange juice and vodka separately with ice and then straining over fresh ice, rather than the traditional method of merely building the drink in the glass.

Be sure to also try Harvey Wallbanger's 'rude' sibling, the Freddy Fudpucker with tequila in place of vodka.

Legend has it that 'Harvey' - Tom Harvey to be exact, was a surfer at Manhattan Beach, California [photo above]. His favourite drink was a Screwdriver with added Galliano - the ingredients that comprise a Harvey Wallbanger. One day in the late sixties, while celebrating winning a surfing competition, he staggered from bar to bar, banging his surfboard on the walls, and so a contemporary classic cocktail gained its name.

However, a competing story credits the drink's creation to Bill Donner, the host of a house party held in the mid-sixties in Newport Beach, California. One of the guests, Harvey, was found banging his head the next morning, complaining of the hangover this drink induced.

We have booze historian, Robert Simonson, to thank for his investigations into the true origins of what was one of the most popular drinks of the 1970s. He unearthed a piece in The Hartford Courant published 3rd September 1977 titled Retired Mixologist To Teach Tunxis Drink-Making Class at Tunxis Community College which goes on to say, "...its not the mix that makes a drink, but the mixer, says the instructor of the noncredit course, Donato 'Duke' Antone. He is the creator of the Harvey Wallbanger and more than 50 nationally consumed drinks."

So there you have it. Written evidence. However, Robert Simonson expresses some scepticism but does theorise that Antone created the cocktail while working as a drinks marketing consultant for George Bednar, the Marketing Director of McKesson Imports Co during the late 1960s, the then US importers of Galliano Liqueur. This theory is helped by a sentence in the same 1977 Courant piece, "Antone...has not limited himself to mixing drinks. Rather, he has been active in all aspects of the liquor industry ranging from restaurant design to marketing." Simonson surmises that Bednar approached Antone in 1966 to create a cocktail with which to market Galliano. After all, Antone was noted for creating a Galliano-heavy cocktail called the Italian Fascination and is credited with inventing the Freddy Fudpucker, basically a Harvey Wallbanger with tequila.

So it is Donato "Duke" Antone who is not only said to have created the Harvey Wallbanger, but legend (or good marketing) has it that he also made the drink for that surfer called Tom Harvey while bartending at Blackwatch Bar on Sunset Boulevard in Hollywood way back in 1952.

George Bednar was certainly a good marketeer, who commissioned a commercial artist by the name of Bill Young to design a poster to promote Galliano via the Harvey Wallbanger cocktail. Bednar is credited with penning the tagline for the advertisement himself: "Harvey Wallbanger is the name. And I can be made!". 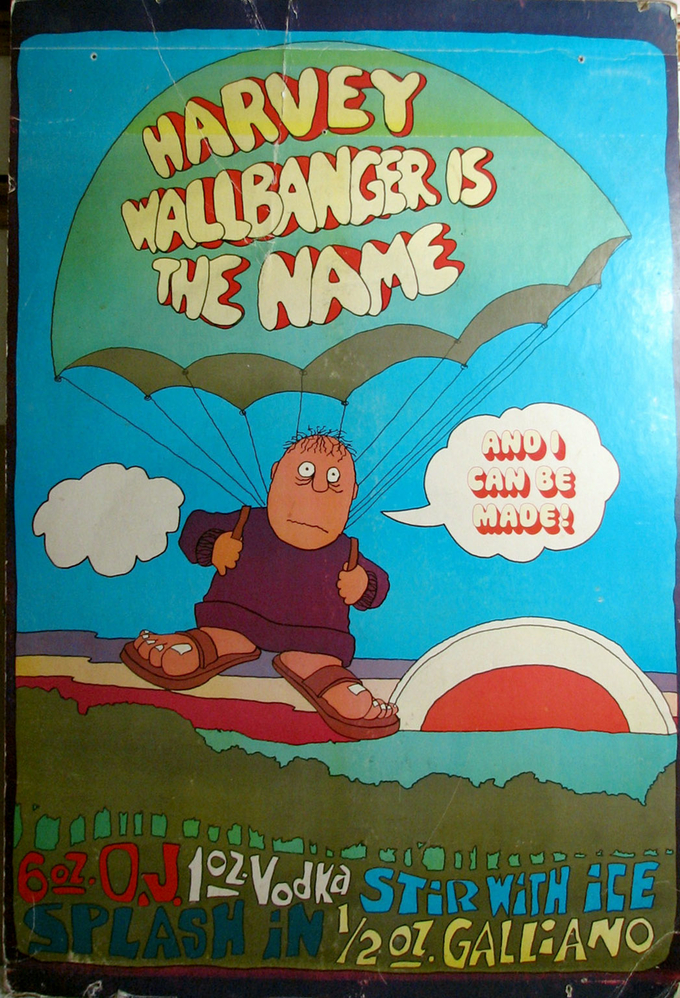 The pop art advert featuring a sandal wearing monk-like hippy with attitude proved a massive hit and as the Sixties turned to the Seventies the character was reproduced on T-shirts, mugs and bumper stickers, while the cocktail it advertised flew across bars.

By the summer of 1973, advertisements appeared for a pre-mixed canned version of the Harvey Wallbanger, "The Club Wallbanger" made with Smirnoff Vodka. Perhaps the canned version is what helped eventually kill the Harvey Wallbanger. After all, made with fresh orange juice it's a great drink - as is the Screwdriver. However, made with pasteurised orange juice it is just another Disco Drink that was best forgotten in the Seventies. 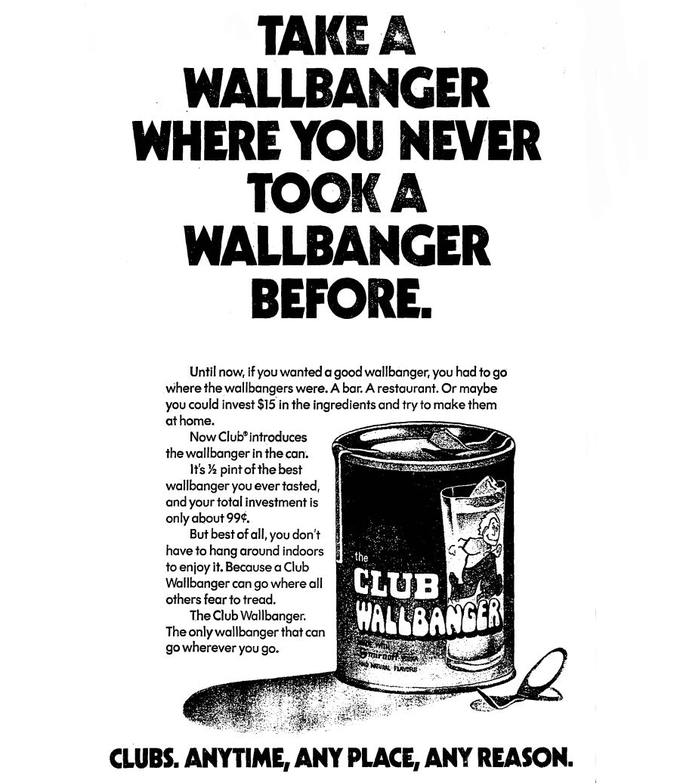 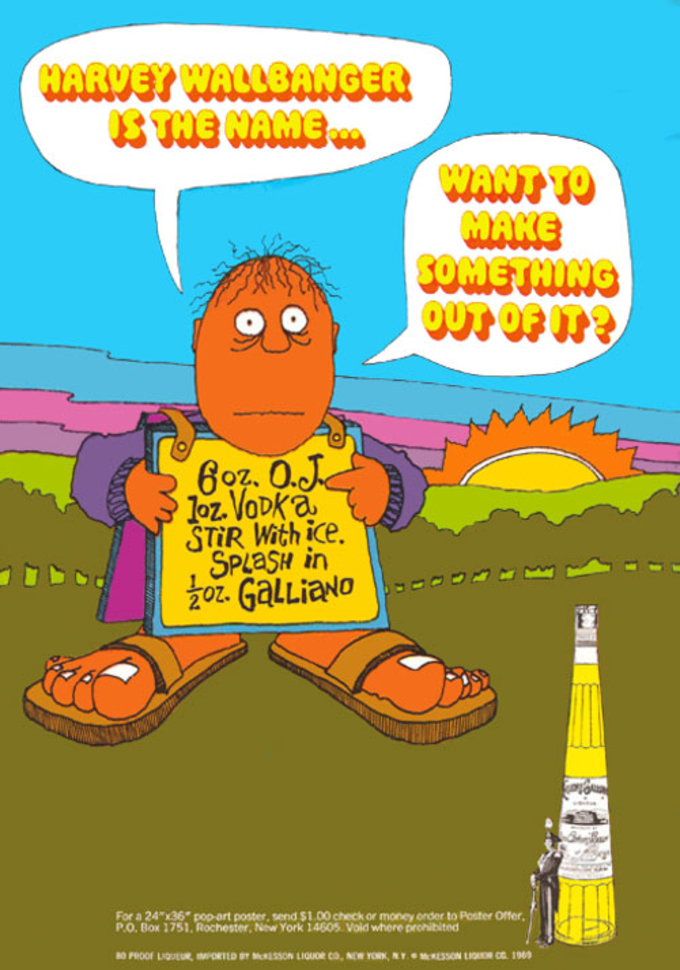