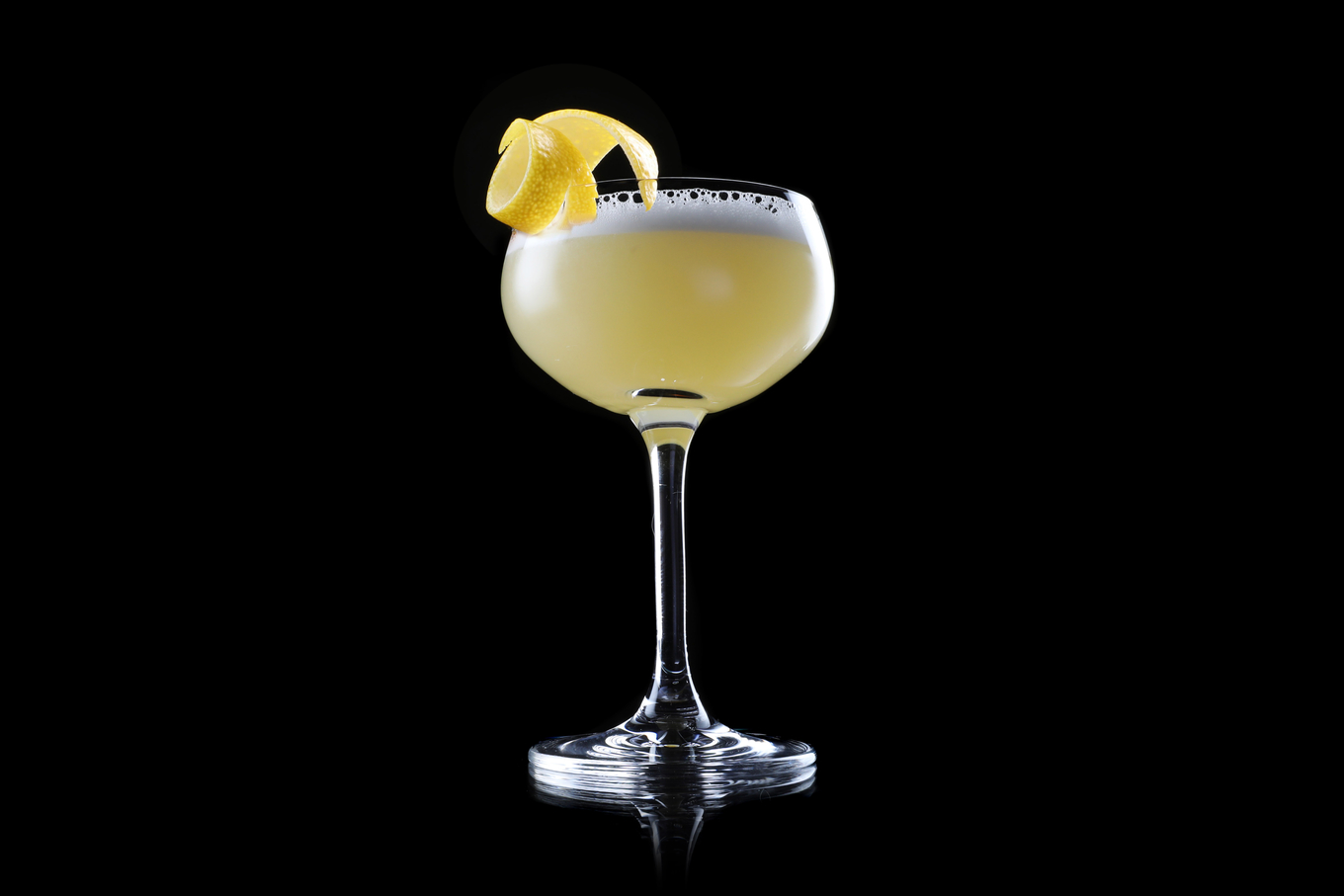 Shaken and served straight-up in a coupe glass, the White Lady cocktail is made with gin, triple sec and lemon juice. Many also add egg white and sugar syrup (as per my own White Lady recipe ). It is garnished with a lemon zest twist.

While the merits of adding egg white and sugar may be debated by some the gin, triple sec and lemon trio are beyond reproach - although there are subtle variations as to their proportions. However, when Harry MacElhone, from Dundee, Scotland, first created the White Lady, while working at London's Ciro's Club in 1919, it consisted of equal parts brandy, crème de menthe and Cointreau, shaken and strained into a cocktail glass. This recipe is recorded in his 1922 Harry's ABC of Mixing Cocktails and repeated the following year as cocktail 274 in Harry of Ciro's ABC of Mixing Cocktails[below].

MacElhone is said to have created the version of the White Lady we know today (with gin, triple sec and lemon juice) in 1929 while at his own Harry's New York Bar in Paris, France. This is reaffirmed in modern-day versions of his book by his family.

MacElhone's claim to the creation of the gin-based White Lady is disputed by most, including London's The Savoy Hotel who say this now dominant version was first created at the hotel's The American Bar by Harry Craddock. The story goes that F. Scott Fitzgerald's wife, Zelda, was drinking at The Savoy and Craddock named the drink after her because she was a platinum blonde.

When The Savoy's American Bar was being refurbished in 1927, Craddock is said to have placed a cocktail shaker with the ingredients for a White Lady in the brickwork being laid as part of the building work. This is two years prior to when MacElhone is said to have re-worked his recipe at his new bar in Paris. However, Craddock's buried shaker is yet to be unearthed and this 1927 burial is perhaps being confused with Craddock burying another shaker in 1939, this time at The Dorchester Hotel when he moved there. This later burial's inclusion of a corked vial of White Lady, along with four other cocktails and accompanying recipes, is widely reported in newspapers of the time, many of which also say Craddock created the White Lady in 1920. That's probably what the press release said.

A recipe for the White Lady appears in Craddock's 1930 The Savoy Cocktail Book[image above] but he makes no claim to his creation. MacElhone's revised White Lady recipe is "1/3 lemon juice, 1/3 Cointreau, 1/3 gin" - the same ingredients but Craddock's recipe uses twice as much gin to make a properly gin-based sour cocktail.

Whether Craddock adapted MacElhone's recipe or MacElhone adapted his to resemble Craddock's so he could continue to claim the popular version as being his own is further muddied by a third and fourth contender for the creator of the White Lady Cocktail.

The 2021 Oxford Companion to Sprits and Cocktails cites a vintage Along the Wine Trail column in the New York Sun where regarded drinks writer, G. Selmer Fougner, identifies the White Lady's origin as being the bar at London's Quaglino's restaurant.

However, there is a greater weight of evidence behind the true originator of the (gin-based) White Lady being Victor Cabrin, the regarded bartender at the bar named after him at London's Grosvenor House. An advertisement for Booth's Dry Gin in The Illustrated London News on the 5th May 1934 features Victor mid-shake while making his White Lady. 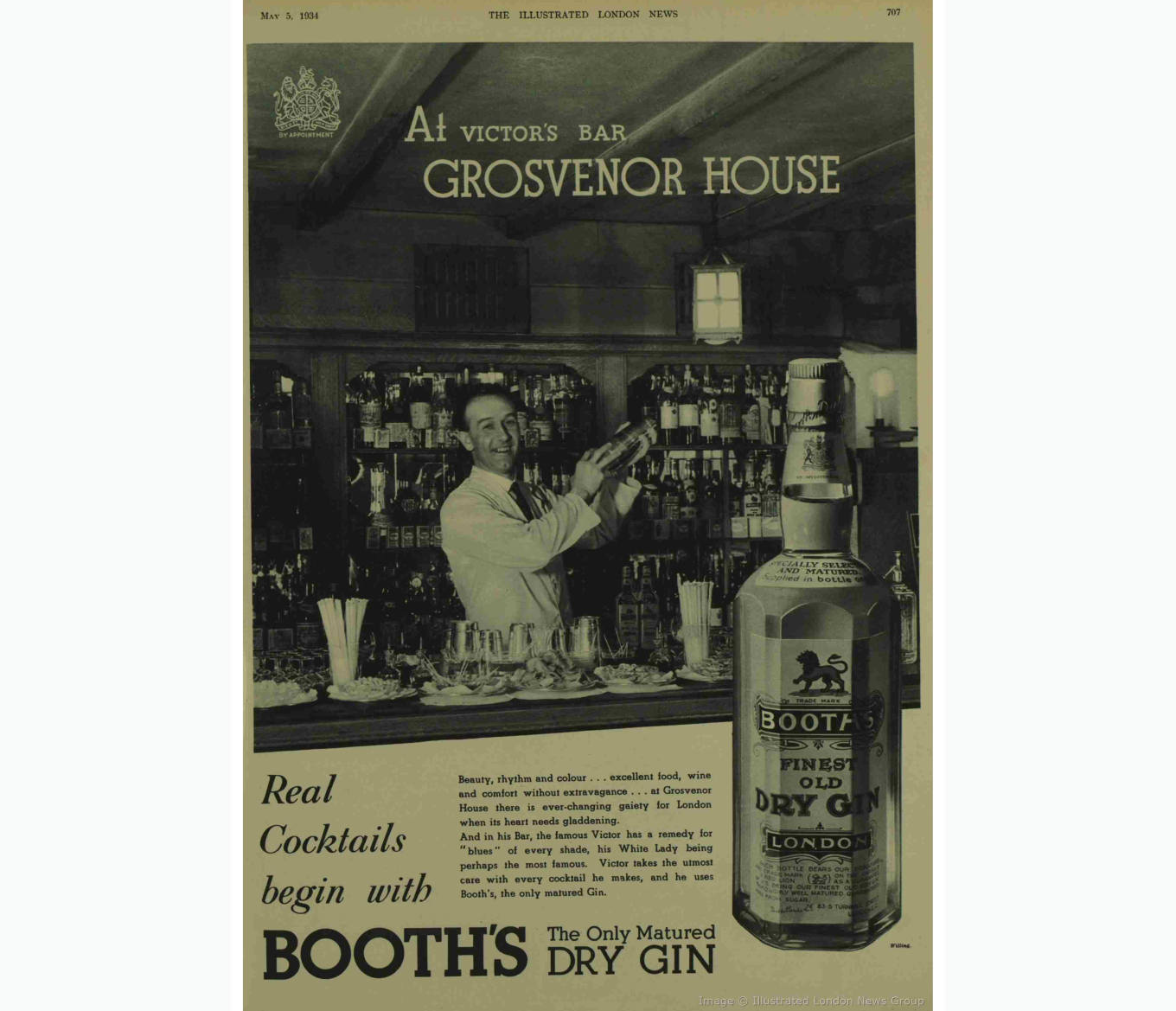 The Illustrated London News 5/May/1934

Victor's claim is further supported by a piece by Miss Ann Todd in The Daily Mirror on 30th October 1935, titled "Go and Drink Coal!" proclaiming Victor as not just the creator of the White Lady but also the Blue Lady and Black Lady cocktails.

Go and Drink Coal!
Fashionable cocktail drinkers will in future be seen swallowing what looks like liquid coal - but isn't.
It's the "Black Lady" cocktail, latest invention of Victor, the famous Grosvenor House bartender, who originated both the "White Lady" and the "Blue Lady."
He calls it a "pure black mammy" without a suspicion of mulatto[sic]. Here is what its made of:-
Cocoa syrup.
Cocoa kola with amer picon.
White of egg and akvavit.
This colour idea in cocktails is interesting as long as fashion doesn't decide that those who drink them must dress to match, or have nails coloured to contrast!"

Then a piece titled "Originator of the White Lady Cocktail" in the Eastbourne Chronicle on the 23rd November 1946 reports on Victor's move from the Grosvenor House to the local Queen's Hotel.

ORIGINATOR OF THE "WHITE LADY" COCKTAIL
CELEBRATED BARMAN AT THE QUEEN'S HOTEL
The originator of the famous cocktail, "White Lady," Mr. Victor Cabrin, is now supervising the new lounge bar of the Queen's Hotel, having come to Eastbourne after many years service in "Victor's Bar" at the Grosvenor House Hotel.
"Victor" invented the cocktail in 1929, and the flavour quickly caught on and has proved a popular drink in bars all over the world.
One of the most amusing incidents "Victor" recalls was when a young couple asked him to mix up a special drink which they called "Two Tigers in a taxi."
"I was horrified when they told me what to mix up," he told a "Chronicle" reporter, "and when they had drunk it my fears were fully justified for they both turned green"!
"Victor" cannot mix his famous cocktails at the moment for with the shortage of eggs and cointreau he is unable to do justice to the "White Lady."

Truth is, the real bartender behind the White Lady's creation is lost in time but it remains Craddock who remains most identified with the White Lady.

Early recipes, including MacElhone's own Harry's ABC of Mixing Cocktails and Harry Craddock's 1930 The Savoy Cocktail Book make no mention of the use of egg white. This first appears a White Lady recipe published in The Sacramento Bee newspaper on 17th December 1936.

The first White Lady recipe with egg white in a specialist cocktail book appears in Lucius Beebe's 1946 The Stork Club Bar Book as one of a "miscellaneous clutch of cocktails which Mr. Billingsley's day-shift Ganymedes report as being in current high favor with the carriage trade."

Led by The Savoy's American Bar itself where Peter Dorelli always made his signature White Lady with egg white, this addition has become the norm in most countries. However, while the Japanese enjoy raw fish the trend for adding raw egg to sour cocktails is yet to catch on there with Japanese bartenders such as Hidetsugo Ueno San vehemently against egg white being used in any cocktail.

I believe the Japanese omission of egg white is more a cultural judgement than one of taste and egg white definitely rounds a White Lady. It also makes it white. Beneath the attractive fluffy white foam produced by aerating the egg lies a dirty yellow drink that hardly befits the name. Those against the use of egg white argue that the drink is not named after its colour but the numerous ghostly white ladies of mythology. Maybe, but dirty yellow is not as visually appealing as a fluffy white head, and the drink tastes better with it.