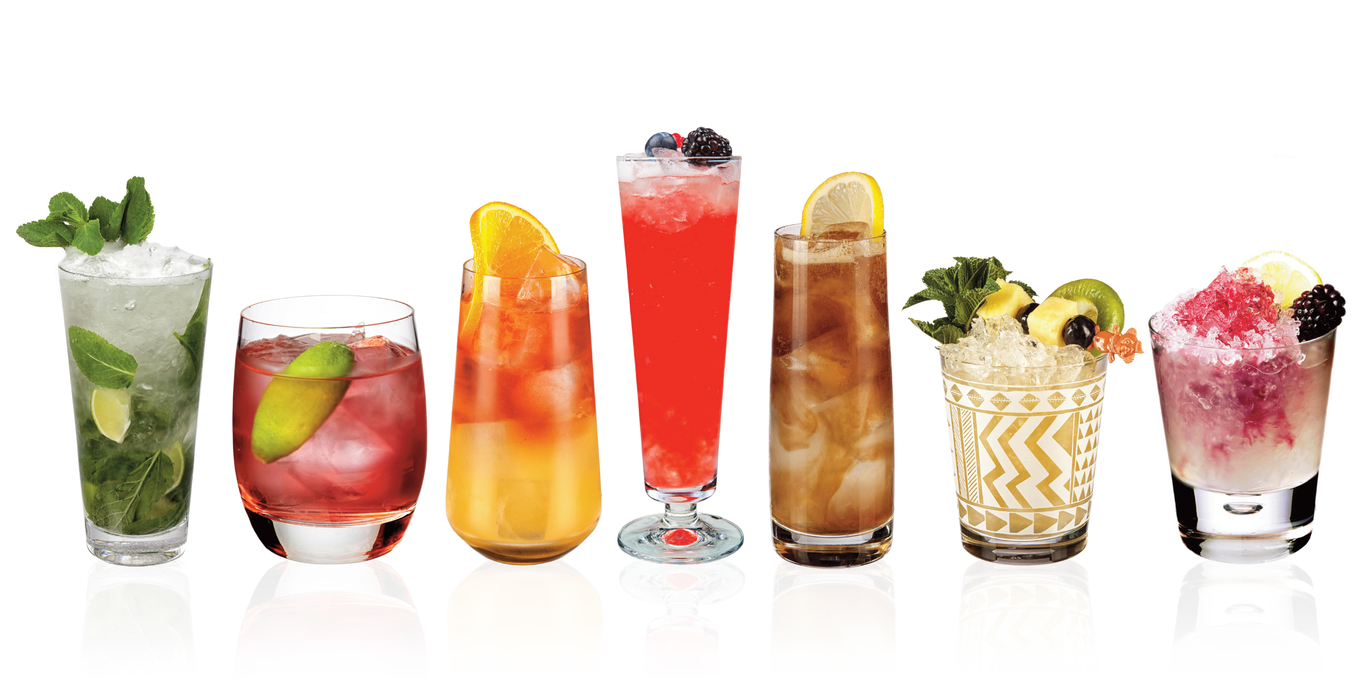 The 1990s was the decade when "the cocktail renaissance" started and what some describe as "craft cocktails" became fashionable.

By the mid-1990s, cocktails and cocktail bartenders (most notably Dick Bradsell and Dale DeGroff) were being written about in glossy consumer magazines and folk like me launched magazines dedicated to cocktail culture. The "for mash get Smash" culture of the 70s and 80s turned to fresh and even organic. Good bars started using freshly squeezed juices and "Mexican elbows", and every bar counter gained at least one fruit bowl. Sour mix became a pejorative term.

The 1990s turned into the decade of the V-shaped glass and any cocktail served in such a glass could be, and usually was, christened a member of the Martini family. With the fashion for 'fresh' so the fashion for crisp clean vodka continued to grow from the 80s. Consequently, any cocktail combining fresh fruit and vodka served in a V-shaped glass was bound to be a hit - enter fresh fruit martinis - the Watermelon Martini and the French Martini.

Cranberry juice, and for a while even white cranberry juice, became very fashionable, partly due its perceived health benefits. Inevitably, cranberry juice found its way into cocktails, most notable the Cosmopolitan, Seabreeze and Woo Woo.

Looking back, the start of the cocktail renaissance was a sweet, innocent time - without social media or even email for much of the decade. Mobile phones were a new thing and we used fax rather than sending attachments. I had hair and bartenders didn't - they tended to be clean shaven and without tattoos, waistcoats or natty headgear. How things have changed.

Before the Cosmo took over the Appletini was a huge cocktail stateside where it often consisted of simply vodka, sour apple liqueur and lime cordial.
Appletini recipe

Dick Bradsell created this gin laced contemporary classic in the 1980s but during the 90s this became a hugely popular cocktail, appearing on cocktail menus in bars across the UK - and now the world.
Bramble recipe

Created in 1996 by one of the other most influential people on the UK bar scene, Salvatore Calabrese, this is another gin laced cocktail that can now be found on bar menus the world over.
Breakfast Martini recipe

Created in 1996 by Tony Abou-Ganim, this spiced rum based cocktail never really took off outside of America, but in the USA, particularly the West Coast, it was huge.
Cable Car recipe

Towards the end of the 1990s, cachaça became the hip new exotic spirit to escape Brazil and bartenders, particularly in London, were inspired to pick up their muddlers (also a bartending tool that became popular in the 90s) and start making Caipirinhas.
Caipirinha recipe

A cocktail from a much earlier decade, during the 1990s it became commonplace to see sugar cubes being dosed with Angostura in readiness to be drowned with cognac charged champagne.
Champagne Cocktail recipe

The cocktail that more than any other defines the decade, the Cosmopolitan was created in 1988 by Toby Cecchini but it was Dale DeGroff that perfected the Cosmo in 1996 and, with the help of both Madonna and Sex In The City, made it a huge hit.
Cosmopolitan recipe

Encouraged by Dick Bradsell, in 1997 I started something of a one-man crusade to make the Daiquiri popular. It was my first bar call in every bar I visited, and I visited a lot of bars. Thanks to my magazine, and like-minded folk like Dick, classic well-made Daiquiris became commonplace on bar menus across the UK. Sadly, in America when I asked for a Daiquiri, they often though I was asking for a Tanqueray and I'd be presented with a Martini. My English accent perhaps.
Daiquiri recipe

The Dry Martini was the cocktail everybody in the UK aspired to be drinking during the 1990s but few actually did. However, across the pond in the USA the Vodkatini was "a thing".
Vodkatini recipe

Of the many cocktails Dick Bradsell created this is perhaps his best and certainly the most successful. It started off as the Vodka Espresso in 1983 and became, like so many other cocktails, a "Martini" in the 1990s. Dick had a knack of choosing catchy names for his drinks.
Espresso Martini recipe

Thought to have been created in the late 1980s, the French Martini, helped along by advertising by Chambord, became a hit in the 1990s. Fruity, vodka based and served in a V-shaped glass - it was bound to do well.
French Martini recipe

Created in the mid-1900s by Paul Harrington this became a popular cocktail in California, USA.
Jasmine recipe

Created in the 1970s and popular throughout the 80s, the Long Island Iced Tea endured into the 1990s with bartenders challenged to pick up five bottles and simultaneously upend them into an ice-filled glass. I blame Tom Cruise!
Long Island Iced Tea recipe

Created by Trader Vic himself in 1944 and helped by continued promotion in his chain of restaurants, the Mai Tai was the Tiki drink that found mass market appeal in the 1990s.
Mai Tai recipe

The cocktail renaissance made many bartenders look to Cuba and its enviable cocktail heritage. Muddlers were all the rage, as was crushed ice. Hence, Mojitos served with crushed ice became very popular towards the end of the 1990s.
Mojito recipe

I credit London bartenders for saving this cocktail from muddled neon red cherries and orange slices during the 1990s. Different bartenders specified how many times the drink should be stirred with some saying it took 5 minutes to make a good one.
Old Fashioned recipe

Another brilliant cocktail by Dick Bradsell that during the 1990s could be found on many cocktail menus across the UK and further afield.
Polish Martini recipe

Long, fruity and refreshing, this gin laced cocktail rode the fresh fruit wave to find its way onto cocktail menus during the 1990s.
Raspberry Collins recipe

Created by Dick Bradsell, this is one of the most popular vodka based fresh fruit martinis to emerge during the 1990s.
Raspberry Martini recipe

Thought to have been created in New York City during the 1980s but perhaps dates back to the 1960s and the Harpoon cocktail, this summery drink's 1990s popularity was helped by marketing efforts by both Ocean Spray Cranberry and Absolut Vodka.
Seabreeze recipe

Sex On The Beach

Some cocktails clung on from the 1980s, particularly outside the craft cocktail scene.
Sex On The Beach recipe

Created by the tequila evangelist that is Julio Bermejo, Tommy's Margarita travelled from San Francisco to become one of the world's best known cocktails. (PS. Due to the lack of liqueur, it's really a tequila sour and not a margarita at all.)
Tommy's Margarita recipe

A cocktail which emerged from Berlin in the mid-1990s, this still graces many a German drinks list today.
Watermelon Man recipe

Perhaps the best-selling of the many fresh fruit martinis that took London by storm in the 1990s.
Watermelon Martini recipe

Created by Dale DeGroff in the late 1990s, this cocktail crossed the Atlantic to London in the noughties.
Whiskey Smash recipe

Another one of those eighties cocktail that clung on into the nineties.
Woo Woo recipe